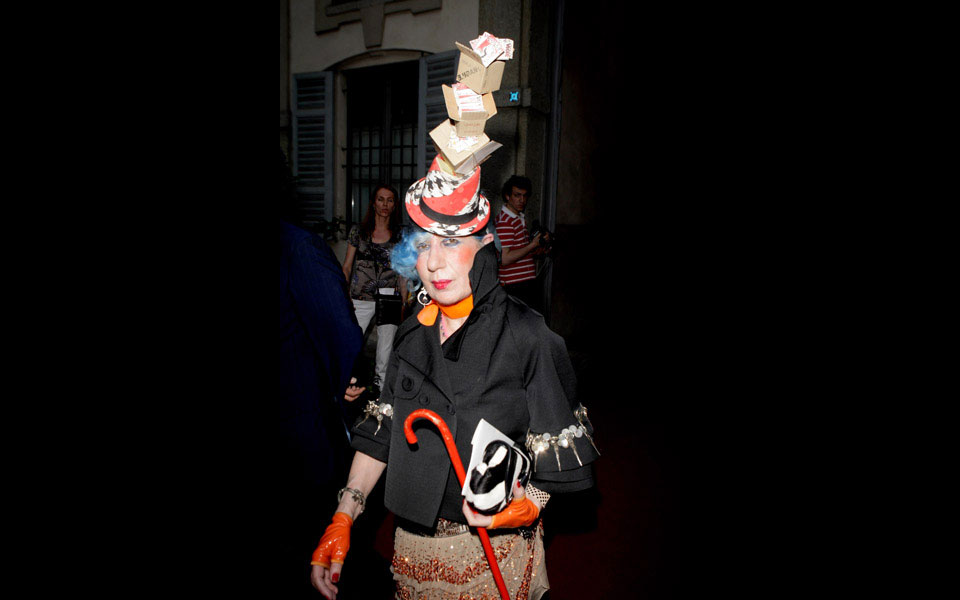 With Alfa Castaldi, her late husband and Photographer, Piaggi was introduced to magazine publishing, immediately establishing her voice as, according to Manolo Blahnik, “the only authority on frocks left in the world. “The electric blue mark she left on the fashion industry is as influential today as it was when she was the Editor of Arianna magazine in the sixties.Whether she was wearing a Zandra Rhodes silk empire-dress trailing beads and pheasant feathers as Lagerfeld sketched her in 1973 or creating her own exposition about clothing: Doppie Pagine(the Italian term for double pages), in which she analyzed and illustrated the origins of this season’s collections in Italian Vogue—Piaggi had an eccentric yet structured way of dressing, “My philosophy of fashion is humour, jokes and games. I make my own rules. I never pick up something and just throw it on my back like that. There’s a little bit of study, and it’s always better if I think about what I’m going to wear the night before the next day, “Piaggi has said.

She devoted her life to creating the art of surreal dressing: miniature top hats by Milliner Stephen Jones that adorned her electric blue curls since 1982; a “white Cotton Edwardian suit with bustle, staff and a white feather pompom in her hair on an after dinner promenade in the park; or a pretty orange corset from Karl Lagerfeld’s Chloe collection circa 1976–she always looked as though she would leap off the canvas of a Salvador Dali painting.

She “knew how to take a very Italian way of living and thinking fashion and make it international, turning it into the highest expression of art and culture,” said Designer Giorgio Armani. She has left a permanent impression on the fashion industry, Looking down on us, her head adorned with a Stephen Jones halo.