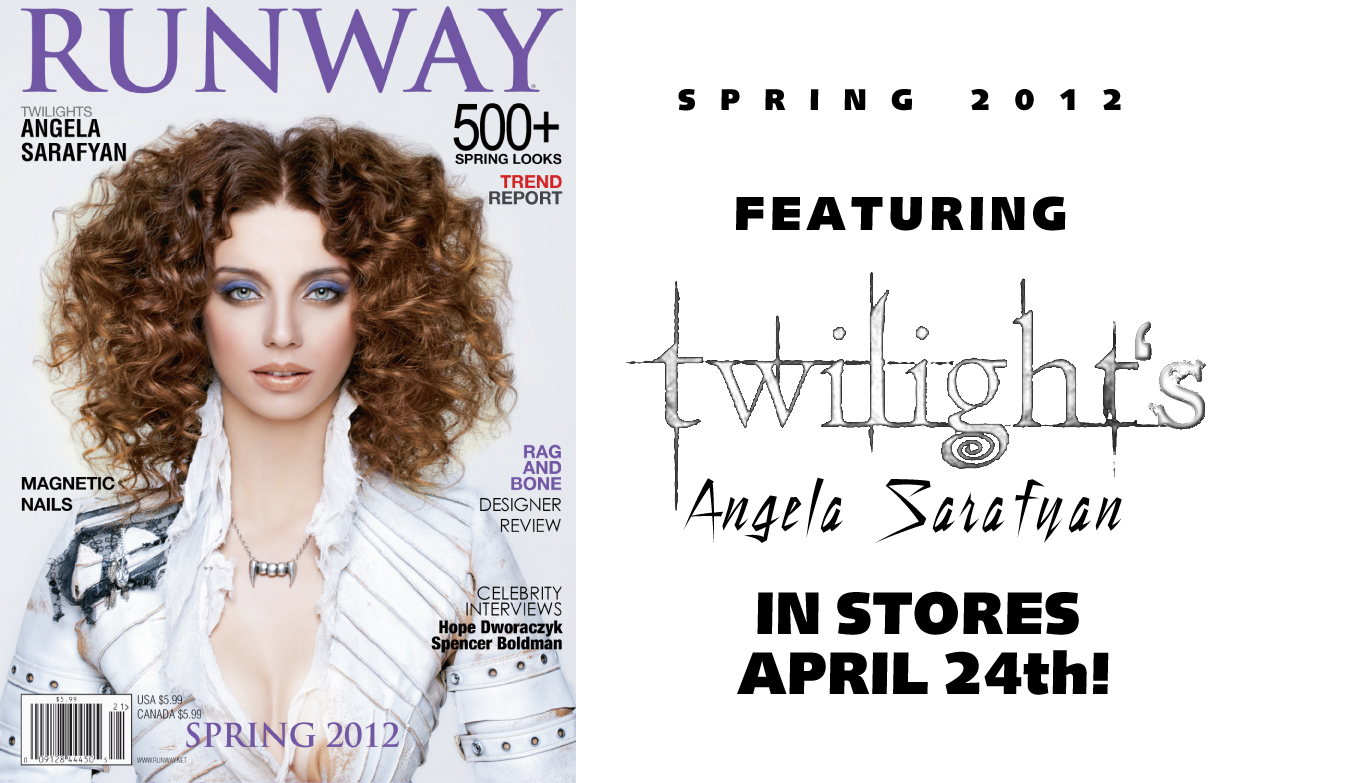 On Thursday April 19th, Runway will be hosting an the a major fashion industry and issue release event featuring FORD models for a sneak peak at this years hottest swim suit designers. The Event will take place at The Mint in beautiful Scottsdale, Arizona host by Angela and special guest who will be flying in from Hollywood to support Runway.

On a crisp March morning, the crew arrived early at Beachwood Studios in the heart of the bustling Hollywood, California to shoot the cover of Runway. The star of the shoot, Angela walks in shortly after everyone else, dressed comfortably in vintage apparel and ready to work. Angela sits down for an interview with the fashion director before the shoot begins and has the entire team in stitches with her subtle-yet-quirky humor and comical tone that reminds everyone that they’re there to have fun as well as accomplish a common goal.

Working with famed-photographer Gary Lyons Angela never complained once posing almost effortlessly and playing to the camera. It was an effortless transformation from natural beauty to dynamic ingenue, and in a short time, Angela’s posing matched the vibe of the concept and clothing to a tee. The shoot theme intended to revolve round Angela’s newest flick Twilight 2 where she plays an Egyptian vampire aiding in the Cullen’s crisis.

In an exclusive interview with Runway, Angela explained the audition process and her role as Tia in Twilight. Angela goes on to share her favorite designers, fitness secrets, and much more in the interview.

As we continue to expand as a magazine, we are happy to be working with some of Hollywood’s hottest celebrities,” says Runway’s Editor-In-Chief Vincent Mazzotta. The Spring 2012 issue of Runway will also feature a exclusive interviews with playmate of the year Hope Dworaczyk and Spencer Boldman who stars opposite Hollywood heavyweights Jonah Hill, Channing Tatum and Johnny Depp in the film 21 JUMP STREET.

For more information on Runway, please contact: Runway PR division at 800-417-1387 ext 4, email us at pr@runway.net or visit the website: www.runway.net.

Runway, a quarterly international fashion magazine, is committed to providing its readers with the highest form of fashion expression. Through the use of multiple platforms, including: print, digital, social media, mobile, and emerging technologies-Runway strives to deliver advanced fashion coverage to its readers while remaining at the forefront of cutting-edge trends. Runway’s goal is to be “all things fashion, beauty and entertainment” to women around the globe. For more information on Runway please visit: www.runwaylive.com.