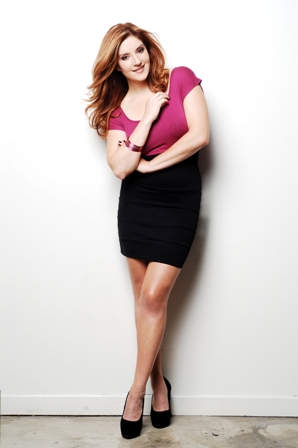 Best known for playing the comedic sidekick, Chelsea Daniels for six years on the Disney mega-hit and Emmy winning show, “That’s So Raven,” Anneliese van der Pol is breaking out of her tween image and into a sexier comedic actress with her new role as “Jennifer,” in the 20th CENTURY FOX/NEW REGENCY spoof comedy “VAMPIRES SUCK.” Fans are excited to see her on the big screen and in yet another comedic role. You are guaranteed to get some great laughs after watching her do what she does best spoofing Anna Kendrick’s “TWILIGHT SAGA” character Jessica.

Anneliese has paved the way for success from the beginning of her career as the youngest actress in US theatrical history to play the role of “Evita” in a professional production. She then went on to make her Broadway debut as Belle in “Beauty and the Beast,” being the 17th and, to date, final Belle. Her talent has kept her busy with constant productions, and given her the opportunity to work with huge stars like Grammy-winning artist India Arie, Jake Gyllenhaal, Ben Stiller, Christina Applegate, Debra Messing, and Greg Kinnear.

We sat down with Anneliese to get the scoop on her new film “VAMPIRES SUCK,” changes in her career, and what else… fashion!

Tell us about your role in “Vampires Suck.”
I play a character named Jennifer, portrayed in the original Twilight series by Anna Kendrick. This film is a very topical spoof so you will recognize a lot of the characters in it from recent films like “DEAR JOHN”, and of course “TWILIGHT.” The script is hilarious and I have some ridiculously funny lines. The movie stars a great cast, they were all amazing, and I had a blast making this film!

What was it like shooting a spoof for the biggest movie in teen history?
I know right? The popularity of the saga is stratospheric. It made us a little nervous while shooting to be making fun of such a well-loved series but I think everyone will find the humour in it.

Are you a fan of the Twilight movies and/or series?
I’m not a huge fan and I haven’t read the books but I do recognize their appeal. I think every girl longs for a gripping romance and I think Twilight is an engaging love story. It combines all that teen angst, true love and emotional drama and blends it with fantasy and that always makes for a rich and exciting movie. What girl doesn’t like a chick flick??

What’s changed with you since you were on THAT’S SO RAVEN on Disney?
I’ve been able to pursue an old love of mine since Raven closed…the theatre. I starred on Broadway and work shopped some new plays and musicals. I’ve been singing more and building up a strong repertoire. I’ve had a lot of time to relax and read scripts and think about what’s coming next in my career, which has been lovely.

Tell us about your love for fashion. Who are your favorite designers and why?
I do, I love fashion. Ever since the first grade when I refused to go to school in anything but my best party dress and the shiniest Mary Janes I knew the fashion bug had found me. I adore dressing up. The more glam the better! My wardrobe favourites at the moment are ultra high nude heels, my boyfriend jacket and Katherine Hepburn style slacks. Marc Jacobs and Michael Kors are the standbys for me when it comes to clothes. Their clothes are affordable and have style, femininity and that touch of luxury all rolled into one. I feel I can wear their clothes everyday and I always feel fabulous in them.

Spanx, a fashion do or don’t?
Spanx??? I have yet to try them. When I’m not feeling at my physical best I go old school and wear black on black on black. Sometimes I where control top tights. Does that count?

Who in Hollywood is a fashion icon in your opinion?
Fashion icons of mine include the Olsen twins. They’ve figured out a nice balance of edginess, class and vintage. They are brave and bold in their fashion choices and I think it pays off. I also think Kate Moss, Chloe Sevigny, and Cate Blanchett never miss. I know it’s cliché and I know she’s not a real person but Carrie Bradshaw’s wardrobe is the ultimate. If Patricia Field could dress me everyday I would be in heaven. If she’d like to live in my closet, I would allow her to.