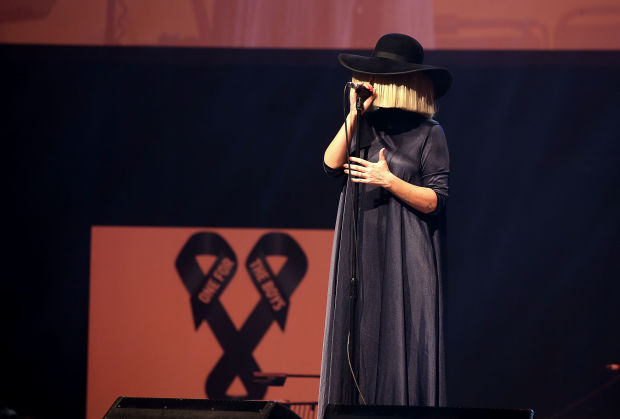 Sia on stage. Photo: One for the Boys
VIA GOOGLE NEWS: FASHIONISTA – AFSUN QURESHI

Sia, Stanley Tucci, Alice Cooper, Haley Joel Osment and Luke Wilson were among those who came out Friday night in support of men’s cancer awareness.

“Help me out a bit guys… I am really struggling here,” Sia beseeched the crowd assembled at London’s Roundhouse on Friday night. “I am a little jetlagged and forgot the words.” The audience promptly accommodated the Australian singer, chanting the lyrics to her monster hit, “Elastic Heart,” and soon, everything was back on track. The singer’s blip could be forgiven — she had just flown in to perform at Samuel L. Jackson’s charity ball, One for the Boys, a men’s cancer awareness fundraiser and fashion show now in its second year. It was also timed to be the opening night party for London Collections: Men (LC:M).

Despite LC:M’s hectic schedule, Jackson snared big names to attend, such as LC:M Chairman and GQ UK editor Dylan Jones and ambassador David Gandy. They joined a high octane line-up of models who took to the stage in a riotous show, including co-host Stanley Tucci, Alice Cooper, Haley Joel Osment, Luke Wilson, Aidan Quinn and Richard Roundtree (the original “Shaft” — and himself a survivor of breast cancer). The men strutted and danced in looks from the likes of Tom Ford, Gucci, Hackett, Burberry and more – could this have been the fun-est fashion show ever? Lewis Hamilton also pitched in, and for once, didn’t have a supermodel hanging off him — just a really amazing snakeskin suit,

The charity, whose catch phrase is “love the glove,” is focused on early diagnosis and not being “a wimp” about seeing a doctor. But Jackson was also keen to support London fashion, telling us how much he admired London style: “It’s so cool that men here are just so confident and self-assured about the way they dress – they have an incomparable style about them but it’s the attitude and confidence that accompanies their incredible way of dressing that makes British men well legendary in the style stakes.”

John Newman also performed a set, as did “American Idol” winner Adam Lambert who, rocking a werewolf hairstyle, delivered a memorable vocal performance. The party then moved on to a more intimate gathering at the Rosewood Hotel. On deck was Mark Ronson, and naturally that meant the dancing went on to the wee hours. Tucci (along with his wife, Felicity, Emily Blunt’s lookalike sister) was also in an affable mood: “I guess we were all pretty nervous backstage, but at the end it just turned out to be a lot of fun. We are just hoping that we can continue to spread the message throughout LC:M.”

But it was the main man Jackson who had the final word: “We are trying to go really big with this message about early diagnosis and warning signs. Our next aim is to have Prince Harry join the charity – why not? We’ll see about that, but nothing like living large when it comes to trying to beat cancer.”