Home ENTERTAINMENT A LOVE SCENE BETWEEN ARYA AND SANSA? 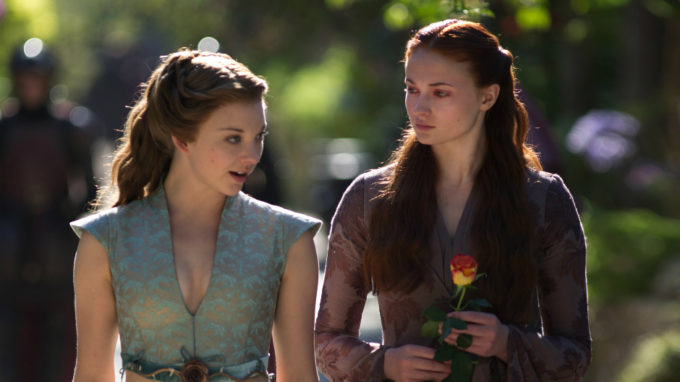 For Sansa Stark to play the role of a lesbian character in Game of Thrones Season 6 sounds a little odd, but this is what the lead star Sophie Turner wants for Sansa. Believe it or not, the actress wants her character to have intimacy with none other than Natalie Dormer’s Tyrion Lannister.

In the HBO TV series adaptation and the books of George R.R. Martin’s epic fantasy saga, fans have seen that the story does follow strange romances among the lead characters. The scandalous incestuous affair between Cersei (Lena Headey) and her brother Jaime Lannister (Nikolaj Coster-Waldau) has always remained the talk of the show, but it looks like the fans will get to see their favorite character turning into a lesbian.

Till this date, Sansa has been physically and emotionally molested by different men. In Season 1, she had to face the wrath of Joffrey Baratheon Tyrion Lannister). After that, she was married to Tyrion Lannister (Peter Dinklage) for a brief period; he did not harm her, but living with him was not easy for her. When she thought that things would be easier for her after the murder of Joffrey, she found herself with Petyr Baelish, aka Littlefinger, (Aidan Gillen), who in turn handed her over to Ramsay Bolton (Iwan Rheon), who sexually abused her many times.

In an earlier interview with Time, Turner revealed the rape scene was the hardest scene she has ever filmed.

“To have to do a really intense scene, like the rape scene last season, we couldn’t really sleep beforehand, Iwan and I. During the day, it was a bit awkward. But afterwards you just go to Safe Haven, which is the hotel bar, and sort yourselves out.”

Based on her history with men, it looks like Turner wants Sansa to have a moment of peace. In an interview with Entertainment Weekly, Turner stated that, since her character has suffered at the hands of different men over the course of the series, she thinks that Sansa’s ideal partner should be a woman.

“In the Game of Thrones universe, I think she’s going to have to swing the other way – because the men thing isn’t working for her. Judging by Sansa’s relationship with Margaery … probably Margaery.”

An affair between Sansa and Margaery would surely turn the events to a new direction, and Turner is quite open to experiment with her character. She further revealed that her younger sister on the show, Arya Stark (Maisie Williams) can also serve a good sexual partner for her character.

“I’d love a love scene between Arya and Sansa.”

If Sansa was abused by different men, then Margaery’s case is not at all different. Ever since her debut in the show, she has been seen serving many men. First, she was married to Joffrey, who treated her badly and then after his death, she was married to his younger brother Tommen Baratheon (Dean-Charles Chapman), who loves her but has no sense of ruling a kingdom.

So, pairing Margaery with Sansa can be a nice move by the series creators. However, Margaery may think twice before thinking of having a lesbian relationship, especially because of her ongoing argument with the High Sparrow (Jonathan Pryce) to save her brother, who has been depicted as a homosexual from the very beginning.

Game of Thrones Season 6 Episode 6, entitled “Blood of My Blood,” aired earlier today. Do not forget to check episode recap. The new episode “The Broken Man” will air on June 5, and now fans will be waiting to see how Sophie Turner’s character will turn into a lesbian or if she ever finds an inclination towards Margaery or some other important female character.