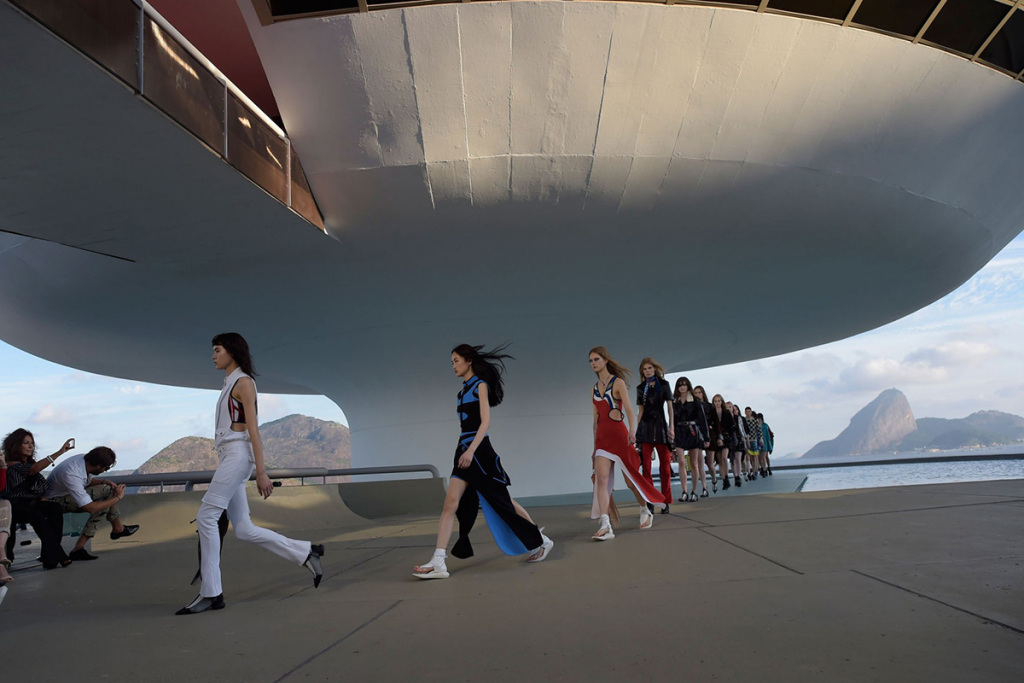 Brazil is a land fighting an epidemic (Zika), experiencing a maybe/maybe-not presidential impeachment and economic malaise, and it is under pressure for its handling of the upcoming Summer Olympics. Is it really the place for a no-holds-barred haute European fashion show, as Vuitton held last weekend in the shadow of the Oscar Niemeyer-designed Niterói Contemporary Art Museum?

Vuitton said yes, becoming the first European brand to bring its catwalk to the country. And it arrived with its eyes open and its arguments mustered.

Brazil is among Vuitton’s 10 biggest markets, on the same scale as France, Germany and Russia. Vuitton has had a bricks-and-mortar presence in the country since 1989. “We have been investing in Brazil for the long-term,” said Michael Burke, its chief executive, who added that Rio was far away from the site of the Zika outbreak. “We are not going to drop everything and run at the first sign of crisis.”

Still, conceded the brand’s artistic director Nicolas Ghesquière, its executives had discussed the possibility of moving the show. But when things are bad, he said, is exactly when you want to show your support. And for a fashion brand, the biggest, loudest way to do that is to have a show that is live-streamed around the world, employs a few thousand local workers for two weeks, and entertains approximately 500 guests, including 300 clients from about 25 countries, about half of whom the house brought over (the rest were either local residents, or flew in on their own planes).

There were also celebrities like Alicia Vikander, Catherine Deneuve, Jaden Smith and Zendaya. And they were treated not just to the show but to a helicopter ride, stand-up paddle-boarding and a tour of local modernist architecture, among other expeditions (because when you are asking people to travel so far, you have to throw in some more sweeteners). Vuitton is also underwriting four exhibitions coming to the Niterói, so in some ways the 20 minutes of runway styles was just the beginning.

And as far as those 20 minutes went, they were a streamlined and uncompromising river of bright colors and sporty references (scuba, soccer, sailing), body-conscious cutaways, ruffles and leather. There were dresses cut short at the front and swirling long tails at the back; paper-thin leather tunics over skinny moto trousers; graphic layers of contemporary art references and L.K.D.s — little khaki dresses — sliced and diced like a less sparkly version of the Vuitton frock Taylor Swift wore to the Met Gala. The rib cage and the upper abs were the featured erogenous zone.

“It is tropical and urban at the same time,” Mr. Ghesquière said by telephone before the show. “I had to pay tribute to the country we are in, but also bring some of Paris with me.”

In this, Mr. Ghesquière’s third Resort offering was a natural extension of recent runway shows that have happily moved Vuitton away from the designer’s original strategy of “wardrobing” — a fancy word for the kind of basics that form the skeleton of a wardrobe — and into the realm of real fashion: riskier, but also potentially more desirable.

This was certainly true of the kaleidoscopic deconstructed surfer dresses, though it’s hard to imagine there are many women out there who want a print of soccer players kicking away on their cocktail dresses, though I could be wrong.

I wasn’t, admittedly, there, but watching the livestream on my computer. Thus I did not feel the embrace of the local population that some attendees’ reports indicated. But maybe my viewing arrangement provided some (literal) long-range perspective.

When Mr. Ghesquière noted that the museum was across the road from a favela, and the people who lived in the slum would be able to see the show from a stairway and their balconies, it was hard not to grimace. After all, they were not among the invitees, and they would not be able to buy what they saw.

“But they can dream about it,” Mr. Burke argued. “We give them that dream. And one day they will be able to buy it.”

In the end, it’s that measure that has proved these sorts of risks are worth the effort. According to Mr. Burke, the main “fashion week has become so intense, it is virtually impossible to hear yourself think. It’s a circus. These Cruise shows hark back to the ’50s and 60s world of couture, when clients began a relationship with a designer that could last a lifetime.”

He said most of the clients the house brings to Cruise shows immediately order pieces from the collection. So Vuitton not only knows what pieces will be most popular, but the clients also act as “influencers” once they go back home, each reaching 50 to 100 friends/potential clients who might go into a Vuitton store and order, too.

All of which means the inflation of the Cruise season is not going to end any time soon. Indeed, Mr. Ghesquière said as much, noting that after last year’s Cruise show in Palm Springs, Calif., at the modernist Bob and Dolores Hope estate, he realized the engine of his Cruise shows could be powered by “traveling for architecture.” To that end, Asia is still wide open — “we’ve never done a show in Asia,” he noted. And pressure is on for each show to be more spectacular and memorable than the last, in a more memorable venue, adding to the potential for still more controversies.

To wit, this week, Gucci is to hold its Cruise show in the cloisters of Westminster Abbey in London, the resting place of Geoffrey Chaucer, Isaac Newton and Lewis Carroll, among others, as well as the site of royal coronations and weddings. Though the show is not taking place in the church itself (which is not available for events), the Rev. Peter Owen-Jones, the vicar of Firle, Glynde and Beddingham, West Sussex, recently told The Telegraph newspaper that allowing a fashion brand into the building was like “selling our soul for a pair of trousers.”