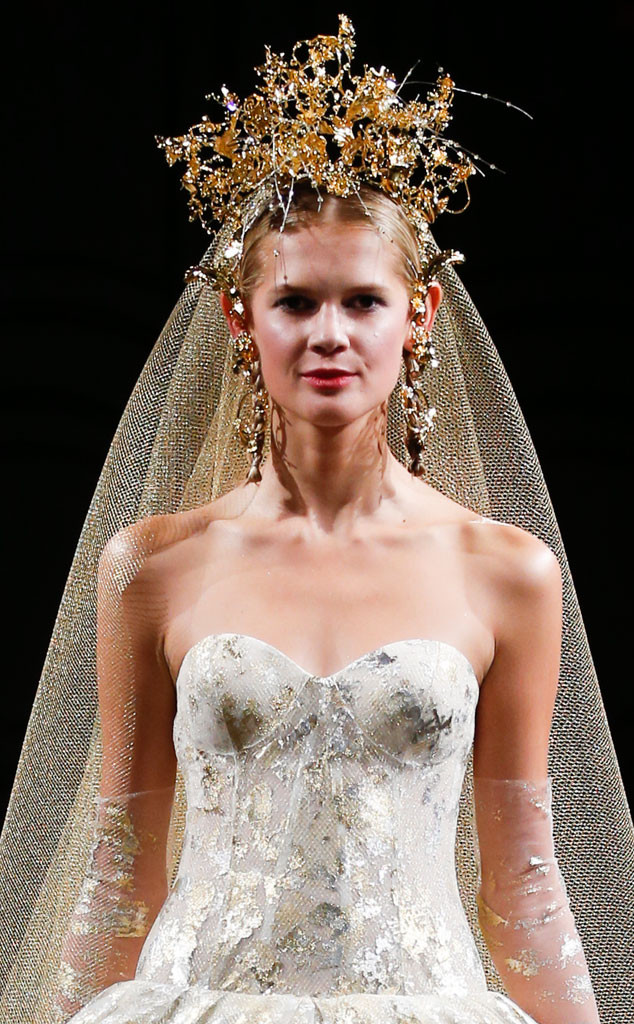 Amsale
The designer’s signature eponymous line delivered, with impeccable tailoring, minimal embellishment and maximum style. This year, flourishes of corded lace gave the collection a stunning freshness. Earlier this week, I stopped by Amsale’s studio for a chat and an early look at the new collection. Her inspiration: The street style of NYC.

Reem Acra
Bedazzled headphones, anyone? Leave it to Reem Acra, known for her sensual, glamorous gowns, to ice out more than a dozen sets for her models to rock on the runway. As for the dresses, it was subtle sparkle from head to toe, with hints of crystal and embroidery on many of the looks. Illusion prevailed throughout the collection, adding a sexy edge that brides are going to be all over next year.

Monique Lhuillier
Want pretty and feminine? Monique Lhuillier is your girl. This year’s collection offered 3-D flowers, lots of illusion and overskirts that brides can shed after the ceremony to reveal a more dance-friendly, body-conscious look underneath. Who doesn’t want two outfits in one?

Naeem Khan
When Naeem Khan debuted his first bridal collection in 2013, he irrevocably changed the industry, generating more buzz and excitement than anyone I can remember. Since then, he has consistently wowed with theatrical productions, couture-level embroidery and over-the-top styling. Case in point: This season’s sultry, Spanish-influenced beaded gowns. They were the grand finale to a fabulous day.