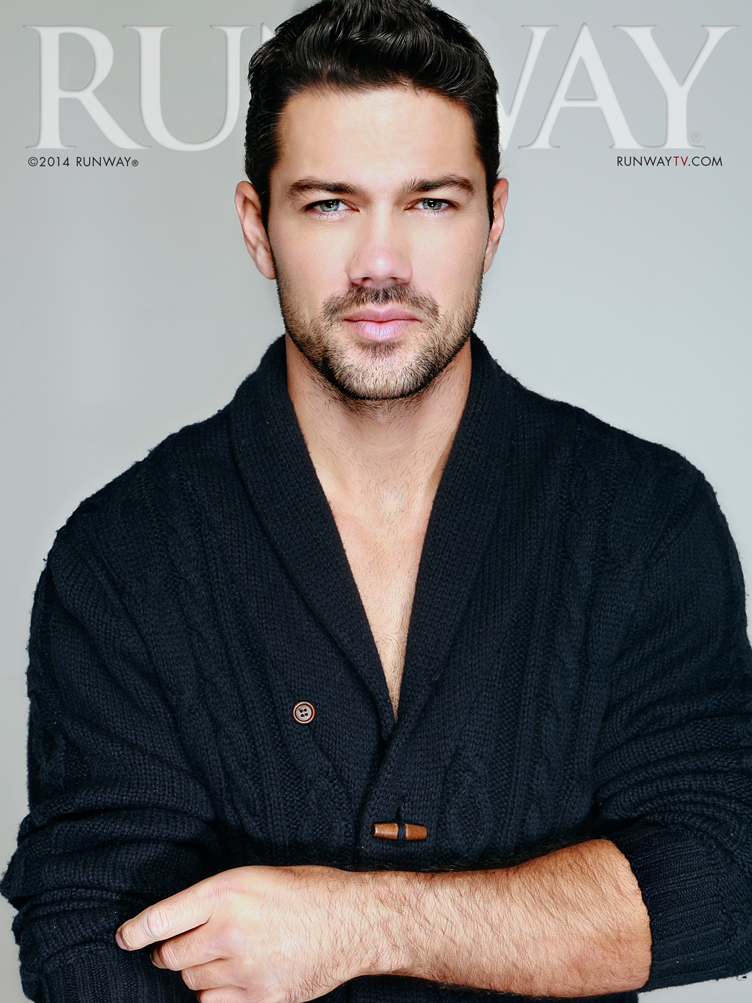 What is your favorite dish to cook? And what ingredients do you favor the most?

Being known for your modeling, what do you think is your most widely recognized feature by your fans? And do you agree?

I would have to say my most widely recognized feature would be my eyes. And yes, I agree, I suppose. I have a hard time complimenting myself, but since they are my mother’s eyes I suppose it’s easier to be happy with them when I think of them in that way.

Most adults that like soap operas got hooked on them as kids because one parent or relative watched them when they were around. Did you ever imagine when you were younger you would end up playing a character on one of the most popular soaps?

I never thought I’d end up in Hollywood at all, truthfully. I had a lot of friends growing up that would say I’d end up on a soap opera someday, and my response would always be that if you could get a regular gig in Hollywood, that wouldn’t be all that bad. Now having one, I’m pleased to find I was right. But for it to be General Hospital… well, that’s even better. To have been welcomed into such a long-standing powerhouse of a show was an honor, and is gratifying.

You seem to have this effervescent way about you. What has influenced you most and what is your philosophy on life?

Everything helped form my philosophy on life, my way of thinking and acting. You learn something from every new person you meet, every conversation you have that you’ve never had before, every place you visit for the first time, every dish you eat for the first time. Be open to experiences, they are everywhere.

How have you selected the roles you have played so far? And what is your process for choosing roles you may play in the future?

So far, I would say that the selection of the jobs on my resume is based on adventure and enjoyment; identifying characters I either think I’m very similar to in real life, or characters that sound fun to portray. I always chase a challenge, because it is the challenge that makes it all satisfying. That being said, you still have to get the job, haha. In the future, as I improve and continue to work, I don’t expect the selection criteria to change all that much, hopefully just the booking ratio.

Who is your favorite director that you would like to work with on a future project?

James Cameron. I have a vivid imagination, and would love work with one who has so many fantasy titles on their resume. A film like Avatar seems like such an adventure to make, and anyone who knows me knows my infatuation with adventure.

Your look is very exotic for an actor and model, do you have a favorite exotic travel destination you would love to visit?

I’m an adventure junkie, and I have a really hard time with the word ‘favorite’ when it comes to travel. If you can apply the word ‘exotic’ to a location, I’m sure I’d love to go there. I’ve been really wanting to explore the Greek isles for a long time now, and all over New Zealand, and backpack Thailand. There are too many to list for a question that wanted one answer. Just know that I love travel, I love adventure, and it’s unlikely that I’d say no to travel.

Do you consider yourself an expert gamer when it comes to video games? What is your go to favorite when you have time to play?

I’d consider myself an avid and proficient gamer. I’ve been playing them since I was a kid, and don’t think I’m ever going to “grow out of them”, as I’m often asked. As for a favorite, that’s tough. Games these days have evolved into such sophisticated storytelling machines. The type of game I want to play is entirely dependent upon my mood. Some games are sources of catharsis; you just run around and wreck things. Some games tell compelling and emotional stories, and can be quite long… so when I’m in the mood for a richer fiction, and some storytelling, I play those. Titles I’ve been spending time with lately would be ‘Beyond: Two Souls’ and ‘Skyrim’.

Horror or Romance? Do you have a favorite film genre?

Love a good horror film, but again, the genre of film I watch is usually contingent upon the mood I’m in. If I’m feeling depressed, comedy is probably a good remedy. I’m a huge believer in storytelling as a source of therapy, beyond just escapism. You can borrow the emotional climate of a good story.

As it relates to both your professional and personal life, where do you see yourself in five years? What goals or dreams do you still hope to achieve?

In five years, I’d like to imagine my career as a further evolved version of its current self. I enjoy doing what I do for a living; for all the bad things that can be said about acting in Hollywood, I find the combination of creativity, required command of your emotions, the personal insight that comes with and all the adventure of storytelling to be very satisfying. In 5 years I hope I’m still doing it. As for personal goals, I’d like to take strides towards planting some roots and starting a family.

You’ve worked on music video sets as well. How does that differ from what you do on your regular set and what is the most enjoyable part of filming a music video?

While I wouldn’t consider music videos to be a huge part of my professional experience, I’ve done enough of them to say the biggest difference is definitely dialogue. I don’t know that I’ve ever been asked to speak more than a few words in a music video, since the focus of a music video is on the recording artist, their performance, and their song. We are all there to support them in telling their story, or whatever story they are trying to tell. In contrast, playing a character on an episodic television show or in a film requires just that: a character. You talk, a lot. You have feelings. The focus has now shifted to you, your thoughts and feelings, your actions and relationships, the sound of your voice.

If you could be an undercover spy, who would you disguise yourself as and what would be your mission impossible to complete?

I can’t tell you who I would be as an undercover spy, because it’d blow my cover, and I’d have to kill you. You have been warned.