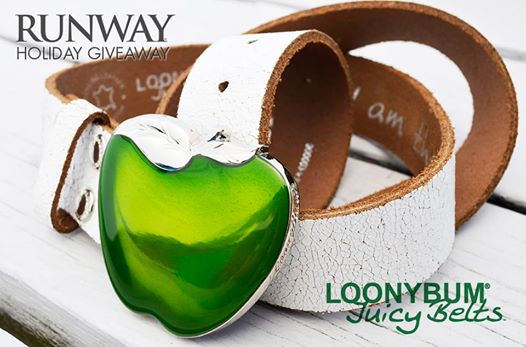 Simply download the free RUNWAY US app at the Apple App Store or on Google Play and you will automatically be entered to win a pair of AXIIS Eyewear or a LoonyBum belt. A winner will be chosen every day! Santa only comes once a year, so surely we’ve become your new favorite fashion gift giver this season. And while we’re on the topic of your newfound affection for us, don’t forget to ‘Like’ Runway on Facebook to secure your entry! All are welcome to enter.

The sweepstakes will run December 18, 2013 – January 9, 2014 with a winner chosen every day! Make sure to “Like” our cover star Jennette McCurdy on Facebook also, as she will be helping us out with the contest along the way. You will find all the rules below. Happy Holidays from Runway!

All Rules are in compliance with US Law.

NO PURCHASE OR PAYMENT OF ANY KIND IS NECESSARY TO ENTER OR WIN THIS SWEEPSTAKES. A PURCHASE WILL NOT IMPROVE CHANCES OF WINNING.

You have not yet won.

By entering this Promotion, entrants accept and agree to be bound by these Official Rules. Any violation of these rules may, at Sponsor’s discretion, result in disqualification. All decisions of the judges regarding this Promotion are final and binding in all respects.

2. ELIGIBILITY. This sweepstakes (the “Promotion”) is only open to legal residents of the 50 United States and District of Columbia who are at least 13 years old as of the date of entry, except officers, directors, members, and employees of the Sponsor, the judging organization (if applicable), or any other party associated with the development or administration of this Promotion, and the immediate family (i.e., parents, children, siblings, spouse), and persons residing in the same household, as such individuals. This Promotion is void outside the 50 United States and the District of Columbia, and where prohibited.

3. HOW TO ENTER. Download a copy of Runway Teen off the free RUNWAY US app on iTunes or Google Play, find the contest page in the issue and enter the code on thewww.Facebook.com/RunwayTeen page as a comment to any article during the Promotion Period and remember to like the pages @runway and @runwayteen for a double entry opportunity. All entries become the property of the Sponsor and will not be acknowledged or returned. Limit: One entry per person and one entry per e-mail address during the Promotion Period. All entrant information, including e-mail addresses, is subject to the respective Privacy Policy of the applicable Sponsor.

4. WINNER SELECTION AND NOTIFICATION. Winner selection will be conducted by random drawing from all eligible entries on or about January 25, 2014 (the “Drawing Date”). Any potential winner will be notified by mail, email and/or telephone. If a potential winner: (i) cannot be contacted; (ii) does not respond within five (5) days from the date the Sponsor first tries to notify him/her; (iii) fails to return the Affidavit and Release as specified in Rule 9; (iv) refuses the prize; and/or (v) the prize or prize notification is returned as undeliverable, such potential winner forfeits all rights to win the Promotion or receive the prize, and an alternate potential winner may be selected. Upon contacting a potential winner and determining that he/she has met all eligibility requirements of the Promotion, including without limitation the execution of required waivers, publicity and liability releases and disclaimers, and, at Sponsor’s discretion, successful completion of a background check, such individual will be declared the “winner” of the Promotion.

5. PRIZE DESCRIPTION. There will be 100 prizes. Loony Bum belts, Axiis Sunglasses and RUNWAY shirts. The approximate retail value of the prizes is $50 to $300 each.

6. TAXES. All federal, state and/or local income and other taxes, if any, are the winner’s sole responsibility.

7. ODDS OF WINNING. The odds of winning this Promotion depend on the number of eligible entries received.

8. NO PRIZE TRANSFER OR SUBSTITUTION. No prize or any portion thereof is transferable or redeemable for cash. Any portion of the prize that is not used is forfeited. No substitutions for prize except by Sponsor, in which case a prize of equal or greater value will be substituted.

9. CONSENT AND RELEASE. By entering the Promotion, each entrant releases and discharges the Sponsor, judging organization (if applicable), and any other party associated with the development or administration of this Promotion, their parent, subsidiary, and affiliated entities, and each of their respective officers, directors, members, shareholders, employees, independent contractors, agents, representatives, successors and assigns (collectively, “Sponsor Entities”), from any and all liability whatsoever in connection with this Promotion, including without limitation legal claims, costs, injuries, losses or damages, demands or actions of any kind (including without limitation personal injuries, death, damage to, loss or destruction or property, rights of publicity or privacy, defamation, or portrayal in a false light) (collectively, “Claims”). Except where prohibited: (i) entry into the Promotion constitutes the consent of the entrant, without further compensation, to use his/her name, likeness, biographical data, and contact information for editorial, advertising, marketing, publicity, and administrative purposes by the Sponsor and/or others authorized by the Sponsor; (ii) acceptance of a prize constitutes a release by any winner of the Sponsor Entities of any and all Claims in connection with the administration of this Promotion and the use, misuse, or possession of any prize; (iii) any potential winner may be required to sign an affidavit of eligibility (including social security number) and a liability/publicity release; and (iv) if prize involves travel or activities, any potential winner and travel companion (if applicable) may be required to execute releases of the Sponsor from any and all liability with respect to participation in such travel/activities and/or use of the prize. Affidavits and releases must be returned within five (5) days from the date that Sponsor first tries to notify the potential winner. Sponsor may conduct a background check to confirm any potential winner’s eligibility and compliance with these rules. By entering, you agree to cooperate reasonably with any such background check. If the prize includes participation in any public event(s) or publicity, or if Sponsor Entities intend to publicize the winner in any way, and if a background check reveals that a potential winner has engaged in conduct that could damage the reputation or business of any Sponsor Entity, as determined by Sponsor in its discretion, the potential winner may be disqualified and the prize may be awarded to an alternate winner. If winner is deemed to be a minor under the jurisdiction of his/her residence, the prize will be awarded in the name of his/her parent or legal guardian who must execute the necessary affidavit and release and, if applicable, must accompany winner on the trip (no additional travel expenses will be awarded should a parent or legal guardian be required to accompany the winner on the trip).

10. DISCLAIMERS. (i) Sponsor not responsible for entries that are lost, late, misdirected, incorrect, garbled, or incompletely received, for any reason, including by reason of hardware, software, browser, or network failure, malfunction, congestion, or incompatibility at Sponsor’s servers or elsewhere. In the event of a dispute, entries will be deemed submitted by the authorized account holder of the e-mail address submitted at the time of entry. “Authorized account holder” is defined as the natural person who is assigned to an e-mail address by an Internet Access Provider, online service provider, or other organization (e.g., business, educational institute) that is responsible for assigning e-mail addresses for the domain associated with the submitted e-mail address. (ii) Sponsor, in its sole discretion, reserves the right to disqualify any person tampering with the entry process or the operation of the web site or otherwise attempting to undermine the legitimate operation of the Promotion. Use of bots or other automated process to enter is prohibited and may result in disqualification at the sole discretion of Sponsor. (iii) Sponsor further reserves the right to cancel, terminate or modify the Promotion if it is not capable of completion as planned, including by reason of infection by computer virus, bugs, tampering, unauthorized intervention, force majeure or technical failures of any sort. (iv) Sponsor Entities are not responsible for errors in the administration or fulfillment of this Promotion, including without limitation mechanical, human, printing, distribution or production errors, and may cancel, terminate or modify this Promotion based upon such error at its sole discretion without liability. In no event will Sponsor be responsible for awarding more than the number of prizes specified in these rules. (v) In the event this Promotion is cancelled or terminated, pursuant to subparagraph (iii) or (iv), Sponsor, in its sole discretion, may elect to hold a random drawing from among all eligible entries received up to the date of discontinuance for any or all of the prizes offered herein. (vi) SPONSOR ENTITIES MAKE NO WARRANTIES, REPRESENTATIONS OR GUARANTEES, EXPRESS OR IMPLIED, IN FACT OR IN LAW, AS REGARDS THIS PROMOTION OR THE MERCHANTABILITY, QUALITY OR FITNESS FOR A PARTICULAR PURPOSE REGARDING ANY PRIZE OR ANY COMPONENT OF ANY PRIZE. (vii) CAUTION: ANY ATTEMPT BY AN ENTRANT TO DELIBERATELY DAMAGE THE WEBSITE OR UNDERMINE THE LEGITIMATE OPERATION OF THIS PROMOTION MAY BE A VIOLATION OF CRIMINAL AND/OR CIVIL LAWS, AND SHOULD SUCH AN ATTEMPT BE MADE, SPONSOR RESERVES THE RIGHT TO SEEK REMEDIES AND DAMAGES (INCLUDING WITHOUT LIMITATION ATTORNEYS’ FEES) FROM ANY SUCH ENTRANT TO THE FULLEST EXTENT OF THE LAW, INCLUDING CRIMINAL PROSECUTION. (viii) The value(s) of the prize(s) set forth above represent Sponsor’s good faith determination of the approximate retail value(s) thereof; the actual fair market value(s) as ultimately determined by Sponsor are final and binding and cannot be challenged or appealed. In the event the stated approximate retail value(s) of a prize is more than the actual fair market value of that prize, the difference will not be awarded in cash or otherwise. No substitution or compensation will be given for any portion of the prize that is not used.

11. APPLICABLE LAWS AND JURISDICTION. This Promotion is subject to all applicable federal, state, and local laws and regulations. Issues concerning the construction, validity, interpretation and enforceability of these Official Rules shall be governed by the laws of the State of New York, without regard to any principles of conflict of laws. All disputes arising out of or connected with this Promotion will be resolved individually, and without resort to class action, exclusively by a state or federal court located in New York, New York. Should there be a conflict between the laws of the State of New York and any other laws, the conflict will be resolved in favor of the laws of the State of New York. To the extent permitted by applicable law, all judgments or awards shall be limited to actual out-of-pocket damages (excluding attorneys’ fees) associated with participation in this Promotion and shall not include any indirect, punitive, incidental and/or consequential damages.

12. WINNER LIST. For a list containing the names of the winners, send a self-addressed stamped envelope, within six (6) months of the Drawing Date, to: Winner List, Runway Teen Attn: Shey to 4413 N. Saddlebag Trail #1, Scottsdale Arizona 85251

14. Facebook is not responsible for this sweepstakes it is solely run by Runway Beauty, Inc. this promotion is in no way sponsored, endorsed or administered by, or associated with, Facebook.