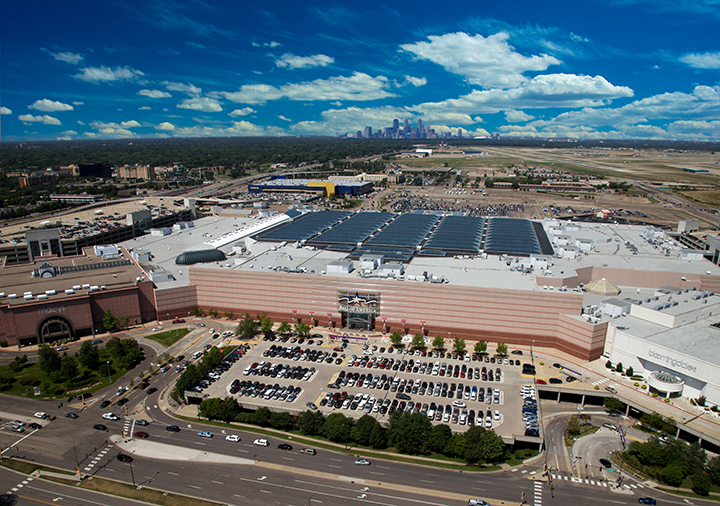 With over 4.2 million square feet – it can house 7 Yankee Stadiums – and since opening its doors in 1992, this mall boasts the nation’s largest indoor amusement Park located amidst roughly 520 stores and 50 restaurants. There is also a Nickelodeon Universe and Sea Life Aquarium. “Mall of America is a destination and experience,” says Dan Jasper, VP of Public Relations. Indeed, MOA, as it is known, entertains its guests with musical acts to celebrity book signings to fashion shows. Luxury brands such as Nordstrom, Burberry, and Michael Kors are housed within mid-level and value-friendly stores, though strategically clustered for the convenience of their 42 million annual visitors. “We are unique because our biggest draws are often our attractions, but many of our retailers are destination draws in and of themselves including American Girl, Apple, Lego, and more.” First conceptualized as bringing together shoppers of all income brackets, Jasper says, “Beyond that, it was important for MOA to become a destination for visitors from around the world and the mall has been very successful in accomplishing that goal by offering a unique blend of shopping, dining, and attractions.”

With such a variety under one roof, which has been described as a city within a city, Jasper offers some navigational tips. “Plan ahead and wear comfortable shoes. You can always tell a first-time visitor to MOA because they are looking all around with wide open eyes and mouth. We offer great maps and directories, friendly customer service representatives, and we also have a mobile-phone version of our website. The wonderful thing about Mall of America is that we offer so many options, that shoppers of all levels are going to find items that are of value to them.”

Billed as the largest and most fashionable shopping destination in the southern hemisphere, Chadstone The Fashion Capital is home to 530 stores including luxury brands such as Chanel, Coach, Burberry, Salvatore Ferragamo, Louis Vuitton, Jimmy Choo and others, yet Target and Woolworths are some major anchor stores who rub shoulders with prominent Australian designers. Chaddy, as it’s locally known, is the oldest in Victoria, opening its many doors in 1960 bringing shoppers the latest in food and lifestyle options. Just a decade before its grand opening, the site was an extensive paddocks area of the Convent of the Good Shepherd on which cattle grazed over the initial 30 acres.

Due to its ever-growing popularity, Chadstone recently announced an expansion of its floor area that will add an international flair with designer boutique stores such as Dior, Escada, Zara, and Topshop showing interest in joining the mall. The parking area which accommodates 9500 cars currently will be increased by an extra 1300 spaces. Enticing foreign customers even more, Chadstone offers discounts of up to 30 percent from over 200 of their favorite stores. Also, when finished with your shopping experience, Chadstone offers entertainment for everyone: 16 movie theaters, AMF Bowl, plus great cafes and bars.

Since opening in 1964, Yorkdale has become one of the largest shopping malls in Canada, housing over 250 stores and enjoying the highest sales-per-square-foot of any Canadian mall. “Our merchant mix offers something for everyone no matter your budget,” says Anthony Casalanguida, General Manager of Yorkdale Shopping Centre. “From investment pieces to fast fashion, Yorkdale has a combination of stores to cater to fashion’s number one rule: Mix high end investment with of-the-moment trend pieces.”

Due to the diversity of venues – from Tory Burch to Top Shop to Tiffany’s, Coach to Cartier and J. Crew – the center draws approximately 400,000 customers every week to its stores and dining spots. Because of its overwhelming success, Yorkdale is undergoing an expansion this year that will feature 145,000 square feet of additional retail space. “This translates to about 40 new stores, many of them will be brand names that are firsts to Canada,” explains Casalanguida, who anticipates a November 2012 opening for the new addition. “Yorkdale has always been a landmark in Toronto that continues to attract a growing loyal customer base.” Considering the current economic climate, Casalanguida explains, “Our customers are telling us that they still want to shop; all we are doing is listening to them.”

One of the only Toronto shopping malls to offer valet parking, Kaiser said consumers begin their experience in the parking lot. “Download our free mobile App to help you navigate the center. Once you begin shopping, explore our Luxe Lane, featuring luxury retailers such as Holt Renfrew and Burberry. If visiting from overseas, give us a call ahead and we’ll make special arrangements for the visit.” Asked to describe Yorkdale Mall, Casalanguida quickly says, “Inspired Desired Fashion.”

THE SHOPPES AT THE PALAZZO: Las Vegas, Nevada; USA

The retail component of this 450,000 square foot mall is an important element of The Palazzo Resort-Hotel-Casino, a resort in the heart of the famed Las Vegas Strip. Anchored by Barneys New York and featuring more than 60 of the world’s most exclusive luxury products, The Shoppes at The Palazzo features dozens of brands, nearly 20 of them “firsts” to Nevada, such as Chloe, Christian Louboutin, Van Cleef & Arpels, and Diane von Furstenberg, plus one-of-a-kind brands Piaget, Billionaire Italian Couture, and Canali. “The Shoppes at The Palazzo features an array of the world’s top designers on down,” says Janet LaFevre, group marketing manager. “It’s a shoppers’ paradise and a must-see Las Vegas location, so the experience that shoppers are able to enjoy here are one-of-a-kind.” If fashion isn’t your thing, there are other surprises at The Shoppes sure to capture your attention. “At Bauman Rare Books, you can browse precious first-edition volumes dating to the 15th century. Or customize your own tasting with rare wines at Double Helix Wine Bar + Boutique.” This shopping mecca compliments the biggest names in fine dining with an unparalleled roster of celebrity chef restaurants and eateries. “Wolfgang Puck’s CUT, Emeril Lagasse’s Table 10, and more,” says LaFevre on the upscale food options. “And if waking up before noon isn’t your style, The Shoppes is the place to be after dark.” Evening fun sizzles into the wee hours at LAVO nightclub while late-night nibbles at FIRST Food & Bar “brings the authenticity and character of the neighborhood bar and diner back to life.”

“The Shoppes at the Palazzo is a must-see destination, retail paradise, and luxury redefined. Oh, and wear comfortable shoes,” suggests LaFevre.

If you’re looking for a vibrant and colorful shopping experience, visit this 1.5 mile thoroughfare, Europe’s busiest shopping street with over 300 shops that range from the very exclusive to the very inexpensive. Large flagship stores include Primark, one of the street’s most popular shops that has long lines but great prices and variety, while the art-deco building of House of Fraser is always a draw. The immense department store Selfridges has been on Oxford Street for over a century; Topshop brings in the celebrities and fashionistas. Trendy music shops include HMV and the huge Virgin Megastore, while famed bookshop Dillions and Books Etc. are always crowded on weekends. Everyone has the chance to purchase at least one thing on their shopping expedition. Selfridges food hall is extremely popular while other eateries, coffee shops and food street vendors dot this West End Street.

About halfway along Oxford Street is Oxford Circus, a busy intersection with Regent Street. The diagonal crossing opened in 2009 and is the only one of its kind in central London. Common Oxford sites include preachers and political demonstrations. On any given day, the street is closed off to traffic except bus and taxi travel. Sales along Oxford Street occur several times a year and bargain shoppers are out in full force, necessitating mounted police for crowd and traffic control.