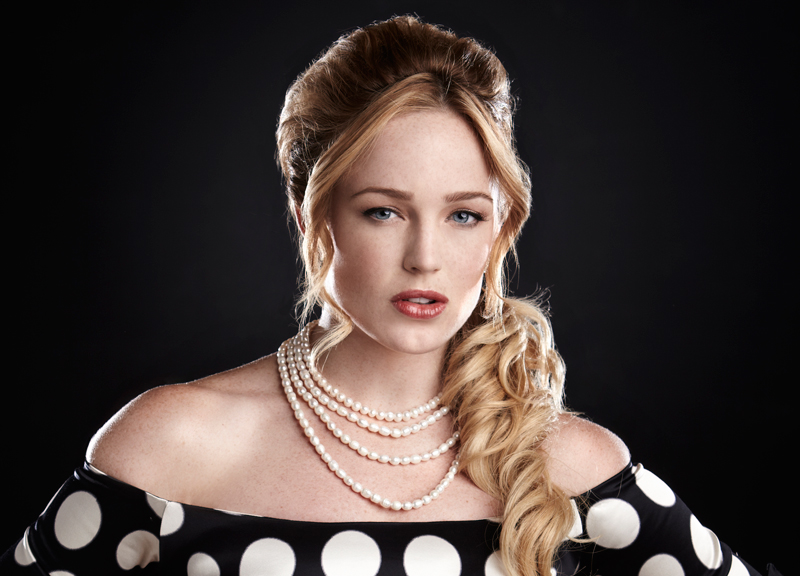 Runway: What initially attracted you to the role of Kirsten on Death Valley?

Caity Lotz: I liked that it would be an opportunity for me to use my martial arts training along with my acting, and the producers said they’d let me do my own stunts. I also grew up watching MTV and was excited to be a part of their scripted movement.

R: We know you already had an interest in martial arts and stunts before you joined the show, but were you interested in horror or science fiction as well?

CL: Science fiction, yes. Horror, no. I don’t like being scared and I have a very active imagination. Every time I watch a horror flick I’m seeing ghosts and checking under my bed for weeks. Even when we were shooting I’d be scared, but I think I’m starting to come around…and with sci-fi, I love to explore the possibilities of our world and that one day we might find out that some of the ideas aren’t so fictitious after all. Plus, who doesn’t wonder about aliens and technology?

R: Aside from an active imagination, what characteristics do you have in common with Kirsten?

CL: We definitely have some similarities, just different degrees of the characteristics, I think. One thing I really like about her is that she never feels bad about her naiveté-she’s not embarrassed, just curious, open and honest.

R: In the areas that are difficult to identify with, how do you stay in character?

CL: The way Kirsten reacts to situations is pretty different than how I would. I always make sure I have clear choices on how she would feel about everything in a scene, so my gut reaction is in tune with her.

R: Was any research or training required of you before filming started?

CL: Luckily I’d had previous training in fight choreography and different martial arts before, so that was there. I did talk to all my local cops, asking them a bunch of questions about what it’s like to be a cop. I also went to a shooting range, so I could see how to hold a gun and how it feels to shoot.

R: Is your personal style similar to your onscreen wardrobe?

CL: I usually don’t roll around in a cop uniform, so that’s a big difference! The belts and tactical vests we have to wear are so heavy and uncomfortable. I have no idea how cops chase after people with that extra 25 pounds on-it’s not the donuts, it’s the gear! And my “civilian” clothes on the show are different from my style because they’re less edgy, more sweet.

R: Who are some of the designers you wear the most or gravitate toward?

CL: I like Anna Sui, Alexander McQueen and anyone who can make comfy, grungy clothes look edgy and fabulous.

R: We like your style! In the future, do you see yourself proceeding in this type of comedy/horror role or are there other genres you’d like to pursue?

CL: I had a great time working on Death Valley, but I usually prefer drama to comedy. It’s always good to mix it up. I also hope to get more opportunities to do more character work, playing roles more outside of myself. A challenge is always fun. Right now I’m filming a thriller called The Pact playing a very dark and troubled young girl-a nice change from my bubbly Death Valley character.

R: We hear you’re a painter, among your other talents. Do you have a certain artistic style or favorite subject?

CL: Everything I paint is more abstract, and I love to do mixed-media stuff. It’s never really been about making something perfect-just another form of expression.