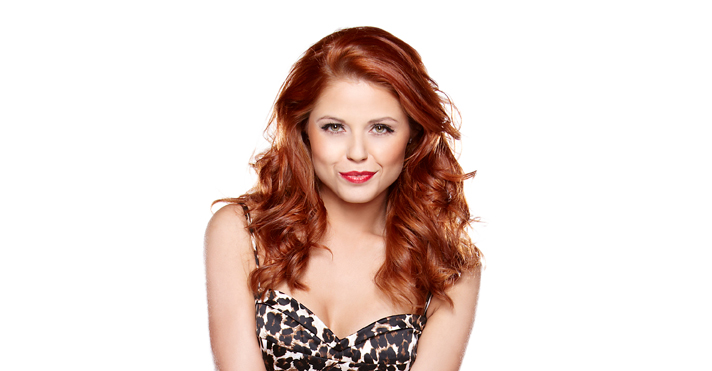 Born in 1980 during a frigid Russian winter, Trebunskaya started dancing when she was just six years old, winning her first title at the age of seven-very fitting, since her parents owned a dance studio. At the age of 17, she moved to the U.S., bringing her knowledge and passion for dance, various cultures and fashion. Now, nearly 15 years later, Trebunskaya is known as a Russian professional ballroom and Latin dancer, as well as a teacher. She works out six days a week doing Pilates, ballet and yoga, and has made a name for herself in the dance industry with such titles as International Grand Ball Champion and Blackpool Rising Star Latin Finalist. But that’s just the technical side of her lifestyle.

Most people know her from the hit show Dancing With the Stars, where the auburn-haired beauty excels in Latin-style dance moves and has completed three seasons. And with that comes a long list of impressive dance partners. In the second season, she danced with NFL great Jerry Rice and came in second place; in season 5, she finished 11th with model Albert Reed, and in season 9, she and UFC fighter Chuck Liddell came in sixth place. Other notable partners include NFL quarterback Kurt Warner, actor Steve Guttenberg, Olympic gold medal figure skater Evan Lysacek and boxing legend Sugar Ray Leonard. Oh, and did we mention she married another DWTS alum, Jonathan Roberts?

Now residing in Los Angeles, Trebunskaya talks to Runway about the differences between fashion in Russia and the U.S., why she loves men in pink shirts, the best fashion advice she ever received and her top designer picks.

Runway: What do you like best about working on the show Dancing With the Stars?

Anna Trebunskaya: I love the creativity that surrounds DWTS. I feel very blessed to meet all the amazingly talented and accomplished people.

R: You’ve been paired with such celebs as Jerry Rice and Chuck Liddell. What has been your favorite season to date?

AT: I’ve loved something about every season, and I’ve had unforgettable experiences and learned new things with each celebrity. Of course, with Jerry Rice and Evan Lysacek, I got to go to the Finals-that was amazing. But it was fascinating to see the transformations of Chuck Liddell, Sugar Ray Leonard and Kurt Warner into dancers. I also became friends with their families and felt their support every second of the journey.

R: What is one of your favorite fashions for the dance floor?

AT: Old Hollywood glamour. It’s a style that makes everybody look gorgeous.

R: What’s your “go-to” casual outfit in your closet? And what about for when you feel like glamming it up?

AT: My go-to casual look would be a long summery dress. And a little cocktail dress with classy pumps for a dressy look.

R: Who are some of your favorite fashion designers? Are there any who create clothing that you wear on the dance floor?

AT: Diane Von Furstenberg has phenomenal prints and dresses that are a staple. Sue Wong has exciting cocktail dresses and gowns-never boring. I get inspiration from many-too many to name-haute couture designers for my dance costumes.

R: What trend are you most excited about for the upcoming fall and winter season?

AT: I love the color olive right now, and it’s appearing in clothing and accessories for Fall/Winter 2011-2012. And the other day, I saw a lady wearing a blue dress with a red purse and nude patent leather pumps-wow, I’m in love!

R: How does fashion in Russia differ from the U.S.?

AT: I feel in Russia, women are experimental with colors and dress more flashy. On the other hand, guys dress more fashionably and dressy in the U.S.

R: What surprising trend do you like when it comes to men’s fashion? What outfit should a guy wear to impress you?

AT: I love men in pink shirts. It’s such a soft color, but it looks amazing on some men. If you want to impress me, show me your personality, but a nice suit is a good start!

R: What can DWTS fans expect from you in the future?

AT: I love playing dress-up on DWTS and having a completely different look for each dance. My fans can expect that.

R: What’s the best fashion advice you ever received?

AT: “Dress your body to make it look the best” was advice that stuck. It’s not about the newest trend you are wearing, but how it complements you.