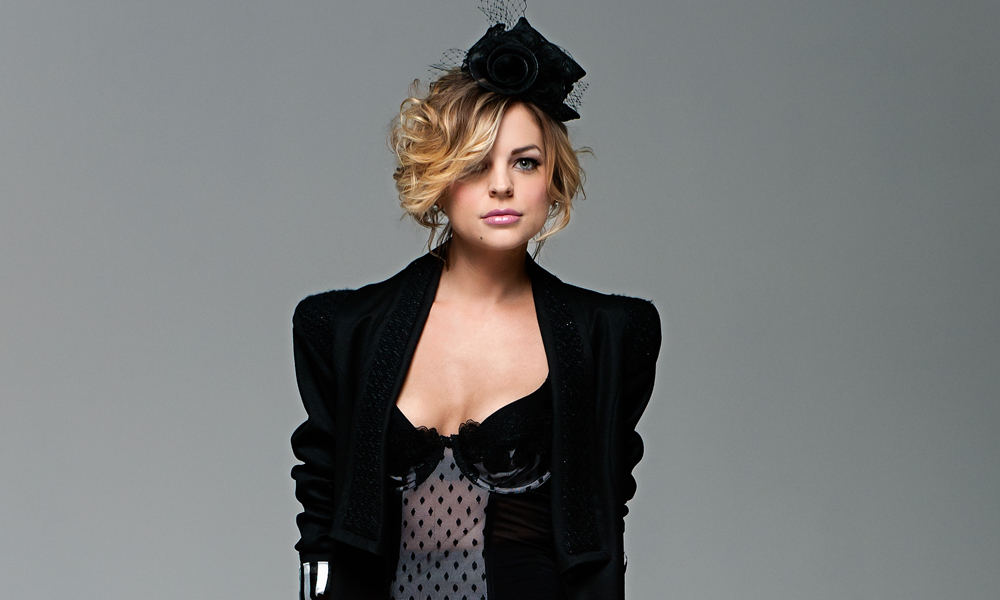 Runway caught up with Storms on the set of the popular ABC soap opera General Hospital, where she portrays the mischievous Maxie-a role that garnered her an Emmy nomination in 2009. The busy soap star took time out of her hectic filming schedule to chat with us during her lunch break about her new E! reality show and many other things.

Runway: You do a wonderful job portraying Maxie on General Hospital. Are there any similarities between you and your character?

Kirsten Storms: Yeah, there are a few. I’m not going to try to claim too many similarities between Maxie and me because she’s a little crazy. I try to put little quirks in her that I would like to be able to have. But in the real world, a lot of the things she says and does aren’t politically correct. She’s a fun character to play and there are a few things we have in common, but I try to stay a little more level-headed.

R: Do you ever run into overzealous fans who identify you as Maxie?

KS: Yes. Fans who approach me generally call me Maxie and relate to me as if I am the character. I get excited when I actually meet someone who knows my name. That’s always a plus. However, it’s understandable because we’re on television every single weekday. We’re in people’s living rooms so they feel they know us when they meet us, and that’s always very interesting.

R: You’ve been acting since the age of 5. Have you ever pondered another career choice?

KS: I don’t know if I’ve necessarily ever thought about doing anything else. It wasn’t something I planned on considering, but now that I’m getting older, I’m definitely thinking about that kind of stuff. Fortunately, for now, I don’t have to worry about that. I wouldn’t mind going back to school. Going to college. Finishing my education is something I always regretted not doing.

R: We all go through puberty and so many different things in our lives-and as a young Disney star, you had your life play out in the public eye. How was that for you and your family?

KS: It was difficult as a teenager because you already go through so much peer pressure. Then you add the pressure of doing Disney movies and handling jealousy with girls and weird situations with boys. I didn’t have a dating life at all. It’s harder to trust people when you’re a teenager in the business. I think that was difficult to get used to and I think it probably affected my siblings as well. It kind of changed the way they grew up and how their friends acted around them.

R: What do you see as your dream role?

KS: I’ve always been into Jane Austen novels so I wouldn’t mind doing a period piece, but I would definitely have to work on my British accent. But something like that, really romantic and whimsical.

R: Where do you see yourself in 10 years?

KS: Maybe with a family and settled down a little more. Not working as much. Hopefully someplace just as wonderful as where I am now.

R: How do you feel about soap operas starting to go off the air?

KS: It’s sad. I grew up watching soaps with my mom. She watched The Bold and the Beautiful. I’m hoping that with soaps moving online, soap fans will still want to watch. But it’s like the end of an era. We’re keeping our fingers crossed that General Hospital stays around for a while.

R: We hear you’re shooting a new reality TV show for E! called Dirty Soap. How are you adapting to cameras following you around?

KS: It takes a little getting used to. I’ve been doing soaps for 12 years, so I’m really used to the schedule and how things work on our set. So I think it’s just about getting used to different schedules. It’s a small adjustment, but I can handle it.

R: Tell us a little more about the show.

KS: The cast includes Kelly Monaco, who’s a really good friend of mine; Nadia Bjorlin; her live-in boyfriend, Brandon Beemer; Farah Fath-she and I used to be roommates; her boyfriend, John-Paul Lavoisier; and me. The show basically chronicles the lives of soap actors. It’s such a different genre of television than anyone has seen before. I don’t think people really know how much we work and all of the stuff that we do. It should be really interesting.

R: Can you give our readers an idea of your personal style?

KS: I’m a casual, trendy person. I have five things that I love in my wardrobe that I mix and match with other things. I don’t dress up a lot. It’s very rare that you’ll catch me in a dress to go out. I’m into skinny jeans and heels.

KS: I love Chanel. I love the story of Coco Chanel. I remember my mom wearing her perfume growing up.

R: What is your daily beauty regimen?

KS: I’m trying to get more into skincare. I’m dabbling in skincare products I like. I’m pretty big on the Clinique All About Eyes Serum.

R: With such an intense schedule, how do you handle stress?

KS: I handle stress by resting, spending time with my friends, taking alone time and taking one day at a time.

R: Any advice for those interested in following your path and becoming an actor?

KS: I’d say if this is something you’re interested in and you’re passionate about it, go for it. Try to have some idea of something else you’d like to pursue as well. I wouldn’t think that it’s necessarily the best idea for kids to get into the business so young. I think it changed the course of my life quite a bit. I would have liked to maybe go to high school and see other options I had. That would be my advice, especially for parents putting their kids into the business-make sure the kids have other things in their lives that they’re interested in.

R: Who would be your ideal type of guy?

KS: A normal guy. Not an actor. If I look at a guy and it looks like he took longer to get ready than I did, then I wouldn’t be interested.

R: What else would you like our readers to know about you?

KS: I don’t want to be perceived as someone who has it all figured out. I certainly don’t feel entitled or like I’m a superstar. I’m still growing, learning and figuring things out. I want to experience the ups and downs of life.