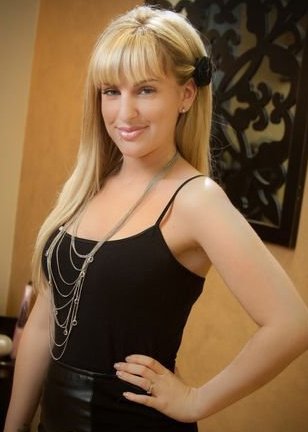 As a hair extraordinaire, entrepreneur, and television personality, Ashley Stone, may be best known as ‘Blondie’ on the small screen, but she has been making a name for herself in the beauty world for the past decade. This Connecticut native is not only a talented and successful businesswoman, as the owner of Salon Alexander and Beauty Entourage (traveling hair and makeup business,) but thanks to her efforts and determination, she is now an expert in avant-garde hairstyling as well.  Blondie was a challenge winner from the first episode back in August, with her own take on Nicki Minaj’s Harajuku Barbie look.  From that moment on, Ashley hit her stride in Fantasy Hair on the competition series and she never looked back.

We sat down with Ashley to hear the inside scoop of competing on HBS, the newest and best hair styling tips, and which celebrity’s locks she would like on her head.

Runway: How would you describe your sense of style?

Ashley Stone: My style changes depending on the day! I’m usually in salon attire and on any given day you can find me in leggings with a cute flowy top or a dress with high heel boots. I love a great skinny jean with a dressy shirt. Heels are a usual must for me! That is what I consider casual!

R: Who are some of your favorite designers to wear?

AS: I’m in the salon a lot, so I tend to shop for clothes that are fashionable, yet inexpensive. Most of which are not brand name. My favorite shoes though are ALDO. They always seem to have a confortable 5 inch heel I can stand in for 8 hrs. I have a major shoe obsession!

R: What are the latest hair styling trends?

AS: Break out your hot tools because a curling iron or flat iron will be your best friend. Loose wavy and tousled hair is a huge trend. Also, very sleek smooth styles are starting to become popular.

R: Do you have any role models or inspirations in the hair world?  If yes, who?

AS: I love Tabatha Coffey. She tells it like it is and more times than not, she is very much right. I like that she has traveled the world and worked in many different settings. From those experiences, she learned and retained different things with her own twist.  A strong successful woman is an inspiration to me and she has many successes in the hair industry. One of which is making herself a house hold name. She is memorable and I admire that.

R: What advice can you give to our readers that cannot afford salon prices but still want the salon quality dos?

AS: Take care of your hair. Moisturize and protect it. Leave in conditioners and thermal protectors when using hot tools is very important. The more damage that is done to your hair, the more you will need to see a professional to help you correct it.

R: How did you learn to do the avant-garde hairstyling that we have seen this past season?

AS: I am self taught on mostly everything I know. I have never done hair pieces such as the ones I had done on the show. I had never even heard of anyone using chicken wire or a hot glue gun in the hair! Everything I created on the show I was teaching myself as I went.  I have done some Avant Garde styling previous to being chosen, but it was only with small foam shapes that were used in addition to the model’s hair such as a square bun or a ponytail made out of foam balls.  I had never made anything that stood up vertical from the head higher than just a few inches until I was on Hair Battle Spectacular.

R: What was the most challenging battle in the series?

AS: Most battles were challenging for me because of my lack of experience with Fantasy Hair. If I had to choose one, I would have to say that the Finale was the most challenging.  I had to make 3 separate hair pieces in a short amount of time, which was tough. Plus, all three pieces had to have very sturdy foundations, as the hair couldn’t fall off the model’s heads while they were dancing.   Throughout the season, I was always able to get my hair pieces to stay on the model, but oftentimes, it came down to balance.  Having the models dance was going to be a true test to the sturdiness of the foundation and it was definitely tricky.

R: What is was your favorite part about shooting season two? Were you a fan of season one?

AS: Every time I was in the salon it was my favorite part. It’s what I was familiar with, so it was comforting to be there. I was always excited for the next thing they would throw at us and loved filling my brain with a million ideas that I could create.  I actually didn’t really watch season one.   I didn’t really understand the concept of fantasy hair. The best thing I got from being on the show this season was realizing art can come in many forms. Some of which are misunderstood.  Even though you might not see the artistic value in something, someone else does. And the feeling it gives is a positive one so how could you go wrong?

R: You have two successful businesses, was it difficult to get either your Beauty Entourage and Salon Alexander started or were both always a success?

AS: Beauty Entourage was always a success. I had no issues getting it going and things grew and progressed at a pace that was manageable. The risks starting up were minimal and there wasn’t much overhead when I began.  It was a very niche market and by word-of-mouth, the business quickly grew.

Salon Alexander, however, required more of an investment and a risk.  It took time for me to build my salon, to make it unique and stand out from the other salons that exist on every other corner.  With the determination and hard work, came very long hours, expensive mistakes, and lots of moments where I questioned myself. Ultimately, I wanted this salon very badly.

When I decided to open Salon Alexander,  I had a full clientele who were loyal to me. Although that was enough to get me by, I certainly couldn’t be the only one working there. No matter how successful I am alone as a stylist, it means nothing if I’m the only one covering all expenses.   I spent two years covering the initial expenses, but couldn’t find the right people for the salon.   Luckily, I was busy enough to eventually take yet another risk, by moving my salon to a bigger and more accessible location. Once doing so, the salon took off! I still work the long hours but, I enjoy them more now accompanied by other stylists in my salon just as busy!

R: What advice would you give fellow hairstylists interested in exploring their entrepreneurial aspirations, like you have?

AS: Research everything! There are so many more aspects to a salon than just doing hair. Make sure that if you decide to go into business for yourself that you love what you do. It has to become your life! Being a business owner is not a job, it is a lifestyle.

If you’re looking to have a business to have more freedom and flexible hours, then having a salon may not be what you should be doing.  Explore all options before making any decisions. A business plan is important to have whether you need one or not. It helps outline exactly what you are looking to do and the reality of expenses.  Always have an exit strategy. No plan is ever fool proof and things can happen.  Lastly, be an experienced stylist before taking that jump to salon owner. I may have been only 23 when I opened my salon, but I was already a booked stylist at the salon where I previously worked. I had clients that would follow me if I left. Without them, I would have never made it.

R: What is one thing our readers would be surprised to learn about you?

AS: I’m a PTA mom! I’m proud to be a member of my son’s PTA at his elementary school and I do a lot of volunteer work. I am a room mother. So every Monday on my day off, I volunteer in his class for an hour. Also, once a month I volunteer at the local hospital teaching women going through chemotherapy how to do their make up and style their wigs.

R: If you could swap hair with any

one, (dead or alive) who would it be?

R: What is next for you?

AS: The Runways of NYC. It’s been a dream of mine since I was little girl. I had my son young so I chose another route but, I’m still going for that dream!  I used to watch videos from fashion week in awe of runway hair and one day I will be in awe watching my own work in person.