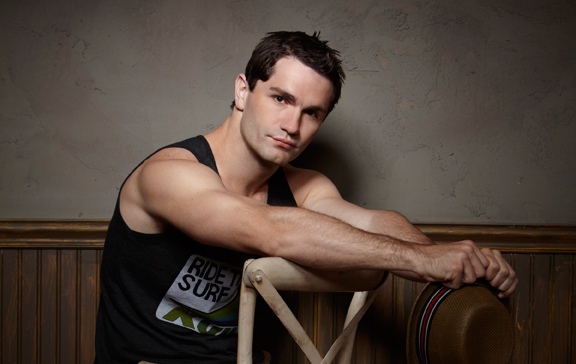 But the 33-year-old says his personal style is pretty much limited to a T-shirt and jeans. His go-to outfit? T-shirt and jeans. And his fashion icon? Why, Jeans and T-Shirt Man, of course. After all, the 6’1″ actor/musician already exemplifies the classic tousled yet stylish persona. Sam is probably most recognizable from his current role as Aidan on the supernatural drama Being Human on SyFy Channel, but he has also worked on such shows as Battlestar Galactica, Smallville, CSI: Crime Scene Investigation and Dexter. He’s also recognized for lending his voice to a video game protagonist, and is the lead singer of his own band, The Crashtones, who released their first CD in 2006.

Sam gives Runway his humorous take on Aidan’s garlic allergy, the impact that video games have had on his career and the scoop on two recent projects.

Runway: Do you relate to your On Being Human character, Aidan, at all?

Sam Witwer: I like that he’s a man of conscience…or at least he is deep down. He also happens to be a vampire, so that throws a monkey wrench into things. As for how we’re similar, we look a lot alike. Almost exactly alike. As for standout moments, I loved Aidan’s allergic reaction to garlic and the broad comedic nature of that moment. Nice to have Josh [the werewolf] play the straight man for once.

R: Can you let us know something unique behind the scenes?

SW: I don’t wear any makeup. Everyone else does, thus making me look pale. A seeerious white guy.

R: What about fashion? What’s your personal style?

SW: Jeans and a T-shirt.

SW: Jeans and T-Shirt Man. He’s a superhero with the power of jeans and a T-shirt.

R: You’ve worked on productions such as It’s Always Sunny in Philadelphia, Star Wars, Dexter and Crank. What has been your favorite role?

SW: Aside from Being Human, I really dig playing the Starkiller character from Star Wars: The Force Unleashed. It was fun to adopt a 1940s pace to the character and give him a 1970s antihero feel-hopefully making him blend in with the style that Mark Hamil, Harrison Ford and Carrie Fisher created for that original 1977 film. As a side note, Dexter‘s Neil Perry was actually quite a lot of fun. Disturbed characters generally aren’t fun for me to play, but Neil was fun.

R: You’ve completed production on two projects this past year, The Return of Joe Rich and No God, No Master. Can you talk a little about them?

SW: Both fun experiences. It was wonderful to work with David Strathairn and Armand Assante. They’re both heavy hitters, and a callow youth like me can learn much by emulating them. I am privileged to call David a friend. He’s an extraordinarily humble actor, which is funny since he’s generally also the best in whatever room you find him in.

R: Besides acting, you also have worked with LucasArts on a video game, where a character was modeled after you.

SW: LucasArts really wanted to tell an epic story that fit within the canon of the Star Wars movies-between the two trilogies, to be exact. Because they wanted to give it a real cinematic flavor akin to the originals, they hired actors for both likeness and voice.

As for Starkiller, I happened to look exactly like the concept art they created. Add the fact that I’ve been doing my Star Wars homework since I was born, and I was the guy for the role. I love that the character has been embraced. I never thought a video game could make such an impact on my career, but it has. I get recognized for that character all the time. For a Star Wars fan to be strongly identified with a small contribution made to that mythos is something beyond anything I dreamed.

R: How did you come to form your band, The Crashtones?

SW: Actors are blessed (or cursed) with downtime. Crashtones was what I did to occupy myself between long periods of waiting for the phone to ring. The wonderful thing about music is that no one has to audition you, interview you or otherwise give you permission to write and record a song. So that’s what I did-to the great dismay of anyone who’s heard it. It’s for me and my friends. It’s weird. It’s a little jarring. There might be a song or two, though, that you can play for your girlfriend.

R: What are you guys working on now?

SW: We’re trying to kick out a second album, but that downtime I’ve talked about has become scarce-which is wonderful, but annoys the frustrated, longhaired musician inside me.

R: Speaking of girlfriends, what fashion do you prefer on members of the fairer sex?

SW: Jeans and a T-shirt. Or, ya know, like a comfortable dress.