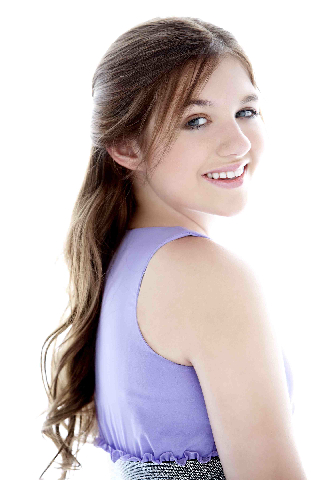 Far from your typical thirteen year old, the leading lady of the supernatural, psychological thriller, “Within,” Mia Ford seems to be spending more time on-set then on the playground.

Following in her sister’s footsteps, with hopes of also becoming an actress, Mia enrolled in acting classes at the age of five. Eight years and several roles later, Mia is embarking on life as teenager, juggling school, homework, tests, acting classes, auditions, scripts, performing, and everything in between, all the while traveling back-and-forth between Los Angeles and Texas. Landing roles in the Emmy Nominated television show, “Jericho” and alongside Matthew Broderick in the film, “Wonderful World,” Mia is on her way to stardom.

We sat down with Ford to discuss her latest film, “Within,” to find out what it is like growing up as an actress, and to get the scoop on her style.

You have an impressive acting resume for such a young age, can you tell us how you got started?
I started taking up an interest in acting when my sister, Madison Ford, started taking classes from Acting Coach Cathryn Sullivan. I thought it looked like a lot of fun, so I began studying film acting with Cathryn at the age of five. From there, I signed with a local Dallas talent agent, and with them I began auditioning for commercials, films, and TV shows. At the age of seven, I wanted to broaden my acting opportunities, so I went out to Los Angeles and signed with a LA-based agency. A few months later, I headed out to Pilot Season for the first time, where I was fortunate enough to be given amazing opportunities, like auditioning for leads in feature films, TV shows, voice-overs, and also commercials. I booked a Ford car commercial the first month in a LA. A few months later, I booked a lead in the short film, “Imaginary Friend.” Over the past few years, I have had amazing opportunities to work with extremely talented actors and directors in various projects, including in the television series, “Jericho”, the feature film, “Wonderful World”, starring Matthew Broderick, and the psychological thriller “Within.”

You must be very busy. How do you manage schoolwork in between acting? Is it hard?
It’s true that my life can get very busy and crazy at times, but I see it as a fun kind of crazy! With the help of my teachers, principal, manager and family, we can work together to manage my schedule so I can fit it all in! Many times I have a script to learn and homework to complete, so I’ve learned how to manage my time by working in the car or on a plane. Sometimes it can get a little difficult, but at the end of the day, I am doing what I love.

What was it like working on “Within?”
Working on “Within” was probably one of the best experiences of my life, to date. It was a fantastic script, and I landed the lead role. My character, Rachel Weiss, was am in-depth and dramatic role. This character was fun to play because she has the unique gift of seeing dead people. For young actors like myself, such an intriguing role is rare. “Parenthood’s” Sam Jaeger played my dad in the film. He is an amazing actor, fun to work with, and a supportive person. We even played “Uno” during our breaks! I am so thankful that the director, Hanelle Culpepper, gave me this wonderful opportunity!

Did you travel to France for the screening of “Within” at The Strasbourg International Film Festival?
Yes, my mom and dad did take me over to France for The Strasbourg International Film Festival last fall. It was a wonderful experience, I so many interesting directors and actors from around the world. I felt honored to be nominated for in the category for “Best Actress Award in a Feature Film.” I always have a blast going to different film festivals. The town of Strasbourg was beautiful, and I hope to go back and visit again someday.

Tell us about your favorite fashion style.
I would have to say that my fashion style is very eclectic. From Bohemian LA Chic to a classy New York City trendy, everyday I dress in a different style. Maybe as I get older, I will have a favorite style, but right now my style depends on my day-to-day mood. No matter what the style is that I’m wearing, I always make sure that my outfit has color. I like to mix and match clothing from my closet and my sister’s closet, to create a different look everyday. I’m lucky to have a sister who lets me borrow her clothes.

What is your favorite trend for the summer?
My favorite trend for the summer would have to be the denim jacket. I’ve always loved denim jackets, and I’m ecstatic that they’re one of this summer’s hottest trends. They go with everything and they’re flattering. I also love the nautical look this summer. One of my favorite pieces in my closet is my navy blue and white-striped nautical shirt. I can pair it with a denim, white or khaki pair of shorts or a skirt. This look is so cute for a hot day.

Who is your favorite designer?
My favorite designer is Valentino, I admire his style and designs. Every piece is beautiful, sophisticated, and yet still youthful. I love watching “Project Runway” with my sister and my mom every week! I love witnessing what the designers create with the challenge they are given each week. It is fascinating to see what innovative designs they can create.