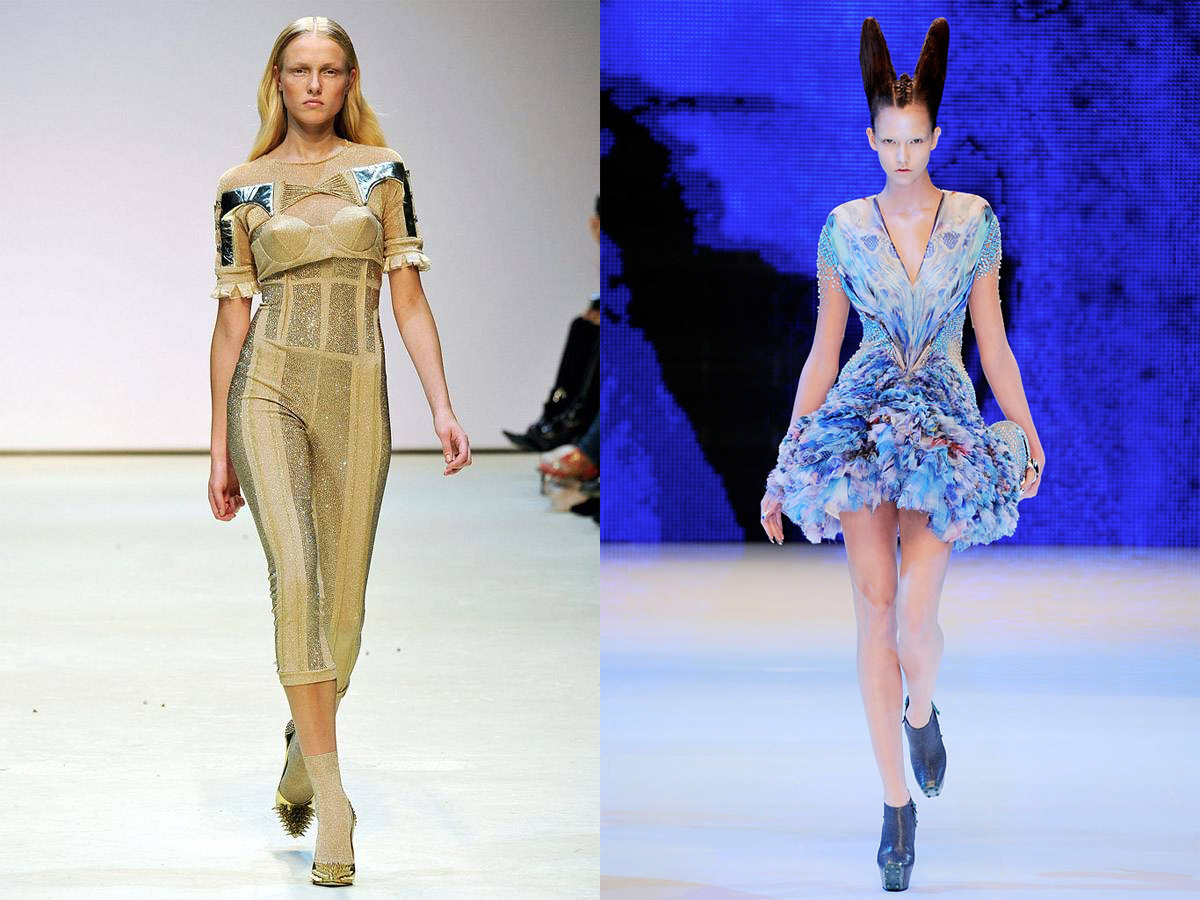 Futurism. It’s something of a paradox. The future cannot be predicted; but in envisioning it, we can create self-fulfilling prophecies. You could go crazy just thinking about it – so instead let’s just say that the dawn of a new decade has sent 2010’s fashion trends into sci-fi and futurism overdrive.

So how do we define futuristic fashion? As a Spring 2010 fashion trend it seems to be less about gadgetry and more about future environments. We’re faced with collections that contemplate dystopia or evolutionary change. Topics of science fiction are woven into the threads of some designers’ clothing, while others base their designs on more traditional views of futurism.

The futuristic influences upon fashion in 2010 are far and wide. We’ve seen everything from the re-interpretation of 1960s views of space age fashion (like the raised collars and metallic fabrics at Louise Goldin), through to reptilian eco-evolutionary creatures at Alexander McQueen andJulien MacDonald; while the likes of Karl Lagerfeld had metallic foil detailing which more called to mind the abstract art of the original early 20th century futurists, who revered technology and speed.

If anything the continual thread through it all is a deep contemplation about what the future might hold. There’s wonder more so than excitement; and, for some, trepidation. Science, technology, and the environment – and humankind’s effect on the world – are playing upon many minds. But it’s not all doom and gloom. Futuristic themes can be fun and playful, as well as stark and fierce.

A subset of the futurism trend is the future warrior; a fierce and forwards-looking collision of the military and tribal trends. Ancient civilisations come to life with a futuristic twist, in leather tunics, metal plating, and war paint. Unequivocally fearless and with room for endless creativity, the main criteria for the modern warrior is confidence. Click to read more about the future warrior trend.

Again this trend spans multiple styles and influences, but here are some of the significant common elements we’ve seen appearing:

How to wear it

This is one trend for which the runway interpretations were spectacular – especially the likes of Alexander McQueen, who put together an entire evolved look. But if you don’t want to look like an Avatar creature from the world of Pandora, or a twisted faun that belongs in Pan’s Labrynth, maybe the whole horn-hair and prosthetic gills things isn’t for you. We’re not surprised.

McQueen’s dresses translate well to the street, however, once you leave all that stuff behind; as do many others of the sci-fi inspired looks. The key is to be bold and embrace things a little strange and, well, alien. But you can also play them down by pairing futuristic pieces with more classic ones. Just remember that when it comes to the future, we’re dealing with something that doesn’t exist yet… and so, the possibilities are endless.