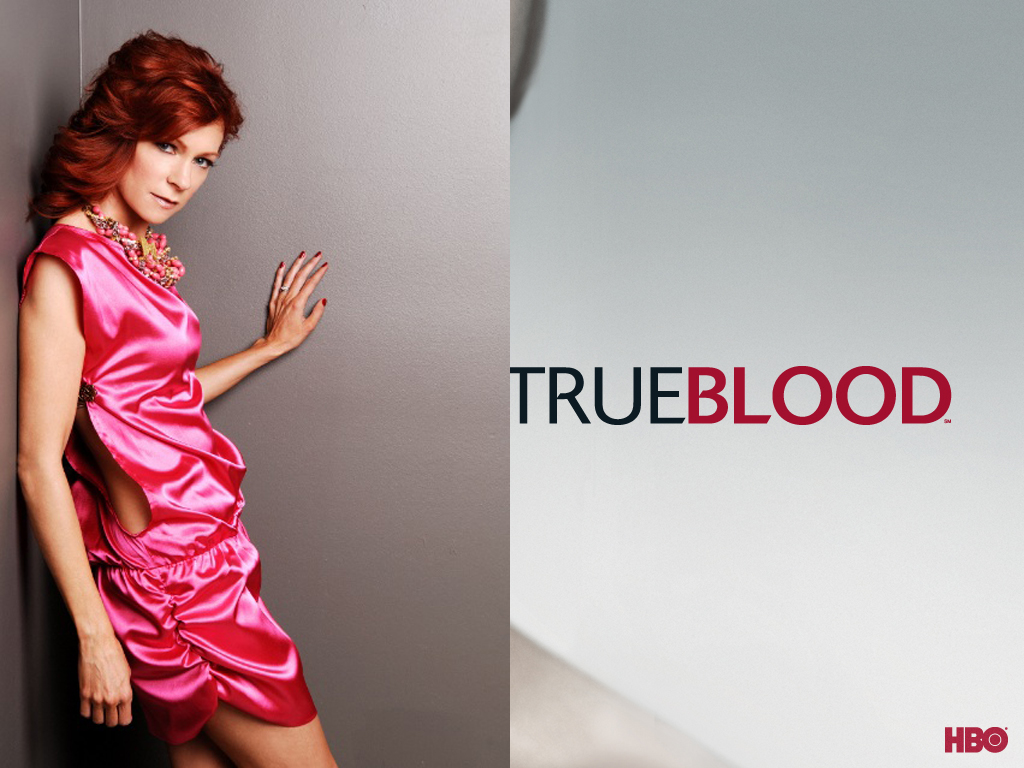 As the sassy redhead on the HBO hit series, “True Blood” currently setting the airwaves on fire with the third season of the show, Carrie Preston stars alongside Stephen Moyer and Anna Paquin.

Preston’s breakout role as “Miranda” on the Broadway production of Shakespeare’s “The Tempest,” led to roles in major television series such as “Lost” (Fun fact! She is married to Michael Emerson who plays Ben!) and “Desperate Housewives” along with acclaimed films including Woody Allen’s VICKY CRISTINA BARCELONA and the Oscar nominated TRANSAMERICA.

Now, Preston plays the role of “Arlene Fowler,” a kind-hearted waitress and the mother of two children in a small town in Louisiana. Everyone’s wondering what happens this season!

We sat down with Carrie to discuss how her character unfolds in season three, her fashion style, and we even found out that the multifaceted Southern-born actress has also made a career out of producing!

Tell us about how Arlene is different this season.
The audience is going to see a deeper, more emotional side of Arlene this season. However, it’s not the familiar histrionics that she displayed in the first two season. She’s grappling with something quite big and personal, so there will be more of an insight into how she deals with stress and pressure. She’s still serving up a lot of the humor of the show, but it was a nice change of pace for me to be asked to tap into a deeper well of emotions this season.

You guest-starred on an episode of THE GOOD WIFE, tell us about that experience.
I actually had the great fortune of doing two episodes. I’ve been a fan of the show since the pilot. The cast is terrific, and everyone on set was very welcoming. Their writers gave me a real gem of a character in Elsbeth Tascioni (how’s that for a mouthful?) On the page, they created a quirky, mysterious, smart and complicated woman, and I was honored that they sought me out to bring the character to life. Plus Julianna Margulies and I did a Broadway show together four years ago (“Festen”), so it was a treat to work with her again. Some of my scenes were with Titus Welliver, who was also on my husband’s (Michael Emerson) show “Lost”. So in a funny way, Michael and I were both battling the Smoke Monster at the same time!

What are your top 3 fashion disaster rules for women? What should they NEVER wear and why?
1) I think the micro-shorts where the bottom of the butt is hanging out just doesn’t look good on anyone no matter how rocking the glutes. The same goes for the thong bikinis. I think the rule there is to leave some things to the imagination; it’s sexier. 2) If someone’s fingernails can double as tools or weapons, they are too long 3) Don’t wear long full jackets with long full skirts. I don’t think they look flattering, no matter the person’s body type.

Who is your all time favorite designer and why?
I’m someone who gets around fashion wise. I like all kinds of designers for all kinds of reasons. Some of them are Catherine Malandrino, Nanette Lapore, Theory, and Betsey Johnson. They all tend to have silhouettes that are inventive, flattering and even a bit whimsical. Those are the designs I gravitate towards.

Tell us about projects you have coming up besides TRUE BLOOD, we hear you are producing?
I have a production company, Daisy 3 Pictures. We have produced two features and a short film. Now we are teaming up with Locomotive (Lucy Barzun Donnelly and Joshua Astrachan) to produce a screenplay written by actress Kellie Overbey, and I will be directing it this fall in New York. It’s a comedy called “That’s What She Said,” which I like to call “an East Village Sex and the City.” It’s the women’s answer to all the “men are boys” movies that have been ubiquitous these days. As for acting, I have three movies coming out soon. “What’s Wrong with Virginia,” with Jennifer Connelly, “A Bag of Hammers,” with Rebecca Hall and Jason Ritter and a movie I just shot in Texas called “Sironia” with musician turned actor Wes Cunningham.