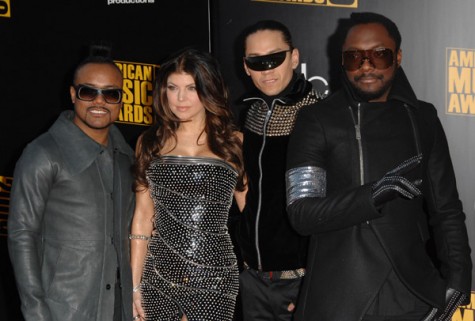 The Black Eyed Peas had their concert in Los Angeles with LMFAO and I had gotten an invite to the official Bacardi VIP party at the Conga room inside the new LA Live complex.

I’ve got to say that sometimes I’m surprised at how much I really love this job! To be the person that brings you into an event that you aren’t able to attend is awesome!

It was a mad house inside LA Live where the group had been performing. I have never seen so many people in such a small space before and they were all there because of the Black Eyed Peas or for LMFAO.

When I got into the venue, I made my way to the Bacardi VIP lounge, whose area was to the left of the stage giving me and everyone else a clear view of all the action. If you were not able to see from the floor, you could go upstairs where they pretty much had a sky box to see everything. I did see some of the performance from there, but you know as well as I do that being on the floor is always the best thing. It’s similar to being at a Laker game. If you have a seat a few feet up, then you get a much better view than if you where on the floor. However, being on the floor gives you a VIP feeling that doesn’t compare to anything else.

I walked around scoping the place out before hitting the bar for a quick Coca-Cola. I was informed by the nice bartender that I needed some kind of card before she could serve me. I asked nicely if I needed to get a card if all I wanted was a Coke? She smiled and informed me that she needed it for everything. Now, I had to go searching for the right person to provide me with the golden ticket as I like to call these liquor cards.

While I figured out who had the cards, I found a great little table set up with food. Now, I needed to figure out if I needed a card to get some of this, too. I didn’t see anyone, so I enjoyed myself with some pizza, chicken fingers and fries. You know what I always say: “If they have food and drinks, I’m not going to complain!” I also can’t complain when a beautiful woman walks in. While looking around, an angel showed up. When she smiled, it could light up the room.

The woman I am talking about is Swedish film actress and model Ms. Malin Maria Åkerman, who you may know from the movie “Watchmen” or perhaps from her guest appearance on HBO’s Entourage.

We talked briefly about what she’s doing right now. Ms. Ackerman informed me she’s in a movie that was set in New Orleans and is very excited about it. I knew I should have had a recorder with me but didn’t. All she really wanted to do was enjoy her evening and not really be bothered by a pesky columnist. I have to say that Ms. Åkerman is one of the nicest actresses I’ve had the pleasure of speaking with in a non- Hollywood capacity.

I also had the pleasure of meeting her husband of three years Roberto Zincone, who’s an Italian musician. What did you think, that this Swedish bombshell was single? No, they always have someone. Fortunately, he was a pretty cool and down to earth guy.

I finally ran into one of the publicists who gave me those magic cards that I needed to take full advantage of the bar and the Bacardi that was available. So, while LMFAO was getting ready to take the stage, I myself was ready to enjoy the bar and what I believed it had to offer.

When LMFAO was on stage performing a few songs, the crowd was going nuts and really enjoying themselves dancing and having a great time on the floor.

It had to be kind of ruined by someone with sticky fingers. I was pushed around by a man who said we had to move. I checked him out and he wasn’t dressed like house security, which I found odd. Some of the other VIP’s didn’t want to move either. I think it had to do with him giving us orders without actually having the power to do anything except scream at us. I asked him what he wanted and he said that he needed us to move. I wondered for a second and then found out that New Orleans Saints running back Reggie Bush was there.

We still refused to move even though his bodyguard wasn’t nice or professional. What many people don’t understand is that a bodyguard isn’t allowed to manhandle you if you’re not a threat to his client. His rough treatment of myself and other VIPs constituted grounds for assault, but I wouldn’t allow his grandstanding to ruin a great evening.

I was able to get a quick word in with Mr. Bush and let know know that I thought he was a great guy despite how his bodyguard acted. He just wanted to enjoy the show just like everyone else.

LMFAO was still on stage and were accompanied by a huge entourage. Suffice it to say, many were attractive and only added to the quality of the performance.

The group continued their energetic performance and were later joined by Taboo and Will.I.Am from the Black Eyed Peas. Upon their arrival, the party kicked into another gear as members of both bands entertained the crowd in a high octane performance that kept the audience out of their seats.

At the end of the evening, a nice girl wanted to dance with me and if you know me, you understand my white behind can’t dance if my life depended on it! Although, I let her in on the secret, she stubbornly dragged me on to the floor to teach me to dance. As Kevin James from the move “Hitch” learned, I needed to “stay in the box”.

Mercifully, my stint on the dance floor came to an end with the DJ telling us to go home. Nevertheless, it was a great evening filled with celebrities, VIP treatment and even me getting In touch with my inner “Boom, Boom, Pow!”