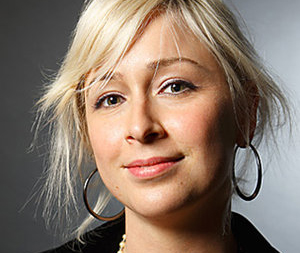 Marie Robinson, formerly of Sally Hershberger Salon, colorist to Uma Thurman, Scarlett Johansson, Anne Hathaway and more, has branched out on her own. Robinson opened her own salon (with business partner and stylist Abell Oujaddou) in New York City’s Flatiron neighborhood this week. She had been with Hershberger’s salon for six and a half years and her departure was unexpected.Robinson has been widely known for her seamless sun-kissed highlights for years, as well as her understated demeanor in what can be a catty workplace. Without solicitation, seven of Hershberger’s staff followed Robinson to the new salon. When WWD asked Robinson to explain, she speculated that “due to Hershberger’s busy schedule, [Robinson] ultimately ‘became a liaison between the employees and Sally. I think we became a very tight family [because of her absence].'” Hershberger’s absence can be traced to three eponymous salons, and the launch of two successful product lines — a mass haircare line in 2008 and her recent HSN line launch, Salon. The new salon, designed by James Huniford, boasts 26 chairs, huge windows and both Shu Uemura and Davines hair care lines. Makeup artist and brow guru Landy Dean will take up residence, and global stylist Danilo will occasionally work from the salon.As WWD reports, many stylists eventually leave the nest and strike out on their own. Robinson and Hershberger have know each other for 11 years; they met while working at the John Frieda salon, where Robinson ultimately became Hershberger’s personal colorist and remained so until this upheaval.Robinson’s final words:“It wasn’t personal,” Robinson said of her decision to leave. “It was business. [Hershberger’s] incredible. If I hadn’t started my own salon, she would have been my only boss,” Robinson said.We’ll take highlights from Marie Robinson anywhere we can get them. She’s that good. The Marie Robinson Salon is located in New York City.