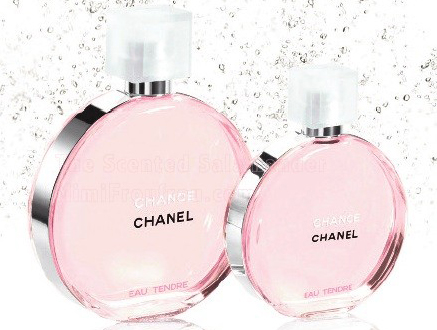 Chanel Chance Eau Tendre (lit. Luck Tender Water) is the newest addition to the Chance fragrance franchise which was inaugurated in 2002. The house is presenting it as a fruity-floral twist on Chance Eau de Parfum (there is also an eau de toilette and an extrait.) It is signed by in-house head perfumer Jacques Polge. When the progenitor Chance launched it was said that the scent was made to feel deliberately young. In 2007 Chance became fresher with Eau Fraîche. In 2010, the name Eau Tendre and the pink-colored jus suggest further interest in appealing to still younger women. Smelling side by side Chance EDP and Chance Eau Tendre, I have to admit that the most recent iteration of Chance does make Chance EDP smell older even mustier (it’s a chypre.) It is as if brands – not just Chanel (cf. Miss Dior Eau Fraîche) are now looking for the fountain of youth in fragrance formulation to appeal to the Millenial Generation.

Chance Eau Tendre opens on a very green, very radiant tart and sweet plummy quince with undertones of pencil shavings (cedar wood). The fruity and woodsy notes soon become much more present and pungent with traces of cumin while the white, transparent and salty musks amplify. The fruits in the composition by now have become more stewed-like in quality (cf. J’Adore by Dior). In the midst of the transparent and crisp grassy scent there is an aura of darkness that hangs about like the sheer-veil-like presence of a dark fruity chypre of yore (cf. Femme de Rochas.)…

It seems to me that the fragrance then showcases a perfectly controlled and consensual-smelling rose-jasmine floral core blended with smooth white vanilla (gardenia too?) and cedar wood, all meant to feel just so. It feels like it is following in the footsteps of woodsy emancipation for women, after it’s become more widely accepted. The aim here is clearly to feel familiar and comforting. It brings to mind the vision of a group of fresh-faced fifteen year old girls or so shopping for perfume together at that age when peer mentality is at its apogee and you tend to band together. They look lovely, bashful and might wonder what the others think about the perfume they are testing. It’s the whole point of this group outing, isn’t it? Well, this is the kind of vanillic rose that will probably please the gentle and pretty girls in that charming group and make them smile. Chance Eau Tendre is less femme than the chypré Chance Eau de Parfum, adopting more of the creamy-crisp green and vanillic facet of Daisy by Marc Jacobs but also replaying the green transparency of Chance Eau Fraîche thanks to an aquatic bamboo-shoot tonality. A green-blue accord is also perceptible with the hyacinth and iris.

Chance Eau Tendre is a musky floral – a casual genre of feminine fragrance. It is not as tender as its name might suggest thanks to the relatively assertive woods, the dark sensual fruits and the musky pungency, but it is at the core a virginal, innocent perfume pretending to be a bit naughty. It is a downy floral musk fragrance made for peachy girls whose cheeks are still lined with baby down. Daisy by Marc Jacobs by comparison is much more of a closet-vixen with its sexy creamy sandalwood drydown which appears demure at first then reveals a much more sensual personality. It is like the difference between someone who will be carded and busted and someone who could still be carded yet handed a bottle of white wine over the counter in the end.