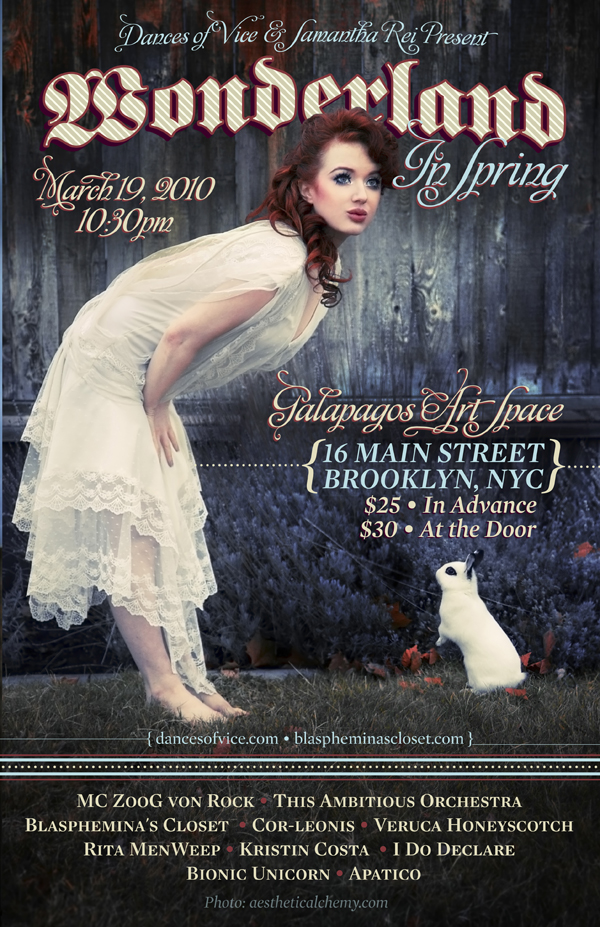 Tickets available via Smarttix.com or dancesofvice.com from 2/23/2010. CONTACT: Chandler Poling, CW3 Public Relations – 818.605.2237 2422 Claremont Ave, Los Angeles, CA 90027 – chandler@cw3pr.com F Dances of Vice impresario Shien Lee and Blasphemina’s Closet designer Samantha Rei join forces to present the highly anticipated “Wonderland in Spring Ball”, featuring the musical flourishes of 20-piece avant-garde chamber rock orchestra This Ambitious Orchestra, with special performing guests ZooG von Rock as Master of Ceremonies, Corleonis on theremin, aerial and burlesque performances leonis by the stunning Veruca Honeyscotch and Rita MenWeep, and fairy-tale fashion shows featuring the work of Blasphemina’s Closet, Kristin Costa, I Do Declare, Apatico and Bionic Unicorn. Set in the stunning, award-winning cultural venue that is Galapagos Art Space in Dumbo, Dances of Vice and Samantha Rei invite you to pay homage to the spirit of Alice in Wonderland in Dadaistic celebration of the liberating effects of nonsense, beauty, and surrealism. F As spotlighted by MTV News, Spin Magazine, NHK Japan, NY Times and Time Out NY, Dances of Vice is known for the sensational quality of its productions, and the impressive pageantry of its attendees. Dances of Vice represents the dance of decadence, of opulence and glamour in the New Romantic sense, attracting an exotic mélange of artists and bohemians from around the world to New York’s most sordidly splendid menagerie.

THIS AMBITIOUS ORCHESTRA is Brooklyn’s own symphonic rock band. Led by accordionist and singer Benjamin Ickies, this 20-member band is bringing virtuosity back to rock and roll. Ickies met tuba player Joe Exley in the early 2000’s playing in New York’s rock and cabaret scenes. As both were classically trained and loved playing punk rock, they began performing together. They continued to discover many other classical rebels on the scene, and in 2004, Ickies and Exley brought 20 musicians together to create This Ambitious Orchestra, the world’s first orchestral rock band. This Ambitious Orchestra has since gone on to play to packed houses in New York’s hottest venues playing their one-of-a-kind brand of symphonic rock. Growing in recognition, the orchestra has also been provided orchestration for bands including TV On the Radio, The Dresden Dolls and Rasputina. They are currently producing a full-length album. – ambitiousorchestra.com The infamous ZOOG VON ROCK is best known for being one half of the Australian industrial cyber punk band Angelspit. His performance style is a volatile mixture of all of his intercultural experiences of living in Sydney, Berlin and New York as a professional punk rock vagabond. Expect to be thoroughly entertained by his ballistic Master of Ceremonies style and brashly blended versions of rock and roll. – angelspit.net COR LEONIS is the music of solo artist Cornelius Loy and the performance art of his muse Christina Leonis. Together they explore psychotropic, hallucinogenic theories of the universe and the astral realm. Cornelius creates an emotional catharsis, through his ethereal recitals on Theremin, while Christina accompanies him on autoharp and vocals live, while telling the story of each song through costumed performance. Cornelius performs a constellation of arabesque, neo-classical, folk music on theremin, piano, keyboard, guitar, autoharp, and trumpet. The debut album for Cor Leonis will be released March 2010 available at cor-leonis.org. Original dolls and Photo: Anna Fischer & Holly van Voast candles made by Cor Leonis are available online. SAMANTHA REI (also known as Samantha R. Crossland) is an American Gothic and Lolita Designer. She has been designing since age 13 and opened her online boutique, Blasphemina’s Closet, in 1999. She is primarily influenced by such designers as Alexander McQueen, John Galliano, H.Naoto, and Vivienne Westwood, as well as historical fashion, horror manga and children’s books such as Alice’s Adventures in Wonderland and the Edge Chronicles. In 2006 she started her menswear line, Marching Achilles, named for her brother. Rei is a graduate of the Minneapolis Community and Technical College, has won several awards and has been featured in such magazines as Shojo Beat, RX, Five Four, OUCH!, Gothic Beauty, Coup de Main and the American Gothic and Lolita Bible. Her new Spring/Summer 2010 Collections “enfants sauvages de la forêt” and “le pays des merveilles sauvage” will premiere at Dances of Vice. – blaspheminascloset.com Photo: Photosynthetique Imagery KRISTIN COSTA is a painter, sculptor and costume maker, and attempts to roll them into one entity. She has worked for various costume studios around NYC, and has worked on films, plays, ads, murals, and puppets. She is currently launching a corset business that specializes in hand-painted corsets and accessories, which can be found through kristincosta.com. APATICO is the creation of designer Megan Bishop. Inspired by Victorian, gothic, Lolita, punk, aristocrat, fetish and clubwear as well as taxidermy and historical costumes, Bishop’s line embodies “deconstructed decadence”. – apatico.net BIONIC UNICORN offers eco-friendly steampunk and statement jewelry by Minnesotabased artist Kristin Berwald. Berwald’s designs make a statement of bio- mechanic harmony, using antique pieces to create one of a kind designs. – bionicunicorn.com I DO DECLARE is the creation of New York based designer Kelsey Hine, whose unique brand specializes in theatrical pieces with themes that vary from heraldic imagery to those incorporating a Rococo aesthetic. Skilled in projects ranging from dramatic costume gowns to clothing suitable for daily wear, Hine presents a diverse collection of custom, hand-made fashion. Present contact can be made at i_dodeclare@hotmail.com. RITA MENWEEP is a co-founder of the newly formed Conatus Production Co. in NYC, and has produced and choreographed burlesque and theater over the past 3 years. She has performed at countless venues in NYC including The Zipper Factory, Coney Islands “Sideshow by the Seashore”, The Slipper Room, The Orseanz Theater, and Corio, as well as venues in major cities across the US, including Las Vegas, Chicago, and more. VERUCA HONEYSCOTCH is adoringly dubbed “The Pint-Sized Powerhouse of Burlesque,” known for combining the sensual elements of burlesque with spectacles of aerial circus, as well as humor and theatre to create captivating, vignettes. Theatre critics have called her performances “breathing-taking, coy, and commanding!” She has been seen dancing and soaring above New York City stages and into the hearts of audiences coast to coast since 2006 with her burlesque troupe, The Peach Tartes. As a solo performer, temptress Veruca continues to delight audiences with her sexy stage acrobatics in a variety of cabaret shows throughout NYC. Miss Honeyscotch was featured in last year’s Tease-O-Rama Festival in San Francisco. She will travel to London in April as one of only 6 performers selected from the U.S. to perform in the London Burlesque Week 2010. A little bit naughty, a little bit nice, Miss Honeyscotch is wholly intoxicating! – verucahoneyscotch.com (Photo: Matt Bresler) WREN BRITTON is a jewelry and accessories designer who uses objects people have loved and forgotten to create new heirlooms for a lost generation. Britton also designs clothing created from materials ranging from fabric to paper, inspired by “New Wave Dreams of a Teenage Heaven.” On occasion, he creates window and interior displays wrought with whimsy and dark fantasy for such renowned boutiques as Anthropologie and ABC. His hands are never idle, and his work can often be seen and purchased at Dances of Vice. – purevile.com (Photo: Steven Rosen) MALVOYE the Mentalist was cast out of Wonderland by the Queen’s Court for his ill-fated predictions. Now, one night only at Dances of Vice, this fully automated antique fortune telling booth will be sharing his visions of the fut

ure. Each of Malvoye’s fortunes is individually crafted for the specific patron of the booth, using a melding of mysticism, astronomy, and other unknown devices. Caution: all may be foretold – not for the faint of heart. Throughout the evening the Malvoye booth will be issuing verbal fortunes under a seemingly random schedule which is only known to be linked with celestial movements. “A truly sublime reflecting pool, an expansive cathedral-like interior, brilliantly spotlit, the scenery is lush, [an] ever-growing cultural oasis.” -THE NEW YORK TIMES Galapagos Art Space 16 Main St, Brooklyn NYC