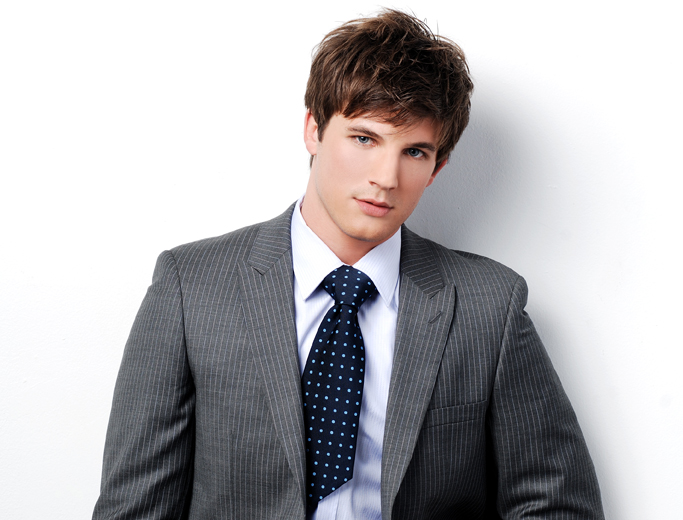 Matt Lanter, the breathtakingly handsome All-American southern gentleman can be seen in a tee shirt and jeans just about any Saturday. He loves his sports, sportswear, his NIKE custom-made kicks with “Matty Mack” (a childhood nickname) embroidered on the backs, and a baseball cap. As casual as he is during time to himself, he definitely loves to dress up, and with his boy next door charm and a casual, yet confident style, actor Matt Lanter is often sought out by fashion designers and labels. It seems that men want to be him and women want to have him.

Matt is currently shaking things up on the small screen after joining The CW’s hit show “90210”, playing the West Beverly high school bad boy Liam. While Matt’s character Liam has a simple style, Matt knows the importance of fashion in Hollywood. He uses fashion as a way to express himself at a red carpet of a movie premiere or magazine party– and unlike his character; he enjoys feeling fashionable and comments that he likes mixing colors and textures to accentuate his outfit’s sense of style.

Matt’s not just known for “90210”, he is also continuing his work on season two of the record-setting animated television series, “Star Wars: The Clone Wars”, currently airing on the Cartoon Network. Even hotter in the news, Matt can be seen in SUMMIT ENTERTAINMENT’S feature horror film “Sorority Row”, in theatres now, while he is also set to join Leighton Meester (“Gossip Girl”) in SONY SCREEN GEMS’ psychological thriller, “The Roommate” on screen in 2010.

We recently got a chance to speak with Matt to discuss his thoughts on fashion and style. Fashion, he says, is what you make it. For him, it has no rules—it’s about being comfortable in your own skin. What you wear has to make you feel great—that is what is most important, everything else comes second.

Runway Magazine: What does fashion mean to you?

Matt Lanter: I think fashion is an important way of self-expression, and can be done through a more subtle approach or by making a bold statement. Either way it says something about the individual. As an actor fashion is important to me because it allows me to step into different character’s worlds by dressing the part and expressing that character’s traits and attitude through their clothing.

RM: How would describe your personal “look” in three adjectives?

RM: Who are your favorite designers?

RM: What kind of style does your character Liam have on the show?

RM: Do you like the way they dress Liam or would you change it if you could? ML: It’s actually funny I joke around with our wardrobe department about how Liam has no color in his closet. But I do like how they dress Liam; I think it fits with his brooding personality nicely.

RM: Let’s have some fun. Please also name the 10 best-dressed women of 2009 in your opinion and why. ML: In no particular order the following women are very beautiful and they tend to radiate self-assurance and a certain sex appeal. I love women that are confident and put together, that’s the best I can do—I believe they all have a great fashion sense as well!