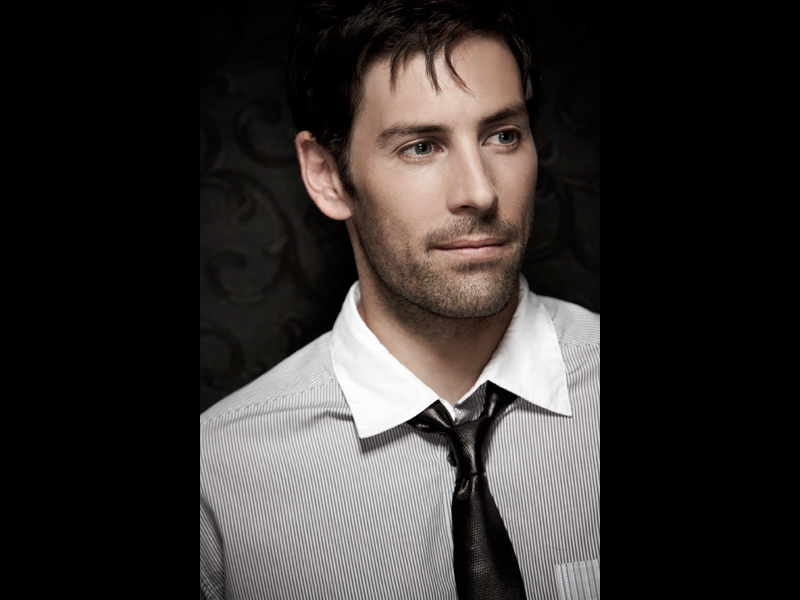 What is new with you?In addition to “Entourage”, I just finished shooting a role opposite Bruce Willis in “Surrogates”. It was amazing to be a part of the film. It does what I feel good science fiction does best – entertains, but simultaneously challenges the audience to think about current topics and philosophical issues by looking at their potential consequences through the prism of a futuristic world. I also just got back from France where I biked through the Loire Valley, working my way from little town to little town. The chateaus and towns I visited went back centuries, so it was almost like biking back in time. I wasn’t sure where I was going to stay each night, so part of what made the trip so beautiful – besides the unbelievable scenery of the French countryside – were the special interactions I had with the people who took me in along the way.

Who is your favorite fashion designer?Right now I’m wearing a lot of Hugo Boss. I like the colors, and I like the way the clothes are cut. They fit my body well.

What is most memorable moment in show business? Playing opposite Bruce Willis in “Surrogates” was a defining moment in my career. He’s someone I grew up watching, so as I worked with him I had to momentarily step back, take note, and sincerely appreciate the point I had reached. When you’re a kid and you’re in love with movies, Hollywood seems like a surreal, far-away world. If you had told the 10 year old me that was watching ‘Die Hard’ that I would one day be acting with Bruce Willis, I don’t know if I would have believed you.

When did you start acting?I started acting when I was about 11. I was obsessed with cinema. My parents were very supportive when I wanted to try to begin working professionally. They knew early on this was what I wanted to do.

Where did you learn to act?I never took any classes or studied with any acting coach in particular. I was just always in love with movies. I was engrossed with story-telling. I just developed a natural sense of the way you can tell stories.

Who is your favorite actor/actress and why?I get inspiration and influence from a multitude of people. I have always admired Gary Oldman. He morphs into each character he plays and is almost unrecognizable role to role. I really admire that. One of my favorite films of all time is “The Professional”. It has everything in it that I love about movies – moving drama, visual style, action, moments of comedy, richly drawn characters and relationships, and remarkable performances.

What are your favorite shoes? I like my Chucks a lot, and a good pair of black boots are indispensable.

What do you do to blow off steam? I’ve really gotten into surfing lately. It’s incredibly addicting. You start to crave being out there. There’s something almost magical about being in the water at 6am. It’s quiet, and there’s this unspoken recognition of that magic among everyone out there. I like physical outdoor activities. I love to bike the bike paths along the beach, enjoy hiking the canyons of LA. And I’m a pretty voracious reader.

Where is your favorite spot on Earth?I was in a place in the Loire Valley in France that was the most romantic place on earth. It was on the side of a steep hill overlooking the French countryside, a 15th century chateau, and the river. It was out of a storybook. It was unlike any place I’d ever been.

Have any pets?My parents have a dog that I kind of claim as my own. Her name is Bailey and she’s a Cockapoo. As I’m sure every dog owner says about their own dog, I’m convinced she is the smartest, sweetest dog on earth.

Where do you reside most of the time?I mostly stay around LA where I work. LA is indeed a great city, and I feel sometimes gets a bum wrap. It’s not centralized in the way most big cities are, which definitely has it’s downside, but it really has everything – great food, space, diverse people, culture and nightlife, the beaches and mountains, amazing weather. But I do love to travel, and do it a lot. I’ve spent a bit of time recently in London, New York, and Paris.

Are you a day or night person?Is it a cop out to say both? I like getting up super early and getting a jump on the day, but I simultaneously love to be up late when I have time to myself.

What do you watch on TV?I am a big fan of “Curb Your Enthusiasm”. Larry David has this amazing way of highlighting all the awkward moments in everyday interactions, always saying that thing in certain situations you want to say, but can’t. I also love “Flight of the Concords” and “Mad Men”.

Who does your wardrobe for “Entourage”?Our costume designer, Amy Westcott. She is a phenomenal designer, one of the absolute best in the business. She dresses me better than I could ever dress myself!