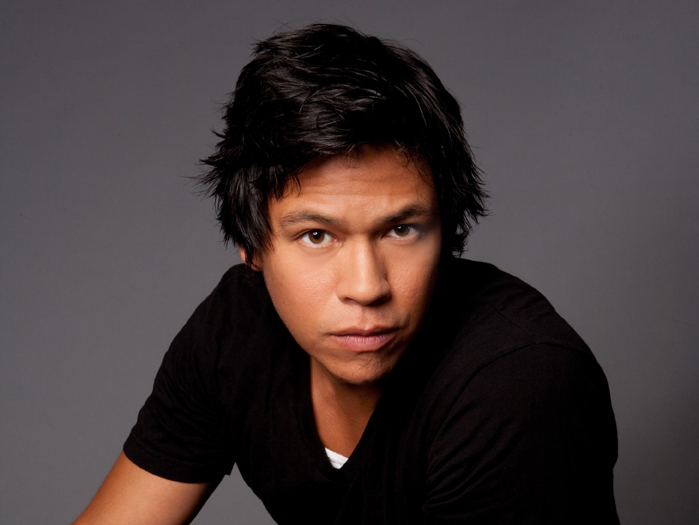 Emerging “New Moon” actor Chaske Spencer knows what works when it comes to his personal style. This Montana native, born into the Lakota Sioux tribe, goes for a rock n’ roll look combined with a vintage feel. While he likes to put on a nice suit from time to time, he’s a big fan of comfort, and can often be seen in jeans, a t-shirt, and a pair of rugged boots. His style can often be compared to that of Colin Farrell or Johnny Depp, but there is much more to Chaske than his bad boy fashion sense.

After moving to New York City, Chaske was cast in his very first off-Broadway play, “Dracula”, playing the title role. From there he did a number of New York Theatre pieces, and was fortunate enough to be discovered by television/film casting director Rene Haynes. Rene cast him in his first feature “Skins” as well as the lead in “Dreamkeeper” and Steven Speilberg’s “Into The West”. Rene also cast him in his latest and most buzzworthy role to date, playing Sam Uley; in the popular Summit Entertainment “Twilight” film series sequels: “New Moon” and “Eclipse”. “New Moon” is set to premiere on November 20, 2009.

With experience both on stage and on screen, Chaske’s credibility as a quality actor stands strong. He is passionate about making a difference with all people in the area of reducing poverty and creating sustainable communities. In fact, he is engaged in several projects to that end. Partnered with his manager Josselyne and veteran producer Ted Kurdyla, his production company “Urban Dream,” is in development on a feature-length documentary and feature film called “The Block”. Additionally, Chaske expects to soon be starring in “All My Relations”- a role created specifically for him. This is a contemporary Native project that has been developed for television by producers Rene Haynes and Susan England.

We got a chance to sit down with Chaske and get his thoughts on style and fashion.

Runway Magazine: Who are some of your favorite designers?

Chaske Spencer: John Varvatos is my all time favorite. I also like Kenneth Cole, Chuck Taylor, and Diesel.

RM: On a night out at the club with the guys, what can you be seen wearing?

CS: Diesel Jeans, vintage shirt- button up or a tee. I like rugged boots or shoes.

RM: How would you describe your day-to-day style?

CS: Depends on my mood. If it’s a relaxed day, I could be in a pair of Levi’s, Chuck Taylor’s, and an old beat up t shirt. I like comfort.

RM: Has your fashion sense changed over the years?

CS: No, not really. I like a gypsy style to my clothes. Don’t get me wrong. I like a nice suite from time to time. But, nothing beats a pair of lived in jeans, white T-shirt and a pair of cowboy boots. I like the “dirt road in the middle of nowhere look” (laughs).