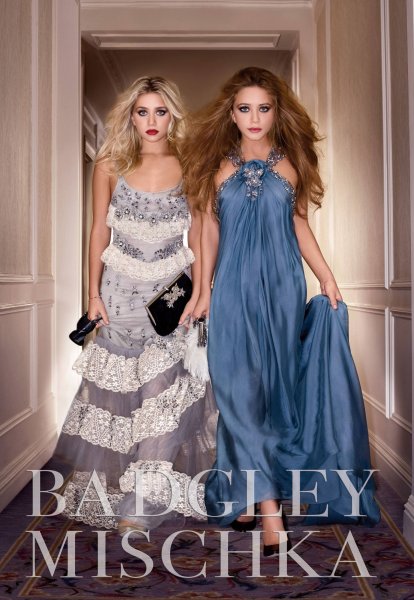 Designers Mark Badgley and James Mischka are known by Runway to be among the “Top 10 American designers” creating ultra luxurious red carpet favorites. It all started in 1988 where Mark and James used the label “Badgley Mischka” to launch their line of women’s eveningwear. Badgley Mischka’s fashion line caught the immediate attention of prominent retailers around the world with their refreshing glamor in which seemed to cater to those of a younger and more modern couture customer, without forsaking women of any age. Both tall and movie star handsome, Badgley and Mischka together personally and professionally have proved to be a worldwide success. It seems as though Badgley and Mischka were both born with a strong passion for fashion. Badgley was born in East St. Louis, Missouri, in 1961, and grew up along side of his twin sister O’Hara in a suburb called Belleville. The future designer claimed to have sketched evening clothes since he was a small child. “I remember drawing women and clothes when I could barely hold a crayon,” he told Min in People. Mischka was a native of California, the eldest of three boys and born just before Christmas of 1960. The family moved from the beach town of Malibu to New Jersey when he was 12. “In Malibu we would make love beads and dye our clothes, “he said in the People interview with Min. As their mainstream look refers back to the glamorous Hollywood of the forties’ the signature style is simple, sleek and thoroughly elegant. “One zip and you’re glamorous” says Badgley. We like to keep things effortless. It’s fabulous if you can spend hours getting ready, but a woman should also be able to bring a dress to work and change there for an evening out.” The famous red-carpet evening wear holds a tradition of rhinestones, cleavage, sweeping trains, but made modern with lighter fabrics and a reduced amount of structure. This allows for an easier and more comfortable wear, yet still holding an amazing dazzle to the look. Mark Badgley and James Mischka said that “the golden age of ocean travel“ inspired their Spring 2009 collection, which they showed on Friday, Sept.12, the closing day of New York fashion week. Sitting in the front row were actresses Heather Graham and Joan Allen, joined with swimmer Amanda Beard and gymnast Nastia Luikin, along with newlyweds Jason Biggs and Jenny Mollen.The designers kept a goal of keeping things light using only featherweight fabrics such as silk gazars with bead and ribbon embellishments, eyelet lace and shredded chiffon, tallying an extra dimension to the visual stimulation, giving a definitive break from earlier seasons. “Each gown only weighs two or three ounces. It definitely makes them much easier to wear,” said Badgley. The change was surly welcomed as it also ensured that the few sparkly gowns, in which they did show, really stood out to the crowd. It’s been 20 years since Mark Badgley and James Mischka joined together. Their everlasting designs have appealed to a wide variety of fashionable women, including celebrities such as Madonna, Catherine Zeta-Jones, Jennifer Lopez, Sharon Stone, Jennifer Garner, Julia Roberts, Kate Winslet, Sarah Jessica Parker and Ashley Judd. The consistent integrity of their collections has pushed them to the forefront of fashion. Badgley Mischka is sold in the most prominent stores around the world including Bargdorf Goodman, Neiman Marcus, Nordstrom and Saks Fifth Avenue. Those that are seen wearing Badgley Mischka are representing a look of true elegance and can, without a doubt, walk with their head high knowing that they look glamorous.