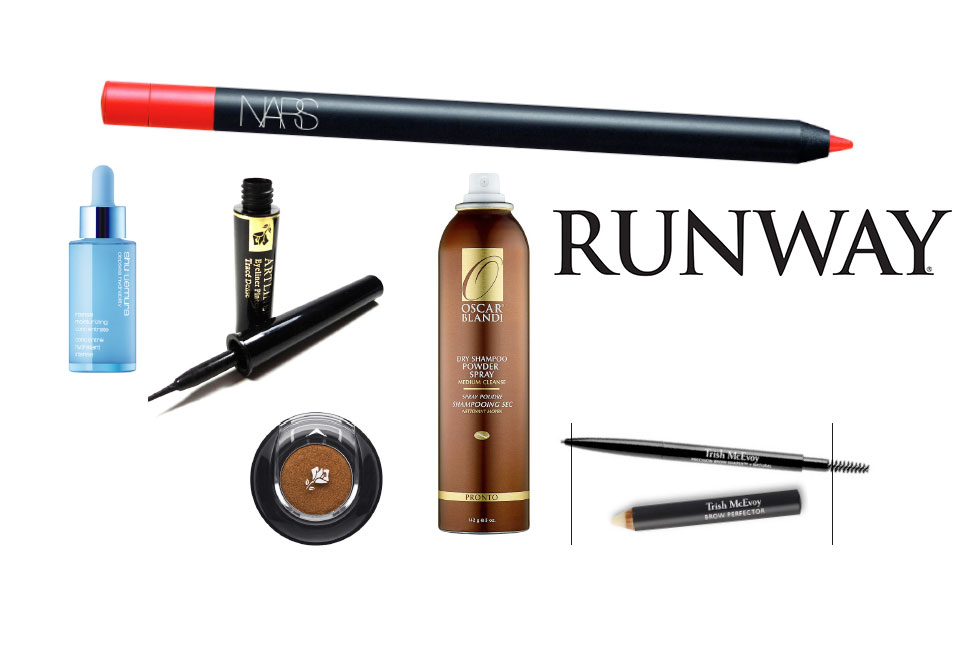 Honoring David Bowie groupies, bare naked ladies, golden goddesses and an ode to Elizabeth Taylor’s violet eyes. It was all part of the eclectic spirit that emanated from New York to Paris for the recent Spring 2015 collections. The models on the catwalk gave good face and great hair. The season’s best makeup looks took their cue with a sense of defiance and unbridled ease. And while Marc Jacobs sent his models to the runway in shaggy black bobs (again) and bare faced, there were still plenty of whimsical touches. Gilded golden touches on the eyes, a random scribbling from Louis Vuitton and lip colors that could have leapt off the canvas of a Warhol painting, the message states that it’s alright if your makeup is a little imperfect.

Whether it’s the aforementioned inky scribblings at Louis Vuitton, Bardot’s bedroom eyes at Diane von Furstenberg or gold dust at Anna Sui, bold black liner or sparkling shadow is the perfect medium to display the graphic looks of the season. Get the look with a bold black felt tip pen like Lancome’s Artliner in Noir, the felt tip allows for a line as fine as Marchesa’s look or as thick as Saint Laurent’s. Smooth Hold Sensational Effects eye shadow in Pose, when applied to the inner corners and the middle of the top and bottom lash lines, is a look that you can’t get wrong.

Here, some of the top beauty trends you will be wearing come Spring 2015.

The hairstyles of the season took on the same sartorial sprit as the eccentric makeup looks with animalistic streaks, shell shaped up-do’s, boyish Evangelista-esque pixie cuts and slightly unkempt beachy braids. The Mulleavy sisters sent their models to the runway with zebra print hair extensions fastened by Odile Gilbert. “They took two days to hand paint and stamp”, Gilbert said backstage. Though we saw a selection of low maintenance styles, too. The loose tousled braids at Michael Kors were achieved by using dry shampoo and pulling strands from the front and from the braid for a look similar to how you’d style your hair after spending an afternoon poolside at the Soho house. To get the look use Oscar Blandi’s Pronto Dry Shampoo Powder Spray. Use just enough to cloud your vanity and finish with a curling iron.

This season, the best investment you can make is an appointment with your esthetician. A designer’s and makeup artist’s penchant for freshly washed, well moisturized skin takes precedent over heavy makeup application. To get the look opt for a rich moisturizer like Shu Uemura’s Deepsea Hydrability Intense moisturizing Concentrate. A little bit goes a long way, just a little dab will make your face feel hydrated all day.