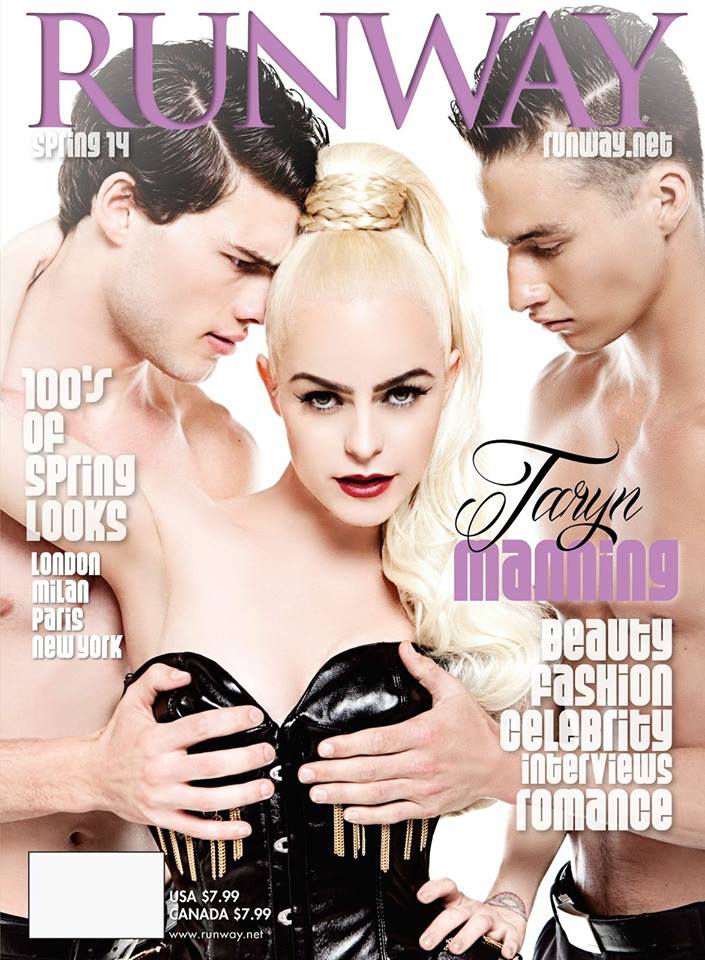 Actress, singer, and celebrity DJ Taryn Manning is a powerful force to be reckoned with this year. Since making her film debut in the romantic drama Crazy/Beautiful at the start of the new millennium, Manning has acquired an impressive resume. Credits include 8 Mile, Hustle & Flow, her work in the current award winning comedy-drama TV series Orange is the New Black and an abundant list of projects slated to release this year.

Having appeared in advertising campaigns for Juicy Couture and Frankie B, Manning is an avid follower and fan of fashion. We talk to her about the many hats she wears, her up-coming endeavors, how she keeps it all balanced and the deep passion she has for music.

In Orange is the New Black you play Tiffany ‘Pennsatucky’ Doggett, a character who touches on controversial topics such as abortion and religion. What has been the most challenging aspect, and the most rewarding aspect, of playing this role?

She does touch on those subjects, and it is the ultimate contradiction. She is the most non-religious, religious person, you know? Me and my character are very, very different, but that is what makes it fun. My close group of friends told me when they watch the show there is no trace of Taryn, which is so cool. We are alike in the sense that she believes in justice, which I do too. So, there are ways I tap into her, but she is so disturbingly different from me and when I’m in character as her, I am lost. I’m gone.

With the show being based on darker subject matter, tell us what set life is like for the cast off-screen? What do you do for fun?

All the girls have branched off and found each other and who they are close with. I’m not sure what everyone does together, there are a lot of cast members, I know a couple of girls took a trip to Puerto Rico together. Me and Emma Myles hang out a lot and have a lot of fun together. The characters who work together often tend to gravitate towards one another, just naturally. We have a really good time, we have dinner parties. It is all very supportive.

With all of your recent acting success, working on projects such as Hawaii 5-0, Sons Of Anarchy, Orange Is The New Black and an abundance of films, what do you do to work in down time?

I work on music. I’m always into something, whether it be working on a clothing line or working on music. Music is my passion, I have a lot of accomplishments in music that people may not know about.

If I have a shorter day on set, and wrap earlier than normal, I will go into the studio. When you work in music, a lot of magic goes down late at night. Once I’m onto something with music, there is more freedom. It’s not like on set when there are schedules and timelines.

Here at Runway we adore fashion, and we heard you do too. Who are favorite designers? What is your typical weekend wear?

I’ve always been a Balenciaga fan. They have so many timeless pieces. I wear a lot of their pieces, a lot of blazers, that I have had since the 90’s. Very Janet Jackson inspired. I also love the look of Yves St Laurent suede knee boots and a long trench coat. I also like Rag & Bone and Wild Fox, something more casual, like their cashmere and knit. And Juicy Couture and Charlotte Ronson, who is a good friend, there are just so many.

Who are your fashion icons and how does their style influence your personal style?

I wouldn’t say anyone inspires how I design, but I love Kate Moss, Nicole Richie and Rachel Zoe. I really like Rachel Zoe because her collection has a vintage appeal. I love high-end vintage, which is very expensive, and to be honest with you, I grew up without a lot of money and I had to make the best of what I had. I did a lot of shopping at thrift stores, wearing Esprit and Guess and reworking pieces.

Explain the feel and inspiration behind the clothing you design?

For my clothing line, Born Uniqorn, the inspiration was about being unique. The initials are B.U. and it truly is about being yourself. I did a lot of touring in Japan during my early Boomkat days, which was my music group with my brother, and I was inspired by the fashions in Osaka and the colors.

What is your favorite trend that is happening now and what is one accessory you cannot live without this season?

I am a hat girl. I love hats and I love sunglasses. I like that they look great and they can cover you up when you’re not wearing make-up and if I want to run in somewhere and not be bothered, it helps put up a barrier. As far as trends, I’m loving the one-pieces that are out. I love them because of my ballet background, and I like the side cut-outs and the low backs I’m seeing on them now.

To celebrate Runway’s music issue, we would love to talk about your musical background and what gets you moving. Who are listening to right now?

I grew up in an all musical family. My father was a musician, so was my brother, and there is just a long line of music in my heritage. I DJ too, so I listen to so many types of music it’s hard to just rattle off music when I genuinely listen to so much stuff every day.

Who has been the biggest influence to you in your own music?

I hear often that I have a very soulful tone and that it is obvious I grew up listening to R&B and Motown. So I take that influence and mix it in with a bit of a rocker chick and I think you have me. Like a mix between Blondie & Macy Gray, or so I’ve heard.

You have made appearances in music videos such as will.i.am’s “Yes We Can” and Butch Walker’s “The Weight of Her”. Have you worked on additional music video collaborations or have any planned for the future?

Yes I’ve been in several music videos. I also worked with Train, Zedd and Nickelback.

Having worked some of the hottest parties in New York and L.A., you have recently been labeled one of “the hottest names in the DJ game”, how does DJing compare to you performing your own music live? Do you have a preference?

I don’t know about one of the hottest names in the game but again I like to play music, so anyway I can get my hands on it!

It has been mentioned that you are experienced in kickboxing, Tae Bo, dance, yoga and karate. Do you stay in shape by mixing up activities you enjoy, or do you have a specific regimen that you do to stay healthy?

Mixing them all up is how I stay in shape, I feel like I am always working out. People say I am so small, but I am really strong. I feel like my whole life is a workout. When I can just lay down and chill I feel like that is such a gift.

Lastly, you get to play with your looks for many roles. We have seen you as a blonde, a brunette and a red head and we have to know, what has been your favorite?