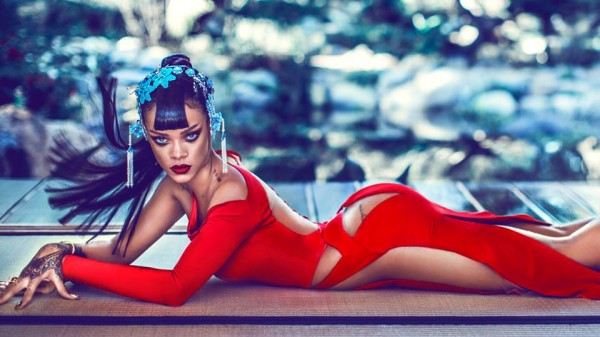 When the hottest musicians and fashion designers collaborate, the result is nothing short of a marriage made in advertising heaven. The latest example of this creative marketing strategy is the appearance of today’s biggest music icons in spring-summer 2015 fashion campaigns for some of the world’s most couture fashion designers.

“Music and fashion are so closely intertwined,” said Tess Taylor, president of the National Association of Record Industry Professionals. “I think pairing fashion with music is a win-win — if you have the right chemistry.”

This spring, that winning combination comes through in marketing campaigns featuring chart-toppers like Nicki Minaj wearing glamorous retro-inspired couture by Roberto Cavalli. The Italian designer chose the hip-hop hottie to demonstrate the modern femininity of a sensual woman that is unafraid to show her curves, he has been quoted saying.

Grammy-award winner Madonna unveils the latest collection from Versace after a 10-year hiatus. It is the fourth time the 56-year old Queen of Pop has been the face of the Italian designer – without airbrushing of her flawless arms or bare midriff that appears prominently in the slinky and stylish designs.

“By a musical artist promoting a fashion brand, that is incredible brand integration for the musicians and the fashion brand – so it’s a win-win across the board,” said Mary Hall Ross, president of The Ross Group, an Los Angeles-based luxury and lifestyle branding agency.

“The musical artist has such a large fan base that the followers of that music want to know what he drives, what he eats,” she said. “They want to wear what the musician wears and buy into what the musician endorses and promotes.”

This year, the use of musicians in fashion print and media advertising has hit a noticeable high, but is not a new development in marketing, the experts said. The trend of pairing music with product advertising has been steadily evolving over the last decade as an alternative means of marketing in the shadow of the internet, Taylor of NARIP said. Other mega music stars putting their face on a fashion brand include newcomer Iggy Azalea’s debuting Forever 21’s latest creations, while Jennifer Lopez sports the latest workout wear by fitness designer BodyLab.

Justin Bieber bears more than his boyish smile in the new ads for Calvin Klein, while his on-again, off-again girlfriend Selena Gomez models the latest in active wear and footwear by Adidas. It continues with rap mogul Kanye West and his model/reality-star wife Kim Kardashian West pairing up with fashion house Balmain to showcase the French haute couture’s spring-summer collection, while Solange Knowles, is the face of the new ultra-contemporary styles by Parisian fashion brand ElevenParis.

The music industry is a force that major fashion designers want to reckon with due to its long history and strong fan base, according to Taylor, who is currently advising the designers of a new fashion line with selecting “hip, new, sexy, and talented” artists who can boost exposure. The music and fashion union has a lot to do with imagery, noted Danielle Walker, a public relations coordinator at Orlando-based Chatter Buzz.

“When you have a celebrity as the face of your brand, customers who are not that fashion-forward become more familiar with it and it becomes something they relate to,” she said.  Chatter Buzz is a digital marketing agency that delivers creative branding, public relations consulting, and advertising for a wide range of industries, including the fashion industry.

In the case of fashion design, the musician is the connection that helps fans to develop an admiration for the labels because of their affection for the artist.

“Having a celebrity helps the consumer identify more with the brand,” Walker added. This was the case last year when R&B icon Beyoncé was the face of the H&M retail campaign. The imagery works both ways, however, and the musicians often improve their own reputation and appearance through their affiliation with the international runway designers, Walker said.  “A big part of a celebrity is how they look and how they present themselves,” she said.

This is true for new celebrities who may need the clothing line and brand to create their own identity, and the established ones who want their style to somehow be incorporated into that clothing line or fashion campaign, Walker said.

“If their style is such an important factor of how they are branded, it’s easy to tie them into the fashion and have the celebrity as the brand ambassador, because they both correlate,” Walker added.

Taylor said the collaboration of music and fashion can exist in a variety of ways – everything from partnering a great fashion brand with an independent artist or pairing an established artist with a new fashion line. It can also involve music icons like Madonna lending her name to a small, fledgling fashion designer to boost the line’s image, or partnering blockbusters like Calvin Klein with Justin Bieber.

“Ten to 15 years ago, a lot of artists wouldn’t touch a commercial with a 10-foot pole – a lot of them thought it was considered selling out to place their music in an ad,” Taylor explained. “Today, they can’t get into the ad agencies fast enough because they see how much money the brand campaigns can make and how pairing music with a product can enhance their careers, put them in front of more people, and gain new fans.”

Taylor recalled Led Zeppelin as one of the first to capitalize on product branding when the trend picked up speed in recent years. The legendary British heavy metal band’s song “Rock and Roll” made advertising history in 2002 when it was heard as the theme song behind the “Breakthrough” ad campaign for Cadillac. The luxury car company’s sales soared because of it, and Led Zeppelin was introduced to a new generation,” she explained. Ross agreed that celebrities and musicians have jumped on the product branding bandwagon in recent years as the trend has become more popular.

“The fashion brands realize that a lot of their target base is plugged into the music industry and artists, so it’s a strong collaboration for both,” Ross said.  All that branding can mean a big payday for both parties, she noted. “The brand carefully researches who they’re target audience is, and the artist also researches the brand, so it’s a good fit for them and they are comfortable being a spokesman for the brand,” Ross said.  “It’s very much a strong marketing campaign and I see it increasing in the future,” she added.