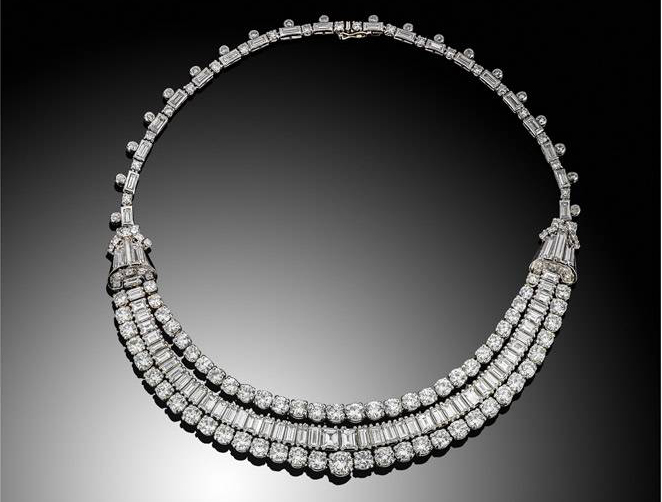 A stunning 1950s white diamond necklace being auctioned at Woolley and Wallis stands out in a sea of coloured gems, says Joanna Hardy

With all the recent talk about coloured gemstones it takes quite something for a jewel set entirely with white diamonds to stand out from the crowd. This 1950s necklace, auctioned in the Woolley and Wallis jewellery sale on April 30th has the credentials to do just that.

The necklace initially caught my eye because of its three tiers of brilliant-cut and step-cut diamonds, beautifully graduated with a signature of individuality whereby some stones are slightly wider than others, which is a hallmark of this period. Today’s diamond necklaces are set with stones that all perfectly match in size, colour and graduation, but what many modern diamond jewels lack is character. This necklace has the distinction and style of a bygone era.

After the austerity of the war years, jewellery and fashion changed dramatically. The flat, geometric forms of the Art Deco period gave way to a more feminine and frivolous look. Massive gold jewels were replaced with designs of a more naturalistic inspiration: voluminous, three-dimensional volutes, scrolled leaves and bows of elaborately interlaced ribbons.

Diamonds, which had not been used in any quantities for the last decade, became the preferred gemstone and, as frequently happens after a war, there was a desire to restore the values of the pre-conflict years. This was reflected in jewellery – instead of innovating, designers would hark back to the shapes and models that were last popular, as is displayed in this necklace where the 1950s design mirrors the late 1930s.

During the economic boom which followed the war, jewellery was a perfect vehicle with which to showcase one’s newly-acquired wealth. Lightness and movement were key ingredients of 1950s jewels, replacing the solid metallic forms of the 1940s. There was a return to differentiating between jewels for day wear and ornaments for evening wear, which was the ideal platform to show off opulent parures set in white metal (platinum, white gold or sometimes palladium) and lavished with white diamonds.

This necklace has been made with wonderful attention to detail; seen where the three diamond strands converge into a three-dimensional scroll motif that is beautifully accentuated with long tapered baguette-cut diamonds, the size of which would be very difficult to find today.

It is this attention to detail along with the great craftsmanship that makes this necklace such a delight to wear. As it sits beautifully around the neck, it’s clear that this is a jewel whose main purpose is to enhance the beauty of a woman.