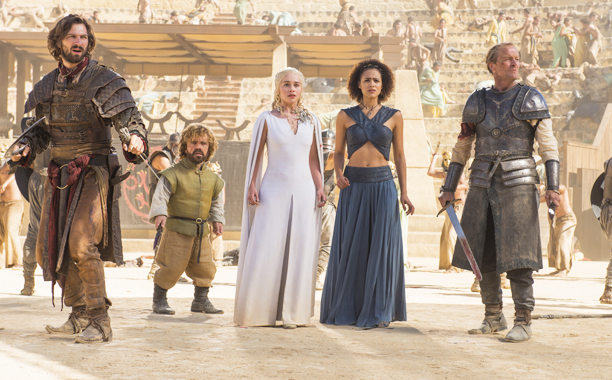 Game of Thrones is the king of the Emmys.

Not only did Thrones snap its drama category runner-up streak, but the series picked up Emmys for outstanding supporting actor (Peter Dinklage), writing (David Benioff and Dan Weiss) and direction (David Nutter) on Sunday night. With a total of 12 Emmys this year (including eight won at the previously held Creative Arts Emmys), Thrones broke a major record by surpassing The West Wing to take home more TV Academy awards in a single year than any other show. Thrones easily beat the White House drama’s 2000 record of nine wins in one year.

Nominated for outstanding drama for each of its five seasons, Thrones lost the last two years to AMC’s Breaking Bad. This year, many bet AMC’s other critical darling and four-time previous winner Mad Men would reclaim the throne for its final season. Yet Thrones managed its first drama series win after racking up more nominations than any program, and only lost one major category for which it was nominated (Lena Headey and Emilia Clarke each lost best supporting actress to Uzo Aduba for Netflix’s Orange Is the New Black). Previously, the only top category won by the show was Dinklage’s 2011 supporting actor victory for the show’s first season.

The Thrones team’s speeches were low-key. Accepting the award for outstanding drama series, Benioff and Weiss thanked the show’s cast and crew and HBO for taking a chance on them and “believing in dragons.” Dinklage said he didn’t have anything prepared (and genuinely seemed like it), and gave a shout-out to the other nominees — particularly Better Call Saul’s Jonathan Banks, who was the odds-on favorite to win.

Backstage, the showrunners were asked by reporters why Thronesfinally won this year. “We knew that there would be some resistance at first to a show set in this genre … we knew it would take a while,” Benioff said. “But we’d hoped if we did our jobs and if we were fortunate enough to be blessed with the cast and crew that we were blessed with … and if we got lucky, that we’d get there eventually.”

The victory must be particularly sweet for the Thrones team given the controversy surrounding season 5. Thrones has raised eyebrows and generated pundit protest every year for its brutal depiction of a world inspired by Medieval Europe, but complaints reached a fever pitch during season 5 after a young likable character was raped and another was burned alive (a U.S. senator famously declared she was quitting Game of Thrones).

But showrunners David Benioff and Dan Weiss have remained stalwart throughout the saga that they’re going to remain true to creator George R.R. Martin’s world and not adjust their narrative based on fandom reactions. The producers also declined to make the Hollywood media rounds during Emmy voting season to drum up support for their show, as is customary for nominated producers, and instead remained focused on making season 6. So despite drawing more controversy than any program this year and refusing to play the “game of Emmys” with the press, Thrones still took the top prize, and on their own terms.

Fellow showrunner Damon Lindelof, who produces HBO’s The Leftovers, was among those who made a compelling case for GoT to take the top prize. “As someone who makes television, I watch that show and I do not know how they do it,” Lindelof told EW in a discussion of the show’s fifth season. “When I was watching [episode 8] “Hardhome” this season, I was just like, “That’s one of the most excellent hours of television I’ve ever seen. It’s excellent for different reasons than ‘The Suitcase’ episode of Mad Men is excellent, but it’s just amazing.”

Here is a complete list of 2015 Emmys won by GoT this year: