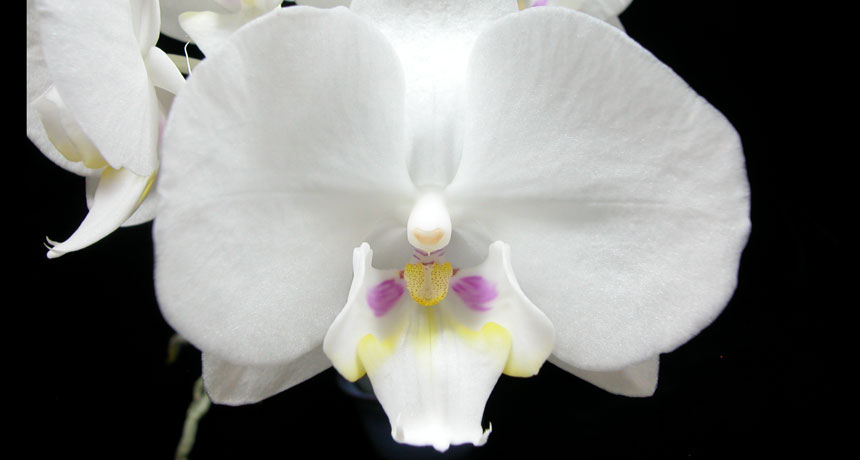 The shapes of the petals and lip of this Phalaenopsis orchid are governed by competition between two different protein complexes, a new study finds.

One of the main characteristics that make orchids so attractive to us and to pollinators is shape. Unlike a flower such as a daisy, orchids don’t have a uniform pattern of petals and sepals. Instead, one of the orchid flower petals has been modified into a lip that can serve as a landing zone for, say, a bee.

The formation of the lip and the standard petals, a new study finds, is governed by two competing sets of proteins. And when researchers modified those proteins, they changed an orchid’s shape. Hsing-Fun Hsu of National Chung Hsing University in Taichung, Taiwan, and colleagues report their findings April 27 inNature Plants.

In plants, flower development is controlled by a group of genes called MADS-box. About 60 million years ago in orchid ancestors, some of these MADS-box genes got duplicated, and those new versions of the genes changed in ways that gave them new functions. In studying those genes, Hsu and colleagues found two groups of proteins, the “L” complex and the “SP” complex. How much of each protein complex a flower makes determines whether the lip or the standard petals are dominant.

A mutant version of one orchid called Oncidium Gower Ramsey has petals that are all shaped like lips, and it expresses only the L proteins, the researchers found. In other species, the team found that the balance between lip and petal was reflected in the expression of the two protein complexes. The scientists then used a virus to manipulate the expression of the L complex in Oncidium and Phalaenopsis orchids, which converted lips into standard petals.

“This experiment nicely shows that during orchid evolution two copies of duplicated developmental genes acquired a new function by specifically promoting lip identity,” Barbara Gravendeel and Anita Dirks-Mulder of the University of Applied Sciences Leiden in the Netherlands, write in an accompanying commentary in Nature Plants.

Orchids are somewhat of an evolutionary oddity in that they manage to lure in pollinators without offering some kind of food reward in return. Usually pollinators figure out pretty quickly that there’s no point in visiting flowers that don’t provide them with some benefit. But there’s something about orchids that keeps luring them in. Understanding the genes and proteins that underlie the shape and allure of orchids could help scientists figure out how these plants manage to attract bees, flies, moths, mantises, butterflies, gnats and bats — and us.