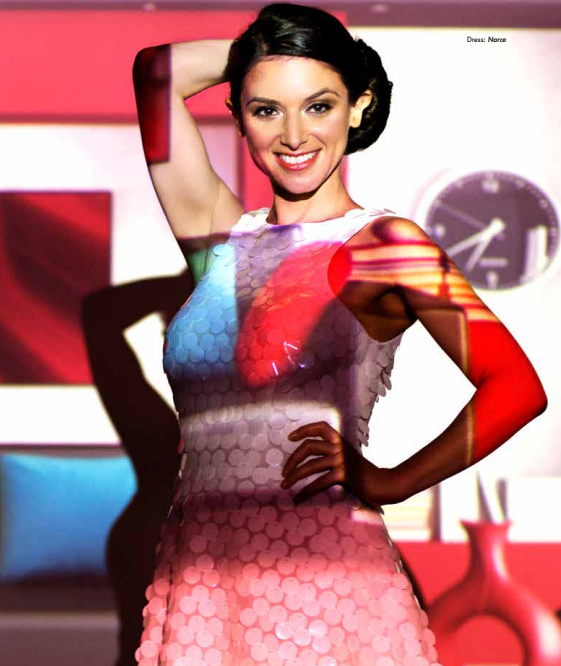 You’ve appeared in many popular television shows and movies. You made a huge impact as Nadia in Lost and as Kebi in The Twilight Saga: Breaking Dawn- Part II. This year you have a few new projects and recently appeared in 2 Broke Girls. What has been your most exciting role to date?

All of the projects I’ve been involved with have been exciting in their own way. I’d have to say Nadia on Lost. Coming into such a successful show right at the ground floor in season one, and being a part of the fabric and mythology of a bonafide cultural phenomenon, was a dream, and I am honored and grateful to have been a part of it.

When you get a new script, what is the first thing you do to start preparing?

I take a look at the arc of my character’s experience within the story then go into the emotional reality that would play into that journey; the emotional life, the character traits, like their strengths and weaknesses, with as little judgment as possible. To play her I have to be living behind her eyes. You can’t be subtly “commenting” on your performance or else it becomes inherently false and the audience can see the acting. You’re never actually living it.

You wrote and produced Clever Girl last year. Do you think your experience as an actor gives you unique insight into writing? What about vice versa?

Sure. It’s fun to bring someone else’s words and story to life because you feel like an instrument in an orchestra. Bringing your own unique translation and nuance to the story is its own kind of art, but when your words and the plot are well written, it is so much easier to do better work. Actors are always grateful for good writing. It’s much harder to bring bad dialogue and an implausible storyline to life. So when I write, I aspire to write not only compelling stories, but also the kind of dialogue that actors can dig into and tell a story that they’re excited to play.

Do you think you’ll make the switch from acting to writing?

I don’t think I’ll ever exclusively do one or the other. I love creating in general, so I aspire to have a hand in all of it.

When you decided to start acting, did everything seem to fall in place over time, or was there an “aha” moment when you felt like you really made it?

I don’t think that moment ever really happens. I’m speaking from my own perspective of course, but I think that’s a fair statement to make. I think there are plenty of surreal moments where you look around and can’t believe where you’re standing or whom you’re working with, but as humans we tend to acclimate to our realities, no matter what they are, so that they become “normal” after a while. “Making it” is such a subjective concept and the bar is always getting higher, so I don’t know if we ever feel we’ve “made it.” Even Oscar night comes to an end, and then everyone is on to the next year.

What parts of acting are your favorite and least favorite?

I love the actual moment of acting opposite someone really good, whether it’s stage or film. When you are in a moment with someone it can be a transcendent experience. Those moments can be rare, especially in film, because film is done in such self conscious, slow, small steps (alternating coverage, setting up shots, getting your makeup and hair touched up). Don’t get me wrong, I love film as its own art form, but you never really have lift off as you do with stage, at least not in my experience. But your performance can be much more nuanced and intimate in a way that wouldn’t read on stage. My least favorite part would probably be auditioning, which can be rough. Often to get into the head of a character, you get attached to her, and it’s your world, then you show up and there is a room full of girls and it’s hard not to compare yourself to them and say “aw man, she’d be perfect.” But one thing I will say is that it’s great practice in maintaining your focus. You can let yourself get thrown or you can choose to have more fun with it.

You’ve been involved in some charity events, like Cancer Gets Lost. Tell us a little about that.

Cancer Gets Lost is a non-profit organization founded by my friends (and Lost fans), Jo Garfein and Jared Wong, to raise money for cancer support charities through live events and auctions featuring rare and autographed pop culture memorabilia. I was a guest on their live charity webcast in 2012, which raised money for the National Brain Tumor Society, and am always happy to attend their events when I can. They are hosting an online charity auction this September, with 100% of the proceeds benefiting the American Cancer Society. I hope to join them at LOST 2014 as well, which is the official fan gathering in Oahu in September – celebrating the 10 year anniversary of the show’s debut. For more information fans can visit cancergetslost.org.

Do you have any morning rituals or a must-have meal to get your day started?

When I wake up I try to have a few moments of silence to get centered and set some good intentions for the day. I also have to go to the gym. I’m not a diet and fitness fanatic, I eat a lot and I love beer, but if I don’t sweat first thing I feel gross. It’s like taking a shower from the inside out.

Oh man, that’s so not my strongest point. I am a jeans and tank top kind of girl. Then I’ll throw a cool knit wrap over it or if I’m feeling crazy, a hat or chunky necklace. I love anything that’s comfortable, of good quality, and flattering. I also love girly dresses. I’m so easy.

What projects can we look out for this year?

I just finished shooting a pilot that I also wrote and produced, called Snow. It’s a modern day urban retelling of Snow White and The Seven Dwarves. That’s all I’ll say for now, but it’s twisted, dark and funny. Like my mind.