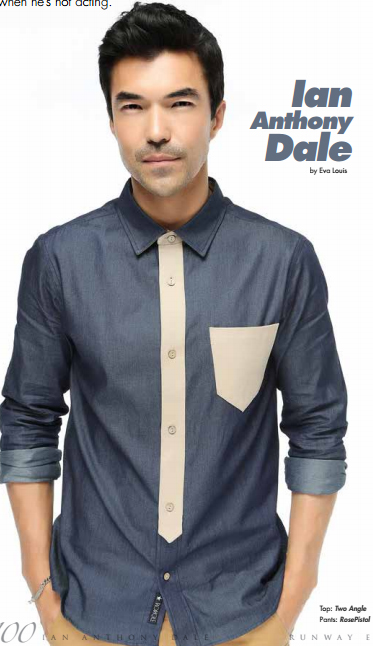 Crime, drama, and comedy are heavily reflected in your past film and TV work. What is your favorite genre to be cast in and why?

I would love to do more comedy. I think it would be extremely satisfying to make people laugh for a living. I tend to play more serious characters and rarely am I considered for comedy roles, but I know opportunities will eventually come. Look at Jon Hamm’s career. It took him twenty years establishing himself as a serious dramatic actor before he got to show off his comedy chops. Seemingly overnight, Hamm went from his star-making role as the brooding Don Draper on Mad Men to killing it in 30 Rock, SNL, and Bridesmaids. As they say, it’s all in the timing.

You have an impressive filmography. What has been one of your favorite projects from your long list of credits?

Of the many great experiences I have had throughout my career, one that really stands out for me is when I got to work opposite Jessica Lange in American Horror Story. The two of us had to shoot a scene that involved some rather heavy [kissing]. The script described our characters as “hungry for each other,” so you can imagine my anticipation leading up to the scene. Obviously, I was a little nervous, I mean, we’re talking Jessica Lange here! I wanted to service the scene, but more importantly, I wanted to make sure I remained respectful to Jessica. So during our rehearsal I approached Jessica and in my best attempt not to be awkward said, “Would you like to discuss some ground rules? I just want to make sure that I don’t do anything that might make you uncomfortable.” She looked at me with a smile that was both playful and discerning and said, “Let’s just shoot it.” Needless to say, what followed was one of the most memorable experiences of my career. Jessica is the epitome of class and professionalism. I am so lucky to have worked with her.

What drew you in to be part of this latest work, Murder In The First on TNT?

I was drawn to the opportunity to work with Steven Bochco, and I was intrigued by the idea of working for a network that can take greater creative risks with its programming. Steven has been one of the most influential contributors to the television landscape over the past 45 years. I can’t think of a better person to learn from.

We love a guy that can work with his hands, and we know you build furniture. Are any of the furniture pieces that you’ve built on display or available to see? Or is it private collection only?

The majority of furniture projects I have worked on in the last few years have been for my own private collection. Very rarely do I document my work publicly. Perhaps I will tweet out a few pictures of my work. I may be giving away some of my work in the upcoming months as I move into my new house. I have several custom pieces that I built specifically for my Hollywood apartment over the last eight years that just don’t work stylistically in the new home. Keep an eye out on Twitter. Maybe I’ll organize a giveaway.

Where does your style inspiration come from? Girls love your sexy, smoldering look!

I am most comfortable in a pair of worn jeans, an old t-shirt, and some beat up boots. I suppose I have the 1950’s to thank for that look.

When you want to retreat from the busy schedule and work, where do you find your solace and peace?

I find solace right in my own backyard in the canyons of Griffith Park. Those trails have been my sanctuary for the last ten years. Anytime I need to work through a problem or just clear my head, I head straight to the mountain. It’s comforting to know that in this bustling city of ten million people, peace and solitude are always thirty short minutes away at the top of the mountain.

Who are your favorite sports teams and do you have any “cheese heads” moments during your college time in Wisconsin?

I grew up playing baseball in Minnesota so naturally I’m a huge Twins fan. Having lived in LA for the last fifteen years I’ve become a pretty big Dodgers fan as well. Nothing beats watching a ballgame on a warm night at Dodgers stadium with a dodger dog and a cold brew. In regards to my time at the University of Wisconsin, I don’t really recall many cheese heads at the badger football games, but then again I don’t remember much of anything during my times at Camp Randall Stadium. Let’s just say, there wasn’t a whole lot of watching football happening in the student section.

When you were younger, what was it about stage performances that captured your interest and gave you a desire to pursue film and acting?

I got involved in theater late in high school and quickly learned that through acting, one has the ability to affect an emotional change in another, and that resonated with me. We all go to the theater and cinema to be inspired and moved on an emotional level, sometimes to laughter, sometimes to tears. Once I discovered that acting could have such an effect, I was sold.

What was your breakthrough moment when you knew that you had arrived and found your place in film as a success?

Back in 2006, I was working on a series for ABC called Daybreak. My parents were in town visiting from Minnesota and I brought them to set. After getting a chance to watch me work, my parents and I retreated back to my trailer and as we were hanging out, my father says to me “Son, you are doing what you were meant to do. I know you’re going to be just fine in this business.” It was my father’s way of letting me know he was proud of me. It meant the world to me to hear him say that and it was in that moment that I truly felt like I had arrived at a place of success in the business.

When it comes to delectable food or dessert, what’s a secret indulgence you enjoy?

I’m a sucker for some extra crispy Kentucky Fried Chicken.

Can we expect to see more from the series and related film Mortal Kombat? We’d love to hear your thoughts on this fan favorite.

As a hiker, what’s the tallest mountain or terrain you would ever consider climbing?

Mount Fuji and Mount Kilimanjaro are on the top of my list. I would also love to hike the Inca Trail to Machu Picchu. I believe Kilimanjaro is close to twenty thousand feet. That’s good enough for me.