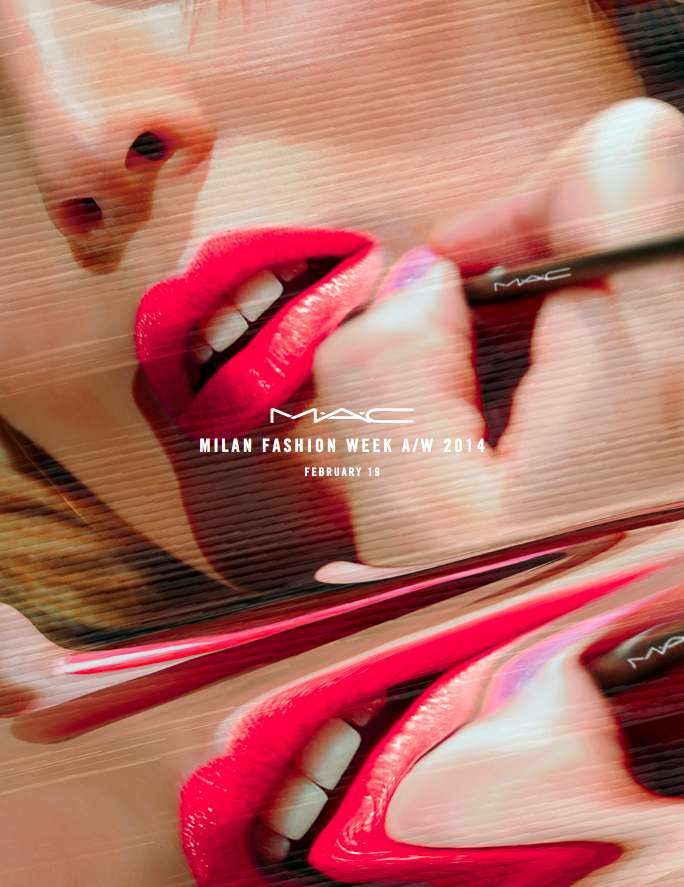 For the Alberta Ferretti show, MAC took inspiration from “Elves in the forest or little birds, illuminated manuscripts,” according to Lloyd Simmonds. Nude was the overall theme for this look, which used Prep + Prime Transparent Finishing Powder on the face and creamy Fresh Brew Lipstick for the mouth. To emphasize their shape, Simmonds said he gilded the eyes and left them looking clean and pure. The nails were kept similarly neutral to represent “American Beauty.” To compliment the wool fabrics in the Alberta Ferretti collection, Keri Blair covered the nails in Gold Pearl Studio Lacquer.

“An L.A. girl going to a party” was seen walking the runway at the Fausto Puglisi show. Michelle Magnani said the beauty look was made to look like the model “did her makeup herself .” To minimize fuss, MAC applied Matte Bronze Bronzing Powder to sculpt and contour the cheekbones, which were then topped with Fun Ending Powder Blush for a flush of color. The eyes were framed with Blacktrack Fluidline for a classic definition of the eyes and treated with mascara on the upper lashes only to separate and define. The lips were finished with a beautiful nude lipstick.

Creating a specialized beauty look, Tom Pecheux made each model at the N°21 show look like “a young girl who doesn’t look so normal.” For a fresh blush to the cheeks, Animal Instinct Powder Blush was applied to the skin. The mouth was treated with a soft nude finish that was lightly patted into the lips. The eyes were illuminated with 3D black glitter layered over a precise liner on the upper lashline.