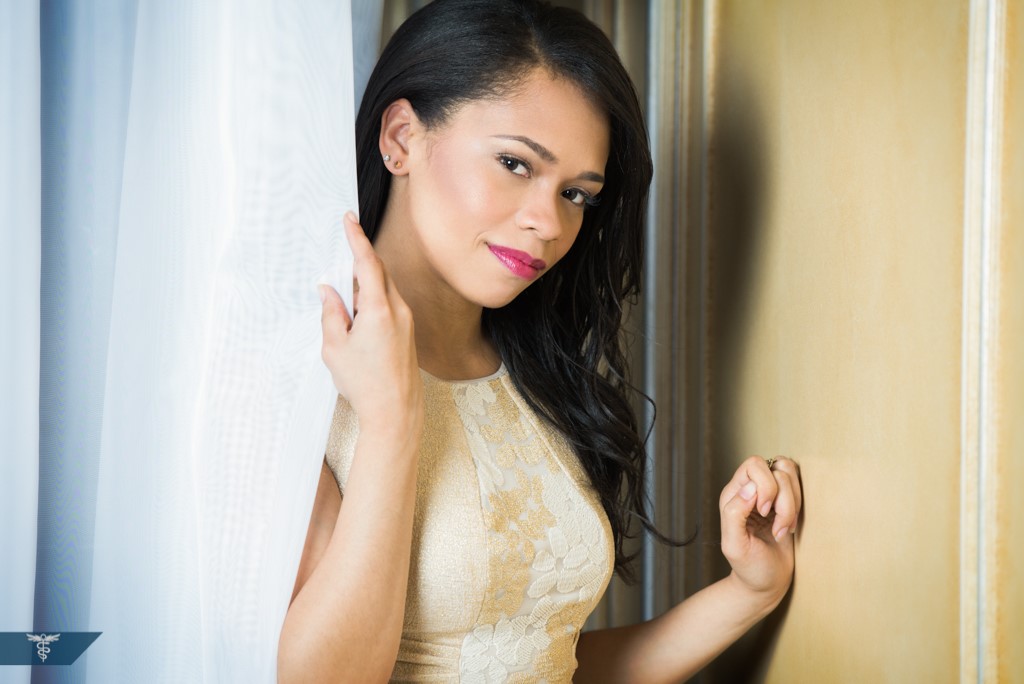 Actor, Comedian, Director and Writer, Laneya Wiles is making her mark as one of the most versatile up and coming talents to watch in Hollywood. Up first, this multitalented actress will share the big screen Vanessa Hudgens, James Earl Jones, Rosario Dawson, and Brendan Fraser in the highly anticipated drama Gimme Shelter which hits theatres TODAY. In a complete 180 from her role in Gimme Shelter, Laneya is also currently making her presence known in New York as a stand-up comedian having recently performed at the famous Gotham Comedy Club, New York Comedy Club, The Stand, Nuyorican Poet’s Cafe, and Greenwich Village Comedy Club to name a few. She also created, directed, and starred in the hilarious web parodies “Straight Hookin” (http://www.youtube.com/watch?v=1lsdFw422gk) and “Beyonce’s Life is But A Dream 2” (http://www.youtube.com/watch?v=bjuT5HscB34).

We caught up with this star on the rise to discuss her range as an actress, upcoming projects, and of course…fashion.

You play a pregnant 15 year old in GIMME SHELTER. What sort of preparation did you do for the film?

In preparation for the film, the other ladies and I actually intermingled with some of the girls who lived in the shelter and got to know them. Meeting and being around the person in which this story is about gave a really clear perspective of it all. All of this gave us the opportunity to get a more well-rounded view of what life and the experience must be like, as well as the familial bond that is experienced in the shelter.

What was it like sharing the big screen with such reputable names as James Earl Jones, Vanessa Hudgens, and Rosario Dawson. Did they give you any advice on set?

It was an amazing and humbling experience to have the privilege of working with James Earl Jones, Vanessa Hudgens, Rosario Dawson, and Brendan Fraser. A few moments that stand out to me was when we were nearing the end of shooting the film, and I had a private discussion with Vanessa on how she felt production was going. I wasn’t necessarily given advice, but I really learned how down-to-earth she was to just have me in her dressing room to talk. So, that’s something I admired…because that’s how I’d always want to remain. She gained weight, changed her overall appearance, was very dedicated to the role, and there was a day on set where I had a midriff top baring my stomach (without the fake pregnancy belly on) and she said, “You have a really nice shape!” You could also tell she missed being “fit-Vanessa”. Other than that, a lot of days a bunch of us girls would listen to music and sing along in the production van, eat together… People are always in awe of stars in Hollywood, but ultimately they are all still just human. Another moment that I vividly remember was with James Earl Jones. James playfully asked me if I had a grandmother around his age. I said, “I do, she’s Puerto Rican. Do you like Spanish women?” to which he replied, “Oui, oui!”

Is it true that you are also a standup Comic? Do tell?

Yes, I also am a comic. I figured all of these ridiculous happenings and the uniquely bizarre situations in my dating life was a great means to creatively vent. I don’t believe in revenge, and was taught how to be able to laugh at myself…so why not make fun of the fools I’ve encountered and my unfortunate decisions? Haha! It was something I’ve always wanted to do, but didn’t always think I was capable of. Once I stepped outside of my comfort zone, learned the craft and jumped in…I loved it. It’s such an adrenaline rush and I love being able to make people laugh…turning a negative into a positive.

Let’s talk fashion. How would you describe your own personal style?

I’d describe my style as ranging from Sophisticated to Edgy. I love the asymmetrical, form-fitting, leather, animal prints, the occasional subtle lace, and sparkle! Since I went to a private school most of my life, I always like to really show my own personal individual style. On dress down day, I dressed up!

Being a New York native, you must know how to dress for the cold. What are your tips for keeping warm while still looking fashionable?

I definitely dress in layers! Here in NY, we’ll walk out in the cold and then go into a building that’s blasting the heat! I definitely own a variety of coats and gloves to coordinate with my outfit for the day. I also crochet my own hats and wear them, too! I absolutely love wearing boots. I personally still try to wear color since it gets so dark already during the winter time and a lot of people just wear black or dark colors. Any chance I could wear a color that pops, I will. I’m addicted to really cute high-heeled boots, I have these Valdini boots that are so warm and still look great.

As a Starlet on the rise, where can we see you next?

I recently finished a new media project called Livin’, you can find me at different comedy clubs around New York City, and I have a couple of projects I’ll be producing in the works, as well!