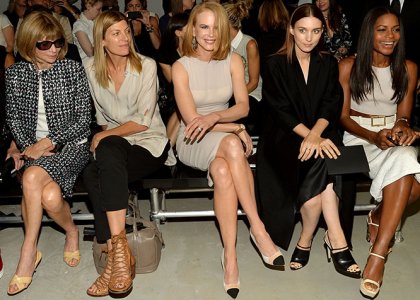 The name on the label still reads Calvin Klein, but the women’s collection is clearly Francisco Costa’s now.

It’s been 10 years since Klein picked the Brazilian-born designer as his successor, and Costa presented his anniversary collection Thursday,

“I hope it’s a little out of the box,” Costa said in a preshow interview. “It’s urban but it’s a mix of cultures.”

Nicole Kidman and Rooney Mara were among those to see the show that moved from the usual Calvin Klein Garment District spot to downtown Manhattan.

Costa said the mix of looks reflected all the sights and textures of New York when he first arrived here in the 1980s. “I was inspired by a lot of energy,” he said.

“Sometimes we forget as we get older what New York is. We think New York isn’t the same, but it is the same — we’ve changed,” he said. “It’s actually better now, there are so many forms of interaction. I hope you’ll see a patchwork of references.”

He did cover a lot of ground. The opening sand-colored wrap tank top and wrap skirt were signature minimalism, save the flash of pink lining, but over the next 35 outfits Costa offered a luxe, refined snakeskin tank and skirt; twill painter’s pants with exaggerated pockets, cuff and rear; and a black woven leather jacket with multicolored thread fringe.

The gears shifted again for a romantic white mesh-black snakeskin halter dance dress, and a black mesh-and-feather dress with a delicate halter neckline. The love affair continued — with Ella Fitzgerald’s “You Can’t Take Away From Me” playing — with a series of retro draped evening gowns.

The unfinished edges on many of the styles was a reminder that Costa’s work at Calvin Klein isn’t done.