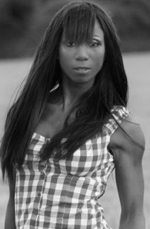 Sinclair is a former model and appeared on a TV program called Miss Naked Beauty in 2008. During her time on this program, she was struck by the great variety of women participating in it. “It just struck me during my time modeling that the industry was really obsessed with the ‘size zero’, and I wanted to make a change,” she says. Although she never experienced this discrimination herself, it was apparent to her that change was desperately needed in the industry. Sparked by a desire to sway the fashion industry away from an obsession over size zero and toward an industry of diversity, Angel headed out to a fashion mecca to promote her cause: London Fashion Week. Her efforts started when she put out a public casting call for supporters to join in her protest. Alarmed at the numerous supporters who answered the call, coupled with 100 donated T-shirts that displayed their cause for diversity, Sinclair and her volunteers headed to the streets and protested the size zero-favoring industry outside all the major fashion shows.

“We made tombstones, with names of all models who died of eating disorders mental illness and drugs and protested outside major fashion events,” says Sinclair. Additionally, she gave out leaflets packed with details as to how the models had died. “It was very dramatic when people were reading the leaflets. There were so many people who died related to beauty or fashion related illness,” says Sinclair. She and her fellow protestors made such an impact that they got invited to meet with the British Fashion Council and discuss their cause.

When asked about her most recent accomplishments in her avid campaign for more diverse models in the fashion industry, Sinclair tells about two major events that have happened recently; “The first accomplishment is the Curves in Couture show, a charity show for healthy, curvy models, which was one of the first plus shows that we put on. We had Tacora, we had Lizzie Miller and we had about three to four US models who modeled with the UK plus models,” she says. Secondly, was last year when she successfully managed to have a disabled model on a billboard during the Paralympics, which so flawlessly presented that beauty lies in diversity.

This year, Models of Diversity is putting together a fashion show called Catwalk of Change on September 6th featuring 20 mature models, aged 35 and up. The second show will be the U.K. Top Bloggers. Bloggers will be taking to the runway in their own fashion show, and all proceedings will go to cancer research MIND, a mental health charity. “All of my shows will have the whole spectrum of models on the runway. We never have a show without models of color, models with disabilities, and mature models,” says Sinclair.

Angel Sinclair is a passionate woman with a lot of fresh ideas that challenge the norm in the fashion industry. Her desire to change the fashion industry with the dramatic protests and fashion shows that showcase diversity on all levels illustrate that she is not going to let anything or anyone get trump her ambition to radiate this awareness globally.