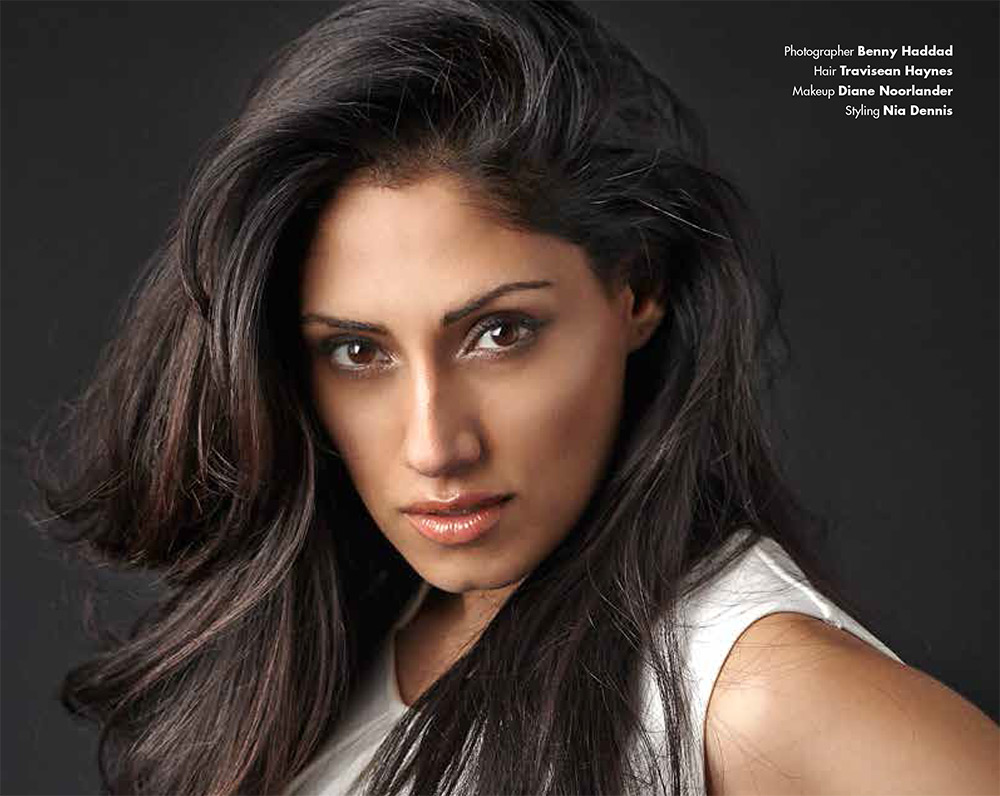 Tehmina, Oh my goodness! You have a serious dream list for a resume for any actor! You have appeared on some of the hottest television shows that include: “Heroes,” “The Newsroom,” “Undercovers,” “NCIS,” “CIS” and now ABC’s new “Mistresses.” What can you tell us about the series and your role of Natalie Wade?
“I am grateful to have worked on many shows of which I am a fan, working with incredible actors. I’m excited for “Mistresses” to air in the summer. My character, Natalie Wade, is a savvy attorney who always wins. Her ruthless approach to her cases always succeeds, as she doesn’t mind bending the rules or using people to win. It was fun playing her.”

As an icing on the cake you also were in Ben Affleck’s multiple award-winning film “Argo”. Continuing the momentum, you are in Roland Joffe’s “Singularity.” Tell us about your role as Sonubai, and what it was like filming an epic love story with an Oscar-nominated director?
“Working with Roland Joffe was one of my best experiences to date. His visual storytelling is profound. His process of working with actors was unique in helping to create their character. I enjoyed playing Sonubai, a power- hungry ambitious female who strives to be in power and become queen. It was filmed in Australia and India, with beautiful location shoots. It really was a dream come true.”

Both “Mistresses” and “Singularity” are set to come out in Summer 2013, so this is going to be a huge explosion for you. How are you gearing up to handle all of the extra attention and higher-level  of fame?
“I love the work I do. Being creative, imaginative and a storyteller is rewarding to me. I’ve never thought that the end game for what I do  would be fame. That actually scares me a little.”

You have such a racially ambiguous look (which is golden for actors) and are fluent in multiple languages. What would be your dream role since there are literally no barriers for you?
“In a world where diversity is getting more prominent, it helps immensely. I just have to keep my accents in tip top shape. I have to be honest, and say my dream role is to be a ‘Bond Girl’. I have always been a huge fan of the Bond movies since a very young age.”

Born in London, and studying Business Information Systems at The University of Leeds in England to become a computer programmer, how does one go from a business degree and 9-5 to being one of the top up-and-coming actors of this generation?
“It was with a lot of hard work. I treat myself like a business and train like an athlete. I don’t give myself anytime off.”
Many people don’t know that you have a gift for playing the violin, viola and piano. You dance ballet, and even know karate. What other hidden talents do you have that we might see emerge in some of your future work?
“Oh, I love singing. It has always been a passion of mine. I would love to play a character where I could sing.”

When you were young you attended a BBC Talent Competition. Even though thousands participated, you were a finalist, even though you had no previous training or experience. That is amazing! A lot of people would say that’s a testament to the old saying “You can’t teach talent, you either have it or you don’t”. What are your thoughts on that?
“Most things in life are attainable, if you are willing to put one hundred percent of your heart into it. There is no greater talent than the talent  of hard work. I am a strong believer of that.

You have a very sultry, sexy appeal on screen as well as off. What are some your top fashion, health and beauty tips to keep turning heads?
“I am a great believer of keeping things simple, because the simplest things in life are the most effective, especially when it comes to fashion and beauty. I am a firm believer in drinking lots of water, living a healthy lifestyle and always smiling.

A little birdie told me that you have a passion for travel! What are some of your favorite places where you have traveled, and where is your ultimate dream destination?
“Some of the most amazing places I have traveled include diving in the Red Sea in Egypt, visiting old ruins of fortresses in India, trekking up the Himalayan Mountains and visiting historical places in Israel. My ultimate destination would be to visit the Seychelles and Maldives, and enjoy an island holiday. That is something I haven’t experienced.”

So I know that summer 2013 cannot get here fast enough with all of your new releases coming out, but are there any other secret gems we can look for you? Are there guest appearances, perhaps even something live on a stage?
“I have just filmed a guest star role on “CSI:NY” which was fun. I have also worked closely with CBS studios for their diversity sketch comedy showcase performing in front of thousands of people. I am also working on an exciting project, which I have to keep under wraps for the moment…”