Home FASHION Boutiques On Wheels: The Future of Fashion 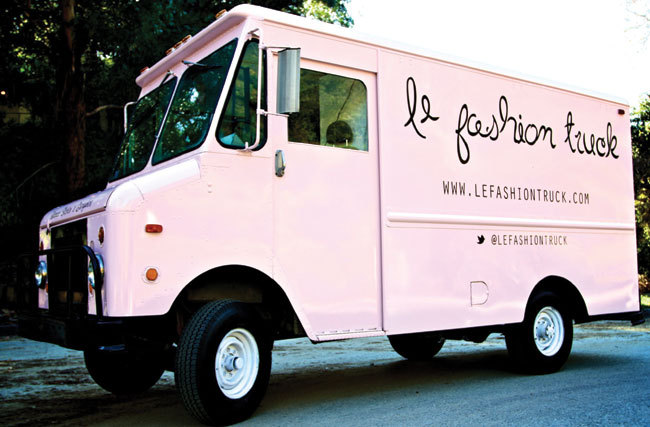 The mobile store was dreamed up by business partners Stacey Steffe and Jeanine Romo. They began their business venture after meeting at a L.A. Arts and Crafts Market in 2010, and started Le Fashion Truck six months later. Being the first official boutique truck in L.A. was a mixture of convenience and brilliance, as Steffe and Romo were seeking an easier way to transport their merchandise to different events. Tired of hauling their products in their cars, setting up booths, then taking them down each week at various flea and farmers markets, they began developing an idea that would help change the way people shopped.

Steffe, who was vending at a farmer’s market in the summer of 2010 recalls the moment the innovative idea came to her.

“…one day the Kogi truck (a popular LA food truck) rolled through with their large crowd of followers,” Steffe said. “…I looked around at the young crowd that had gathered and honestly I was just in awe at the mobile business model. I went home that night and started writing out notes for a “store on wheels” concept and told Jeanine about it a couple weeks later.” Photo by Michael Lemmon, from the Le Fashion Truck website.

Steffe says that the public was excited, surprised, and a bit confused when she and Romo opened their truck for business. Although they had been posting on social media of the idea of a fashion revolution in LA, it wasn’t until their opening night that people were able to see what this “revolution” really was.

Le Fashion Truck carries the latest trends in fashion and regularly receive new merchandise delivered directly to the location wherever they are stationed around Los Angeles. In addition to carrying emerging designers, they also embrace styles that vary from girly to classic to edgy. Customers are thrilled to know that they carry a wide range of sizes from XS to 3X. They also feature unique jewelry pieces that are designed and created by Ms. Romo.

If you do not live around the LA area, fear not! A Fashion Truck may be coming to a town near you! The dynamic fashion duo founded the Association of Fashion Trucks in order to help others start their own mobile reality in different cities around the U.S.

For more information about upcoming events and locations or to shop online, visit their website at www.lefashiontruck.com.