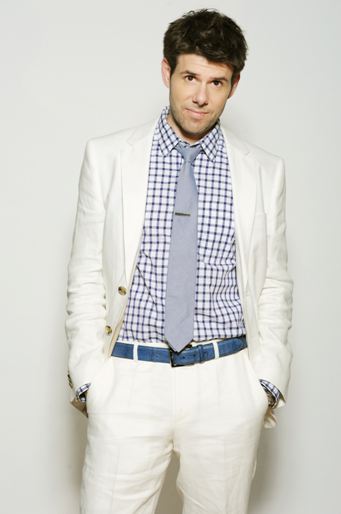 Tell us about your style, are you laid back, or on trend?

I guess if I had to describe my style I would say that I try to go for something classic and elegant, but with a twist. That can mean mixing colors or patterns in an interesting way, or wearing a perfectly tailored white linen suit with a Public Enemy t-shirt. Tailoring is the biggest thing in my book. Men don’t get the same array of options that women do when it comes to design and silhouette, so making sure that whatever I’m wearing fits impeccably and is beautifully cut is my top priority. Ultimately I just avoid trends and listen to my gut. I believe if you put something together and it really works, you’ll feel it.

Who are your favorite designers and why?

When it comes to suits and formal wear, it’s tough to beat Tom Ford. My tuxedo is a Tom Ford and it’s a work of art. Or if I want something really special I’ll also have a suit made with Brioni. I have a handful of suits from the Hugo Boss Selection line and really enjoy them too. For casual wear I love Rag and Bone and Alexander Wang. I also got on board a few years ago with Hedi Slimane’s work at Dior Homme and that interest has continued with Kris Van Assche. I’m a pretty slim guy, so at the end of the day, whoever’s putting creative thought into slender men’s design is cool in my book. John Varvatos, Theory, Paul Smith, Levis Made and Crafted stuff, and a few boutique labels like Matteo Gottardi’s Work. Rest. Karma are also welcome in my closet.

What is your biggest influence when it comes to your wardrobe?

In terms of influence I think first and foremost it’s important to dress for the occasion. I think sometimes men are guilty of trying to look like, “whatever, just threw something on,” and I think how you present yourself matters. I don’t want to look overworked, but I don’t want to look like I didn’t try at all either. I’m a big people watcher, which is why I love New York so much, and it’s easy to take inspiration from what you see people doing – right or wrong. My wife is also a big influence. She has amazing taste and always looks great, so if she signs off on something I know we’re good. I just like beautiful things.

Your character on Retired at 35 seems quite different from yourself, what sets you apart the most?

Like with any character you play, you try to find a balance between what’s unique about the person you’re playing and what’s true in you. So I think what sets me apart from David Robbins isn’t any one thing, but a bunch of little things. David’s pretty open emotionally, whereas I’m a little more guarded; David’s energy operates at a higher frequency than mine – he’s more prone to getting worked up about stuff; and to that point, David kind of wears his neuroses on his sleeve, as opposed to stuffing them down somewhere inside. …So David will probably live longer too.

Your FunnyorDie.com videos are hilarious, why did you decide to make them about the presidential race?

My long-time friend Adam Stein, who’s in the Funny Or Die videos with me, came to me with a sketch he’d written about Rick Santorum. Adam used to write for DAMAGES so it’s safe to say he knows what he’s doing, and I read it and got on board right away. We know some people at Funny Or Die and they thought it was funny too, so they put it on the home page and it did pretty well, so we decided to keep going. It also gives us a chance to work with our friends and just play and have fun. We just shot one with Michael Emerson which is pretty awesome. Also, I mean politics is any easy thing to make jokes about, because it’s kind of absurd. On some level it’s a popularity contest and a referendum on who offends us least. So we decided to take on the role of these two behind the scenes guys who are kind of idiots and have no loyalty, but are addicted to the process and to winning. Politics is one thing everybody has an opinion about and something to which everyone can relate, as the consequences affect us all. So we figured why not make fun of it?