Home ENTERTAINMENT The Most Influential Women of 2011 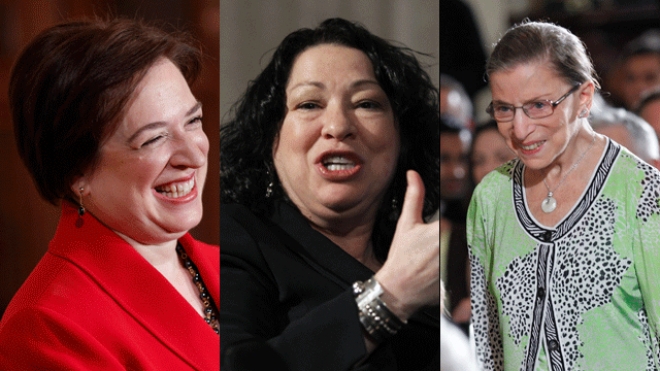 In selecting our list of the most influential women of 2011, we looked for women whose lives and work have had a major impact on American society. The group we chose demonstrates the wide range of women’s influence in government, business and popular culture. These remarkable ladies are role models who inspire every woman to live with conviction and purpose.

For most of our nation’s history, the Supreme Court was occupied exclusively by men. It wasn’t until 1981 that Sandra Day O’Connor broke through the glass ceiling to become the first woman to serve as a Supreme Court Justice. In 2010, the U.S. Supreme Court entered a new era. Now, for the first time, three of the nine justices are women.

Ruth Bader Ginsburg, Sonia Sotomayor and Elena Kagan are all highly qualified for their positions, with degrees from the best Ivy League schools in the country. Each has gained years of legal experience in courtrooms and classrooms and is prepared to bring a female perspective to the Supreme Court’s rulings.

Ruth Bader Ginsburg became the second woman to sit on the bench of the Supreme Court following nomination by President Bill Clinton in 1993. Born in Brooklyn, N.Y., in 1933, she attended law school at Harvard and Columbia as a young mother. Despite an outstanding academic record, she had difficulty finding a job in the male-dominated field of law. She worked as a law clerk and then became a law professor at Columbia, where she was the first tenured female law professor. In the 1970s, Justice Bader Ginsburg headed the ACLU’s Women’s Rights Project and argued several gender equality cases before the Supreme Court. In 1980, President Jimmy Carter appointed her to the U.S. Court of Appeals. As a judge, she is known as a moderate who continues to promote gender equality as well as the rights of workers.

Justice Sonia Sotomayor’s rise to the highest court in the nation started from humble beginnings. She was born in the Bronx, N.Y., in 1954. Following the death of her father, her mother raised her and her brother by working as a nurse, instilling in her children a belief in the power of education. Justice Sotomayor graduated from Princeton University and Yale Law School. Before entering private practice, she worked as an assistant district attorney in New York City. In 1992, President George H. W. Bush nominated her to the U.S. District Court, where she served until being nominated to the U.S. Court of Appeals in 1998 by President Clinton. President Barack Obama nominated her to the U.S. Supreme Court in 2009. She brings to her role as Supreme Court Justice a wide variety of experience in the judicial system. Of Puerto Rican descent, she is the first Hispanic member of the Supreme Court. She is an active volunteer, mentoring young students from troubled neighborhoods and conducting law workshops for inner city youth.

Justice Elena Kagan was born in New York City in 1960. She attended Princeton, Oxford and Harvard Law School. Her legal experience includes time spent as White House counsel and policy advisor under President Clinton. She was a professor at Harvard Law School and the first woman to hold the position of dean. Justice Kagan was nominated to the Supreme Court by President Obama in 2010, becoming the fourth female justice in America’s history.

Oprah Winfrey’s triumph over racism and poverty to become the first African-American female billionaire is the stuff of legend. Her media empire encompasses television, movies, magazines, books, radio and the Internet, making her what CNN calls “arguably the most influential woman in the world.” Her charitable works, philanthropic organizations and political actions have touched countless lives.

Winfrey was born into poverty in rural Mississippi in 1954. She has disclosed that she was raped at age 9 and gave birth at age 14 to a son who died in infancy. She began her broadcasting career working as a news radio anchor while still in high school, later moving from local news to anchoring a talk show. In 1984 she moved to Chicago to host the low-rated AM Chicago morning talk show. Within months her ratings had surpassed those of longtime Chicago host Phil Donahue, and in 1986 she launched the nationally syndicated Oprah Winfrey Show. She became a leader in the white-male-dominated talk show field by introducing a new hosting style that was more personal. Winfrey invested her interviews with empathy and enthusiasm, and wasn’t afraid to share details about her own problems with her audience.

The Oprah Winfrey Show evolved over the years from a tabloid format to become a source of information on health, world politics, human rights, spirituality and a variety of social issues, mixed with celebrity interviews and promotional giveaways. Along the way, Winfrey became an actress, author, producer and head of her own media company. Her philanthropic organization, Oprah’s Angel Network, has raised more than $80 million for charitable projects throughout the world.

This has been a landmark year for Oprah, marked by her decision to retire from her daily television show and concentrate on the Oprah Winfrey Network (OWN) and other projects. The final episodes of The Oprah Winfrey Show were a celebration of this amazing woman’s accomplishments and legacy. There is little doubt that whatever she does next, she will continue to be a major player in entertainment, media and business.

In three short years, Lady Gaga has become a true pop phenomenon. Since coming into prominence in 2008, three chart-topping albums and two sold-out world tours have earned her multiple music awards and turned her into an internationally famous star. The singer-songwriter’s outrageous sense of personal style, inspired in part by Madonna, David Bowie and Donatella Versace, has turned her into a new fashion icon. One of her most famous outfits, the “meat dress” that she wore to the MTV 2010 Video Music Awards, was named as Time magazine’s Fashion Statement of 2010. Lady Gaga has brought fashion creativity and performance art into the mainstream, and in the process has landed on everyone’s lists of the most influential people of the decade.

Lady Gaga began life as Stefani Germanotta in Yonkers, N.Y., in 1986. She attended New York University’s Tisch School of the Arts and was part of the music scene on New York’s Lower East Side. In 2007, while working at Interscope Records, she was discovered by R&B singer Akon and signed to his Kon Live label. Her debut album, Fame, was released a year later-and the rest, as they say, is history.

We resisted the temptation to label Lady Gaga as a “diva” because of the negative connotations that come with the title. At this stage in her young career, she puts her fans first. She is credited with being a self-esteem booster and an advocate for the gay, lesbian and transgender communities. She avoids the tantrums and scenes that often come with celebrity and is an excellent role model for her legions of fans.

The biggest news in television entertainment over the past decade has been the explosion in the popularity of reality shows. For the first time, the genre began to replace scripted comedy and drama as many people’s favorite type of TV entertainment. The Bravo network’s Real Housewives series is one of the most popular reality show franchises, following the lives of affluent “housewives” and professional women in major American cities and suburbs.

Adrienne Maloof became a celebrity in 2010 as part of the cast of The Real Housewives of Beverly Hills, which won a 2011 Critics’ Choice Award for Best Reality Series. A businesswoman and the wife of a celebrity plastic surgeon (her husband, Dr. Paul Nassif, has appeared on Dr. 90210), Maloof was born in New Mexico in 1961. She earned a degree in political science from the University of New Mexico and is now co-owner of Maloof Companies. The family business was founded by her late father, billionaire entrepreneur George J. Maloof, Sr., and includes the Palms Casino Resort in Las Vegas, the Sacramento Kings, Maloof Productions and Maloof Music. In addition to being the mother of three sons, Maloof has focused on marketing operations for Maloof Companies for the past several years. She is also involved in several philanthropic organizations, including Schools on Wheels and the SPCA.

The Real Housewives series is known for the intense rivalries and bitter feuds that often erupt between cast members, but Maloof managed to stay above the fray in the show’s first season. She is one of its most popular cast members, and has built a loyal fan base by giving the public a chance to sneak a peek at her privileged lifestyle while never forgetting that she’s a lady.

If you’ve ever used Google (and who hasn’t?), then you’ve experienced firsthand the influence of Marissa Mayer, former VP of search product and user experience and now the head of location-based and local services for the giant search engine company. Each day more than 400 million searches are performed using Google’s bright, streamlined user interface. Millions of people also use Gmail and Google Earth on a daily basis. Mayer, who has been with Google for more than a decade, spent years leading the team that designs the look and feel of these and dozens of other Google applications; in her new role, she is overseeing geolocation and local services and is part of the company’s operating committee.

With a model’s looks and a taste for Armani and Oscar de la Renta, Mayer hardly fits the stereotype of a tech geek. Yet she has all the right credentials for her job. Born in Wausau, Wis., in 1975, she showed an early interest in science and technology. She earned BS and MS degrees from Stanford University, where she specialized in the computer science field of artificial intelligence. In 2009, she received an honorary doctorate degree from the Illinois Institute of Technology for her trailblazing work in the area of computer searches.

Mayer joined Google in 1999 as the company’s first female engineer. Fortune magazine named her as one of the 50 most powerful women in the world (she was the youngest woman on the list). She was also named by Fast Company as one of 2011’s Most Influential Women in Technology. Now that Mayer is one of the world’s top technology executives, her goal is to remove the stigmas that keep women from seeking jobs in the industry. She wants to spread the message that you can be a tech geek and still embrace your feminine side.