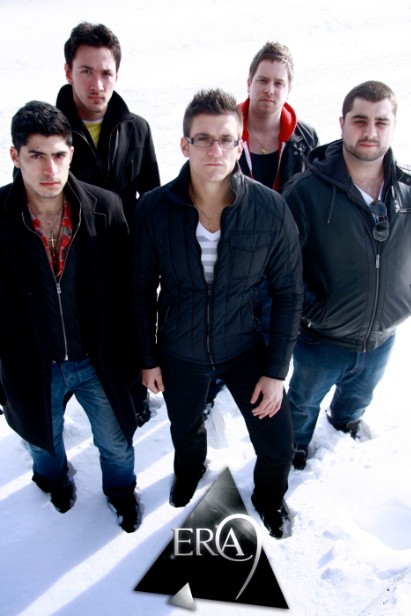 Montreal based rock band ERA 9 is making quite the noise for their genre bending antics, hard-charging rhythms and captivating live performances. In May, the band released their self-titled debut album to a sold-out crowd at Plaza Theater. Not to mention, their first single and music video off the album “Goodnight” generated positive reviews from a steadily growing fan-base. Now with their second music video “Calling Out” on the rise, having already been featured on Musique Plus, ERA 9 is considered one of the breakout bands of the year.

We sat down with the Canadian show-stoppers to discuss their self-titled debut album, rocker fashion, and the clothing items ERA 9 would never be caught dead wearing…

Tell us about your self-titled debut album?

To us, our debut album absolutely had to be self-titled. It’s the first time the world was going to have a chance to hear what we had to say and that gave us the opportunity to emphasize who we are. When listening to the album, you can hear a progression of song-writing, genre influences and style. It’s kind of normal considering that the 10 tracks were roughly written over a three year span by 5 guys with different musical backgrounds. We also had great help from our producer Pierre Pineault who really solidified many of the song structures. Overall, we benefited and learned from his experience which all translated into ERA 9’s debut album.

Is there a specific story behind how you came up with the unique name ERA 9?

We wanted to choose a band name that didn’t necessarily have a clear meaning to it. We wanted our music, our sound and our words to define what ERA 9 meant. Ironically, it just so happens that we are, according to certain historians, living within the “Big Era Nine” as they call it. We would definitely love to take a crack at defining the rock music of our generation! (Laugh)

How would you describe the bands overall style? Jeans/t-shirt or more fashion forward?

Overall I’d say we go for the jeans, t-shirt, leather jacket and Ray-Bans look. Each member has their own personal favorite accessories whether it be necklaces, bracelets or watches. On the other hand, we don’t shy away from a more formal look like a buttoned shirt or V-neck under blazer with jeans, still keeping the accessories on. Also, loving those checkered & plaid patterns!

Do you believe fashion and music are reflective of one another?

Fashion and music are both forms of self expression and we’re blessed with the ability to do both. Some of our favorite artists (like Lady Gaga) are not only breaking boundaries with their music but with their fashion choices as well. As far as we’re concerned, they are both art forms.

What are some of the bands favorite designers?

We like designers/brands such as Guess, Diesel, Michael Kors, American Apparel, Jack and Jones, Calvin Klein & Zara. Basically, we wear anything that we feel good in. We’re pretty open-minded.

What item of clothing or trend will you never see ERA 9 wearing?

If we are not attending an all-white party I doubt we would be wearing white shoes or belts (laugh), we don’t know how to make those items look good with our wardrobes. Also, none of us wear hats; although, I don’t see why it wouldn’t be a possibility in the future. We would NEVER wear latex or leather pants, zebra print or some other funky weird design. It’s just not our style.