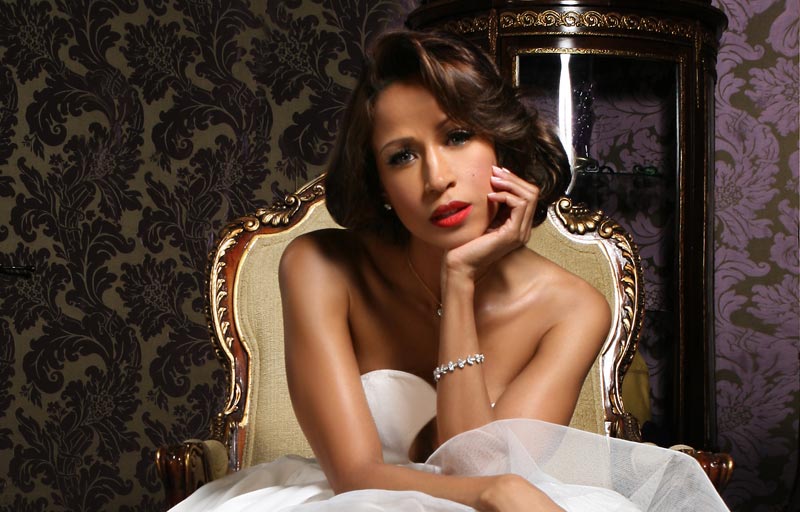 Her youthful appearance has always worked to her advantage. She got her first big break when she was cast as Dionne, a high school beauty, in the hit movie Clueless in 1995. Although at the time she was in her late 20s, she convincingly played the comedic role of Alicia Silverstone’s best friend. In 1996, her role was reprised in the popular Clueless television series, which aired until 1999.

Over the years, she has steadily worked as an actress in both television and movies, landing parts in The Fresh Prince of Bel-Air, CSI: Crime Scene Investigation, Eve, The Game and Mo’ Money, to name a few. She has also become a favorite of the hip-hop community, appearing in music videos alongside stars like Kanye West, and most recently in the Rick Ross music video for “Super High.”

Last summer, Stacey was cast in a movie called Single Ladies, which follows three best friends with different philosophies on sex and relationships. Produced by Queen Latifah’s production company, Flavor Unit Entertainment, the movie explored what women really want from a relationship. Stacey was cast as an aspiring fashion mogul-a woman coming out of a heart-wrenching breakup and facing being single for the first time in years. When VH-1 executives saw an early cut of the movie, they decided to make their first foray into the hour-long scripted series genre. Described as a “modern, sexy series set in the world of Atlanta fashion, music and celebrity,” the series Single Ladies has been in production since February of this year.

We caught up with Stacey as she was wrapping up filming on the set in Atlanta.

Runway: So you’re starring in a new movie and a new television series, Single Ladies. Tell us about it.

Stacey Dash: It’s about three ladies, one newly single, maneuvering through the dating world in Atlanta and trying to find their own “happily ever after.” My character is Val. She’s the ultimate optimist. She’s a determined, hardworking and independent businesswoman who will not settle for anything less than true love.

R: Val is a stylist and boutique owner. What is her fashion style?

SD: Val’s fashion style is constantly evolving. It’s inspired by iconic fashion figures of the past, and she puts a contemporary spin on it.

R: Do you have input into what your character gets to wear?

SD: Absolutely. [Fashion consultant] Anthony Williams and I have total control when it comes to the vision of Val’s style.

R: Who are your personal favorite designers?

R: You’re in great shape. What do you do to stay that way?

SD: I eat healthy, I run and I work out with a personal trainer who does a very strenuous, athletic workout with me four to five times a week.

R: What do you like to do in your time off?

SD: I’m a mother, so I’m focused on my children and am working on a few projects I have in the making.

R: What other projects do you have in the works?

SD: At the moment I’m building my battered women shelter task force and working on a skincare line and lifestyle brand. I also have a book coming out called How to Stay Dashing, which should be released by the fall.

R: In three words, how would you describe your life right now?

SD: Creating my future! The Single Ladies movie will premiere on May 30 on VH-1. The eight-episode series premieres on June 6.