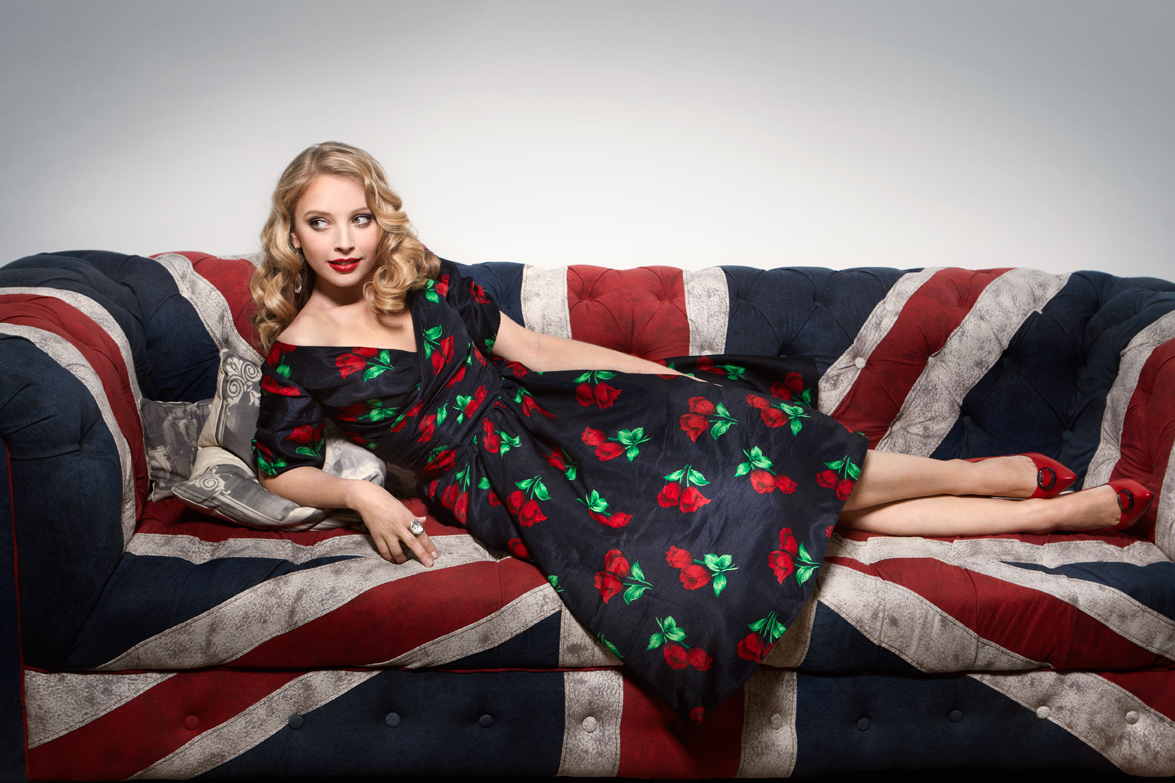 At the age of five Elisabeth soared into films, starring in One Magic Christmas and Where Are the Children. This year, she shines in her role as Dr. Serena Warren in the CBS network’s Miami Medical. Up next for this sophisticated beauty is her role as a Martian in Disney’s upcoming stop-action film Mars Needs Moms, opening March 11. “This is one of the most challenging jobs I’ve ever done,” explains Harnois. “As ‘Martians’, we created our own language which was a lot of fun. I felt like a child again and enjoyed stepping outside normal conventions.”

We met this busy actress after a day of filming to talk about her already-long career, her sense of fashion and find out how she stays so together.

Runway Magazine: Thanks for coming to meet us tonight – we know you have a lot going on right now. Tell us about what started all this.

Elisabeth Harnois: I was 3 years old and it was a Duncan Hines cake commercial. I had to shove chocolate cake in my mouth over and over and then say “Deluxious!” You know? I got paid to eat cake all day, it could have been worse.

RM: When did you first realize your love of performing?

EH: I was two and a half years old. My parents took me to church so I could see the children’s choir. I asked if I could go up and sing with them. The choir director asked my mom if I knew how to read and handed her a hymnal. My mom said no. I screamed, “Yes I do!” I grabbed the red book, stood up with the choir, and sang my heart out. But I made sure to hold the book up just below my eyes so no one could see my mouth.

I think at a certain point my folks realized I loved performing and  thought I could put all that madcap energy to good use, so I started  doing it professionally at 3 years old. I feel so lucky that my  parents allowed me to explore that side of myself so early in life. A lot  of people see it as a negative, but I had a good family, none of whom were in the business or had any aspirations to be in it – that helped. Truthfully though, it was a hobby at that age. It wasn’t until [I was] 11, when I was cast to play ‘Alice’ in Disney’s  Adventures in Wonderland, that I began to really understand what being an actor meant. There, I was surrounded by brilliantly  talented Broadway actors who taught me so much about the struggle  and the joy of storytelling, and really developing a character – that’s when it evolved from a fun hobby to a real profession that  challenged me. Loved it then and now.

RM: Early on, you worked on Highway to Heaven.

EH: Working with Michael Landon was a magical experience. He was very nurturing, sweet and funny. If you’re going to be on a set as a child, his is the one to be on.

RM: Who else has helped you along the way?

RM: Those are some big names for a young actor to get to work with. How do you keep yourself so grounded?

EH: I was raised in a large family with four little brothers – that alone will definitely keep you grounded! Growing up, they’ve always had this magical skill of sensing when I might be feeling a little too popular, and when that happens, they promptly remind me of how many times I had to change their diapers or wipe their behinds or run screaming from my bathroom because they planted a big black garden snake under the toilet. Little brothers are the great equalizer…. But most importantly, my folks raised me with a very clear sense of how quickly things can change, how they come and they go, and that because of the fleeting nature of this business I should always have a pretty damned good idea of who I am as a person outside of it.

RM: Who or what inspires you on a daily basis?

EH: My Mom. She’s a rock star. Professionally, I’m inspired by actors and musicians who seem to always work from a place of genuine truth and authenticity. If Jeff Buckley were still around, I’d grab onto him and not let go.

RM: So how do you unwind after a crazy day in the entertainment industry?

EH: After a long day of pounding the Hollyweird pavement, I unwind quite simply by going home to my man, my 3 dogs, my 2 birds, and my rabbit. No, I’m not kidding. I sit on my soft couch and catch up on whatever my latest junk food escapist programming is at the time. I have no shame in admitting some of my more base addictions, like The Real Housewives of Beverly Hills. But I also love comedy and cooking so there’s a lot of 30 Rock and Top Chef prescribed for my post work recovery. Running, reading, snowboarding, wine…

RM: And when things get really challenging?

EH: Meditation, prayer and being introspective help me. And my dogs – because they are so nonjudgmental.

RM: You started acting so young. Have you ever thought about what you’d be doing now if you weren’t performing?

EH: I love food. I love cooking. I’d go to culinary school and then I’d open a place.

And, not to sound like a cliché, I know I want to direct. I majored in film at Wesleyan University and I plan to continue down that path.

RM: Ok, on to fashion! Do you have a favorite designer?

EH: It would have to be a tie between Alexander McQueen and Tom Ford. I really admired Alexander McQueen – his death was a tragedy and when I look at his clothes I think to myself, there’s a story there. I also played a small role in A Single Man directed by Tom Ford. He was so meticulous about detail – even when he tied a scarf on my head.

RM: Tell us about your own, personal style.

EH: My daily style is very comfortable and yet classic. Most of my things are classic pieces that I can bring out from five or six years ago and feel good in. My style is very much defined by me.

RM: Any favorite, go-to pieces in your closet?

EH: I have a pair of shoes by Christian Louboutin that always come through. I also have a pair of boots from Venice Italy made by a cobbler located on a little side street – they fit like a glove and are like a hybrid of a cowboy-slash-riding boot. They’re my favorite pair and will probably last forever.

I’m [also] not a super girly girl but it’s that time of year when I can bring out that side of me. I’m very big on the flowy dresses. I have this great little Phillip Lim cotton dress that will never go out of style.

EH: I splurged on a pair of Stella McCartney skinny dress pants with zippers on the ankles – so versatile and beautiful.