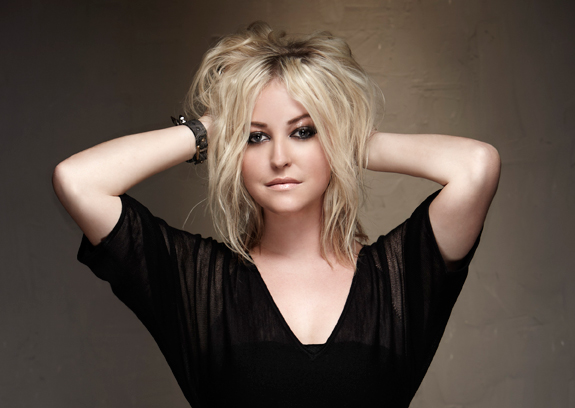 For fashion-forward musician Samantha Marq, the more shocking the ensemble, the better. But she keeps a rock-solid method to her edgy fashion madness; she balances her wardrobe with inspiration from just about every musical genre.

It seems as though Marq has always been surrounded with music culture and fashion. She grew up watching her father Michael Marquart (a former member of the new wave ‘80s band, A Flock Of Seagulls) run Windmark Recording, a prestigious recording studio frequented by the likes of Justin Timberlake and The Neptunes. After graduating from Pepperdine University, Marq met rapper/producer K.O (Britney Spears, Lil Flip) who has helped put her bold composition on the map. A combination of hip-hop, R&B and brave beats characterize Marq’s music, which she has described as a mix between Justin Timberlake, Aaliyah and the Black Eyed Peas.

This fair-haired bombshell’s debut CD, The Evolution of Love in Dysfunction, catalogs a time in her life when she was falling in and out of love, with each track representing a different diary entry. Her first single, Supergirl, established her as a rising star. And with an array of upcoming projects, some with high-profile artists, Samantha definitely won’t be missing the “marq” anytime soon.

Runway: Can you share with us some of your upcoming projects?
Samantha Marq: Right now I am working on the release of my second single called I Like to Party. I am really excited because The Cataracs and Dev remixed it and it sounds amazing! It’s coming at a perfect time too – their song Like a G6 with Far East Movement is #2 on the Billboard Hot 100 right now. I am also working on a mix-tape to be released at the end of November and my album titled The Evolution of Love in Dysfunction will be out at the top of the year.

R: Winter 2010 is packed full of fashions, new and old, surprising and boring. What are you most excited about?
SM: My favorite winter fashion trend would have to be leggings. I love leggings more than anything! They are so comfortable and you can wear them with anything. You can dress them down or dress them up. I’d have to say they are a definite staple in my winter wardrobe.

R: Which fashion are you least excited about?
SM: My least favorite (current) winter trend would have to be shearling clogs. I know that clogs are making their comeback but I don’t think I can jump back on that bandwagon.

R: What designer fits your personal style?
SM: There are so many designers that I absolutely love but I would have to say that Alice + Olivia takes up a majority of my closet. I love that their clothes are edgy, but classy enough for everyday wear. Plus, the pieces generally fit me really well – it’s nice to not have to get anything tailored. I’m also a huge fan of Robert Rodriguez. I have this one-shoulder long-sleeved dress from him and it is, hands down, one of my favorite dresses in my closet.

R: How has fashion affected your lifestyle?
SM: I love that fashion is a way to be creative and express yourself every day. My entire mindset changed when I came to the realization that getting dressed isn’t just putting on clothes; you are essentially painting a picture. Once I figured that out, I started to really notice fashion on the street, on TV and in magazines, and then draw inspiration from what I saw. Now I take pride in what I wear more than I ever did before, and as a result, I have a greater confidence about myself.

R: Everyone has had a fashion moment that hasn’t been their, well, proudest. Can you share your most embarrassing fashion moment?
SM: I have to say in high school there was a span of a few years where my fashion was only slightly less than horrifying! However, I did wear this uniform Boy Scout button-up once, thinking I was being fashion-forward, but I obviously failed miserably. My friends, to this day, still make fun of me for that outfit.