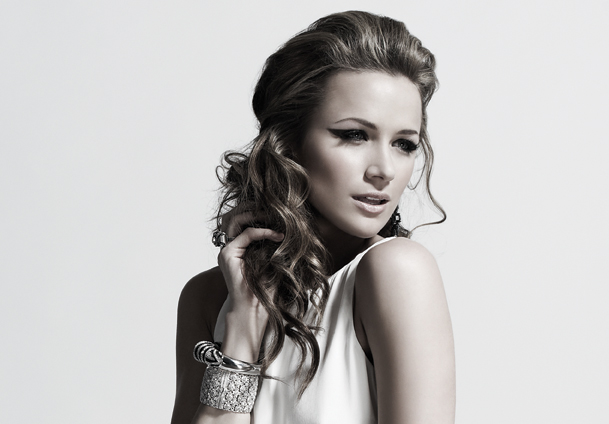 Born in Minnesota and later moving to Texas (where she eventually graduated from Texas Christian University in Fort Worth), Shantel was snapped up as a model at age 15. She later appeared as one of the finalists on NBC’s reality television series Sports Illustrated: Swimsuit Model Search, and then moved on to work in such films as The Final Destination and You and I. She is currently making her mark as the wilful, strong-minded and introspective “Quinn James” in the television series One Tree Hill. We love watching Shantel on screen for both her talent in portraying such a multi-faceted character and also for her eye-catching wardrobe, which creates the trendy allure of a girl who knows what she wants.

Runway: In many respects, you are now in a more exciting place in your career. Can you identify what has highlighted these changes both personally and with your character in One Tree Hill as Quinn James?

-Shantel: Despite my Mother telling me I have been a performer my whole life; it truly started for me in the confines of a small acting class in Dallas. I feel very fortunate BEING where I am today and there are so many things I credit to getting me here. The growth in my career has been one of the biggest blessings I find myself grateful for TODAY. STARTING IN FILM and breaking out in THE television world has been a huge HIGHLIGHT for me. WORKING WITH THE CASTAND CREW OF “One Tree Hill” and playing Quinn is one of the greatest opportunities I have been given. ALSO, the characters I have told stories through, IN FILM AND TELEVISION, PLUS THE people I have worked with and the places I have shot , have been HUGE highlights IN CHANGING WHO I AM TODAY. There is so many roles I would like to explore and I TRUST this is only the beginning of the journey.

Runway: Quinn proves she can face her fears -like walking into an ocean of uncharted waters. What does this mean metaphorically to you in your own personal conquests and challenges?

-Shantel: First of all I AM actually afraid of the ocean… and joining this show and cast that was already established felt much like this. I have learned in my life that facing your fears is something from which you can truly grow. I used to fear failure – more than anything in my life – however I have learned you can grow from the struggles and obstacles life hands you.

Runway: I love Quinn’s ability to let go without losing the part of her sensitive side that allows her to learn and grow in her relationship with Clay. Does this represent shedding part of her old character?

-Shantel: I don’t think the term “old” or “new” character works because the past defines who we are in the present. Everyone grows and learns from experiences we have. For Quinn, it has been a process of growing up as a woman and GROWING EMOTIONALLY within her new found relationship. She is finding the confidence to love again and find the kind of love, which two people can grow from. Clay and Quinn went through a lot last season WHEN it started off with a friendship, which allowed their relationship to then form and blossom into something magical. I believe she always followed her heart and you can never go wrong when you do that!

Runway: Quinn wears some fabulous outfits in the series. Would you say they would be part of what you would choose to include in your personal wardrobe?

-Shantel: I LOVE Quinn’s style!!! She stays true to her artistic roots and is laid back but when she needs to, she can put on a fabulous dress…it’s effortless and chic. There is always a cool trinket or necklace we try to incorporate as an accessory, which was inspired by A desire to personalize my character. I have been very fortunate to work all over the world and my travels definitely influence my personal clothing collection. I always try to take home some type of vintage piece WHICH represents that place for me. I think Quinn being an artist and world traveler would APPRECIATE THAT. Fashion is something I have always lived for since the first pair of gold pumps I got from Payless. Shoes have become a weakness or if I may say an obsession… ok, ok an ADDICTION J! They are essential to an outfit…

Runway: Shooting in Wilmington, North Carolina, must be beautiful. How is living there different than living in LA?

-Shantel: North Carolina is BEAUTIFUL AND DEFINITELY a world away from Los Angeles in respect to many things. It has so much to offer with the beaches, climate, and history and I appreciate the differences. They do become blaring obvious once you have lived in LA. Fortunately living here, in a small town, you get to focus on your work and not get lost in everything else. You also get to be more in touch with the fans that take vacations to come meet us!

Runway: Can you tell me about any upcoming projects?

-Shantel: As of now I am working on making season 8 of One Tree Hill … season GR8! (GREAT) Over the summer I completed a movie WHICH WE filmed in Berlin called “Remembrance”. I have been reviewing scripts for some other amazing projects, which I have my eye on when we wrap!