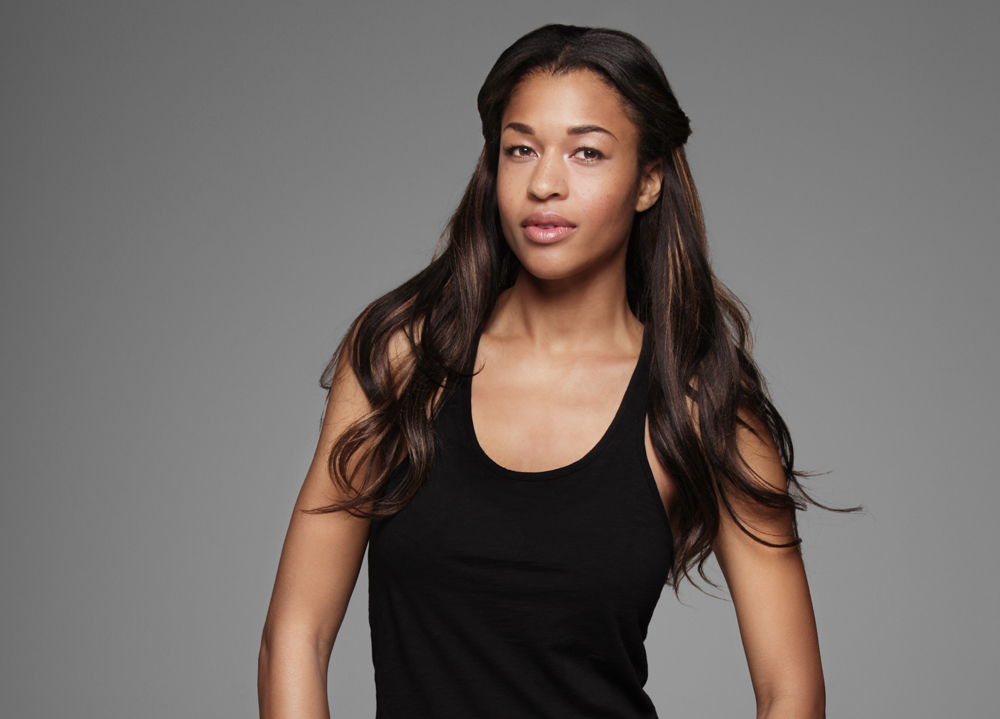 As a child growing up in Manhattan, actress Kali Hawk excelled academically. So it is not surprising that acting was not high on the list of professions that her parents envisioned for their young daughter. Although they may have had some inkling, after her production saving performance in an elementary school Christmas Pageant. When some of the children ran off stage crying or refused to go on, Hawk, cast as the Virgin Mary, grabbed their costumes and played their parts as well. “I could always memorize all of the other kids’ lines,” Hawk explains. After the show, audience members approached Hawk’s parents, predicting that their daughter was destined to be a performer.

By the time she was 16, Hawk had completed high school and enrolled in the prestigious theatre arts program at SUNY Purchase. She spent one year at the University before focusing on acting full-time. After a stint performing in plays on the Lower East Side, Hawk made her way out to Hollywood.

Hawk arrived in Los Angeles with no car and no driver’s license. She enrolled in a driving school and in a typical display of what she likes to call her “New York chutzpah,” once commandeered the school car to go on an audition. Driving along unfamiliar roads at “about one mile an hour,” Hawk kept motioning for other cars to go around her. Luckily, she made it to her destination and was able to get a ride back home.

With regard to her personal style, Hawk has very definite ideas about what looks good on her. She comes by it naturally. Her mother was a buyer at Bloomingdale’s and her father was in merchandising for Barney’s New York. Her mother always encouraged her to take a fashion look and make it her own. “Never pick something off the mannequin”, she warned,” Unless you want to see ten people walking down the street in the same outfit as you.” In fact, Hawk is so identifiable by her keen ability to accessorize that a studio executive once recognized her from behind, simply from the sight of her handbag (it was a favorite Burberry leather bag).

When asked about her favorite designer, Hawk is characteristically decisive. She is devoted to rising star Joseph Altuzarra. He dressed Hawk for the premiere of her film, Couples Retreat, and she plans to wear one of his designs at the premiere of her new movie, Get Him to the Greek.

Hawk is tall (5’10”), thin, and describes her body type as athletic. “I’m not waifish, I’m more of an Amazon,” she says, explaining why she is also passionate about the designs of Versace. “The Italian designers know how to enhance a woman’s curves, so you feel less apologetic and more triumphant.” She sometimes asks a stylist to try to work Versace’s clothes into the wardrobe of a character she is portraying. “A Versace dress makes you look very expensive. You put it on and you look and feel like a million bucks.”

For casual wear, Hawk is a fan of clothes by Marc Jacobs. “Marc draws you in with his metallics and sheers,” she says, sitting by her pool in a Marc Jacobs dress. She confesses that she doesn’t even own a pair of sweatpants, or a pair of sneakers for that matter, preferring instead to walk tall in high heels (4-inch Yves St. Laurent and Dolce and Gabbana shoes are favorites).

Kali Hawk seems to be on something of a career fast track these days, working with names like Vince Vaughn, Jon Favreau, and Jason Bateman on Couples Retreat. “I’ll always have a warm spot for that group of people,” says Hawk. Reflecting on the career trajectories of Favreau and Vaughn since their days in Swingers, she says, “It’s very encouraging and inspiring… it reminds you that, as an actor, you can be in control of your career.”

Produced by Judd Apatow, Get Him to the Greek has a cast that includes Jonah Hill and Russell Brand. Despite any images of frat-like behavior this gathering of Hollywood heavyweights might conjure up, she says that there was a definite “family vibe” on the set. “Just to be a part of that energy and creativity was amazing,” says Hawk, who has been a long time devotee of Apatow’s films.

With two more upcoming films, Answer To Nothing and Trivial Pursuits, as well as a TV pilot in the works, Kali Hawk feels very fortunate and her parents are somewhat less anxious about her career choice. As she says: “Sometimes believing is a job in and of itself.”