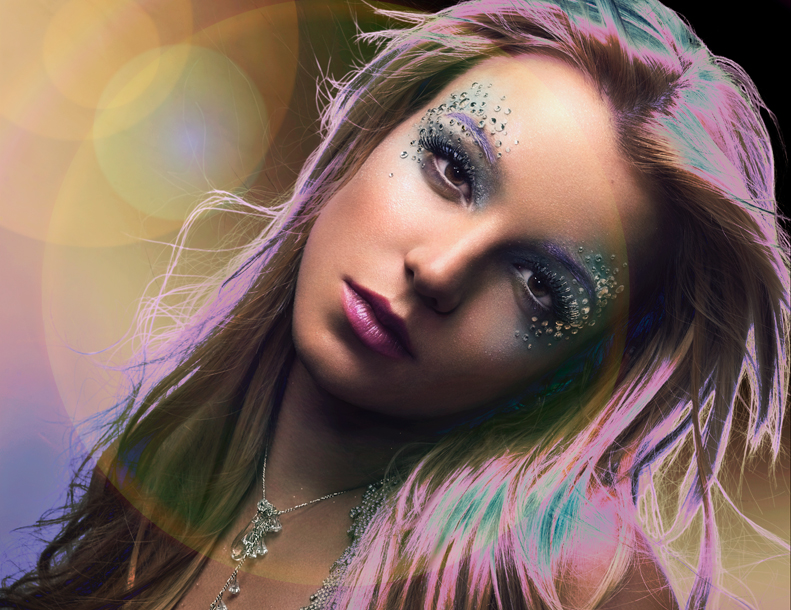 Rewind to the discovery of Klinko and Indrani by Isabella Blow: Their first magazine cover was for the London Sunday Times, which in turn provoked David Bowie to request that they design his Heathen album cover. From then on, the duo created award-winning covers for Beyonce’s solo debut Dangerously in Love, Mariah Carey’s Emancipation of Mimi and Mary J. Blige’s The Breakthrough, all top-selling albums.

Photography was not the original destination or dream of either Markus or Indrani. Klinko, French-Hungarian and Swiss, studied music from 3-years-old and had a career as one of the world’s top classical harp soloists. He decided to follow his passion for photography after receiving the “Grand Prix du Disque” in 1994 for his recording with the Paris Opera Bastille Orchestra. At this time he met Indrani Pal-Chaudhuri, a Calcutta-native who grew up between Canada and India. From the age of 14, Indrani began her blossoming career as a fashion model. Along with a BA in Anthropology from Princeton University, her studies included meditation, philosophy, photography and film.

“I’m committed to uplifting people every way I can, through my school in India, by adding beauty and inspiration through my art, through bringing people behind the scenes to understand the creative process, and through my upcoming book published by Harpers One, Image Craft, helping people to define themselves and to recreate themselves to achieve their goals,” reveals Indrani.

With a wide range of cultural experiences and interests between them, Klinko and Indrani bring photography that is memorable with strong imagery, displaying models and celebrities in a light rarely seen. “Our goal is to highlight those qualities which make our subjects unique and extraordinary: their power, aura, and divine spark. We use our multiplicity of perspectives, our great passion, light, movement and fashion, to provide layers of meaning that resonate on a deep level with very different kinds of people, creating unforgettable images that define our subjects and what they represent to the world,” explains Indrani about the driving force behind their photography.

When asked about their most daring or favorite photo shoots, they both prefer international locations. “We shot at my ancestral home in India, a 250-year-old 300-room ruins, where I’ve built a charitable school with my father. That was the most extraordinary for me, bringing my 2 passions together,” enlightens Indrani, while Klinko elaborates on his favorite: “Indrani found a spectacular underground temple in London that was used by the free masons. We loved it and decided to make it the set for our Lady Gaga’s shoot for Hello Kitty’s 35th anniversary. “

With such an impressive list of clients, it’s no wonder why Bravo green-lighted a reality show featuring the life and work of Klinko and Indrani. Not only will it provide an inside look at the fast-paced world of high fashion and couture, but it will also give a glimpse into celebrity photography and personalities. There is no doubt that this show will be high-energy, high-stress and surprisingly sexy (with two attractive stars and high-profile celebs, how could it not be?)

“We invite the viewers to follow us to an unprecedented behind the scenes experience, getting a very close look at what really goes on behind the closed sets of celebrity and fashion shoots. It is real and raw and each shoot is a bit of an adventure. Our famous subjects include Lady Gaga, Lindsay Lohan, Naomi Campbell, Dita von Teese and many others. It is fast paced and full of unplanned comedy moments,” describes Markus.

Although people such as Klinko and Indrani in the spotlight may sound as if they act superior or egocentric, this pair doesn’t give off that vibe when it comes to charity work. Indrani is the co-founder and fundraiser for the non-profit Shakti Empowerment Education. “I founded this organization with my father 12 years ago. We provide free education to 300 impoverished students from kindergarten to high school, and literacy and vocational training to refugee women in my ancestral home in West Bengal, India,” says Indrani.

They have also donated their photography to Keep A Child Alive in order to raise awareness and help bring life-saving anti-retroviral treatment and care to children and families in Africa with HIV/AIDS, as well as other third-world locations.

Kate Beckinsale at the Gate