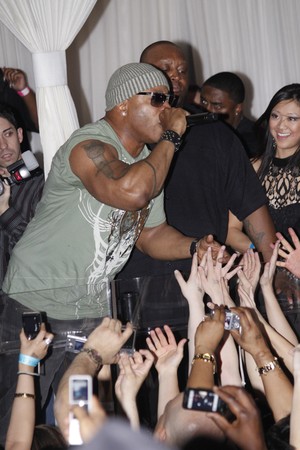 It was an exciting Saturday night at PURE Nightclub as LL Cool J hosted the evening and gave clubgoers a very special performance.

Dressed in a green t-shirt, jeans, sunglasses and a grey beanie hat, LL Cool J was joined by a group of friends who enjoyed Grey Goose vodka drinks, while he sipped Dom Perignon champagne. After taking time to pose for photos and shake hands with adoring fans, LL Cool J treated club patrons to a performance during which he took requests from the crowd and sang some of his greatest hits, including popular songs “Mama Said Knock You Out” and “Headstrong.”

At one point during his performance, LL Cool J took a moment to mention the crisis in Haiti, retelling the story of a 24-year old survivor found today and reminding the crowd to keep the hope alive.

Also at PURE Nightclub on Saturday night were Duane Chapman, better known as Dog the Bounty Hunter, and his wife Beth, who sat a few booths away from LL Cool J and came over for a quick photo after his performance.